When Miss Bates saw the bucolic, small-town romance look of Donna Alward’s latest, The House On Blackberry Hill, she was afraid that one of her favourite category romance writers had gone the way of treacly-sweet-eat-pie-at-the-local-diner-to-be-cured-of-your-bright-lights-big-city ennui. Step right into a Thomas Kinkade world. In category romance, Alward’s canvas contains small towns, but they’re Albertan small towns (how MissB loved the Argentinian-set one) with grasslands, modern cowboys, and space demanding independence and solitude. In her latest effort, the town is small and picturesque, Jewell Cove on Penobscot Bay in Maine, but the canvas is broader, the narrative development expansive and involved. Alward is a romance writer of subtlety and complexity and House On Blackberry Hill, though its trappings have the feel of small-town contemporary romance and some of its elements are derivative, its characterization and narrative unfolding are signature Alward: thoughtful in its portrayal of love’s messiness, family, guilt, coming to terms with the past, growth, acceptance, redemption, and the road to happiness. Alward’s palette shows growth in this novel and growth, as we know, comes with growing pains. Alward’s Her Rancher Rescuer is one of Miss Bates favourite 2014 reads: it’s tight and zippy and interesting, with heroine and hero who have to grow up and extend their understanding to be together. We find no less in House On Blackberry Hill, but Alward also weaves family history, creates places and houses who are as much characters as heroine and hero (Abby Foster, school teacher and heiress of the “house on Blackberry Hill, and Tom Arsenault, contractor) an interweaving of three love stories, two of which are tragic, one of which is set in WWII, and a ghost story. It took Miss Bates much longer to “get into” this novel than the instantaneous love she feels when she opens one of Alward’s categories romances, but it won her over, surprised and moved her. It reminded her of Karen White’s Tradd Street series in mood and circumstance, but containing a more complete, more satisfying romance.

“Abby couldn’t help but think these little towns were painted so cheerfully as a form of defiance against the tragedy that always seemed to surround them.” Abby Foster arrives in Jewell Cove determined to deal with her surprise inheritance of a dilapidated mansion and substantial fortune from her Great-Aunt Marian. Brought up by “Gram,” Marian’s estranged sister Iris, in Nova Scotia, she doesn’t know anything of her Maine roots. The house is in serious disrepair, but it’s also fascinating: full of nook, cranny, vintage clothing, antique furniture, family photos, and secreted albums, letters, and diaries. It is haunted by a tragic love triangle and several lugubrious ghosts. Of all these elements, the ghosts were the least successful, Miss Bates thought. But Miss Bates is not a fan of the woo-woo. Abby is lonely and alone. Parents and Gram no longer with her, she yearns for family and belonging, but is wary of all connection for fear she will, once more, be abandoned. Miss Bates loved how Alward demonstrated Abby’s growing sense of belonging to her family’s past as she  discovers family secrets and history, especially when she decides to stay in Jewell Cove to renovate the house. The town’s welcoming denizens, especially Tom’s extended family, draw her in, give her a sense of doubly belonging. Abby is a character made for close friendships; her response to navigating friendship’s waters, as well as romance’s, making her a deeper, even more sympathetic one. Miss Bates appreciated Abby, her ability to think for herself, to weigh her choices, to be honest, affectionate, forgiving, and open to change. As the quotation above indicates, Abby doesn’t have any illusions about the small-town magic wand of healing, but she’s prepared to acknowledge and embrace what it offers. Jewell Cove, like most small-towns in contemporary romance, is painted in utopian colours, a response to urban loneliness and alienation. It is akin to Alward’s description of Tom’s cottage: “The cottage had a way of quieting a busy mind and a hurting heart.”  However, Jewell Cove is not without conflicts and problems (okay, there are also crafting projects, but they’re kept to a minimum) but its people and their tragedies are nuanced and interesting and not all their endings are happy, or neat.

“Tom had been in love with his cousin’s – with his best friend’s – wife. And he still felt like shit about it.” Tom Arsenault, Alward’s hero, is Abby’s renovation contractor. Darkly handsome, he hides a lot of guilt and grief behind his oh-so-capable and flirtatious demeanour. Indeed, his and Abby’s meet-cute skirted the twee of the small-town romance meet-cute to near turn off Miss B., but hey, Alward, so she stuck it out. Doing so unearthed as many treasures in Tom’s personality and past as it did in Abby’s. Again, things are not simple and they sure are interesting. Tom was in love with Erin, but Erin married Tom’s cousin, Josh, because Tom’s labourer status wasn’t “enough” for Erin’s parents … but Erin was still in love with Tom and Josh knew all along. Erin and Josh enlisted and went off to Iraq: Josh came back and Erin didn’t. Guilt, loyalty, fidelity, family, friendship, loss, grief … so much Americans and Canadians contend with in the aftermath of our latest Middle Eastern involvement. Alward does such a good good job of this in the confrontations between Josh and Tom, and in the sad, broken figure of their friend, Rick Sullivan. Alward’s purpose was to echo a similar tragedy in the WWII story of Abby’s great-grand-mother, Edith … sadly, this aspect of the novel, which had the potential to echo Brockmann’s early Troubleshooters books, was not as convincing, or engaging as Josh-Tom-Erin, rather melodramatic and convoluted.

“Tom was a world away from the pain of her past, a brand new page and she could write upon it whatever she wanted.” What of Abby and Tom? What of their romance? Tom has been burned; Abby is cautious and wary about any attachments to people, or places. They are a couple at cross-purposes. They also have to come to terms with their pasts. Both, however, are honest, affectionate (though with a capacity for sharp words that makes for great dialogue; an equal capacity for loving gestures that makes for the romance), thoughtful, and forgiving. Their HEA is well-deserved. It is easy to envision them happy twenty, or thirty years down the line. One of the ways that a romance works for Miss Bate is in a particular treatment of the hero, which Alward fulfills hands down, with varying degrees of success, but success nevertheless. The pattern Miss Bates prefers as a reader is for the hero to be redeemed by loving the heroine and the heroine to be completed by loving the hero. Alward is one of those romance writers who fulfills Miss B’s reader-heart. Her latest effort seems to reflect trends in contemporary small-town romance combined with gothic elements, but its execution is, nevertheless, simply lovely.

Donna Alward’s The House On Blackberry Hill is yet another romance worth reading and thinking about; therein, Miss Bates found “a mind lively and at ease,” Emma.

The House On Blueberry Hill is published by St. Martin’s Paperbacks and has been available at the usual vendors, in paper, or “e,” since April 29th. A sequel, Treasure On Lilac Lane, will be released in October.

Miss Bates is grateful to St. Martin’s Paperbacks for an e-UDG, via Netgalley, in exchange for this honest review.

The review’s subtitle is the closing line to Richard Lovelace’s (1618-1657) “To Lucasta, Going To the Wars,” for which Miss Bates is grateful to The Poetry Foundation.

Miss Bates found Alward’s creation of a personality to Abby’s house more interesting than the apparitions that seemed to inhabit it. She loves romances that are imbued with a strong spirit of place; that doesn’t always mean “small-town” to her. (One of the things she likes about Julie James, for example, is a sense of the urban landscape in which her characters move). What romances have you read, dear reader, where the authors make this an essential element? She can definitely say so of Karen White’s Tradd Street series (the ghosts are more interesting and successful there, though the romance is so-so). 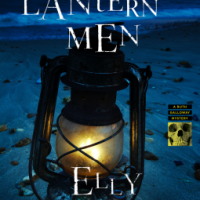