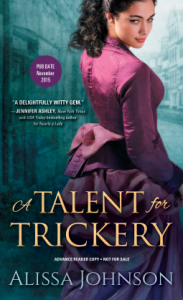 Miss Bates’ first great rom-love was the historical. Given the recent contemporary romance glut, she’s grateful for any historical romance writers she discovers. Alissa Johnson is not new to the genre (début publication dates 2008), but certainly new to Miss Bates. A Talent For Trickery is first in the Victorian-Age-set Thief-Takers series. Johnson’s characterization, plot, and theme reminded Miss Bates of Lisa Kleypas’s Hathaways (if you liked the Hathaways, you’re going to like this). Viscount Owen Renderwell arrives at Willowbend House, Norfolk, with his detecting partners, Sirs Samuel Brass and Gabriel Arkwright. He is reluctantly welcomed by his former-thief-turned-agent-for-the-crown partner, Miss Charlotte “Lottie” Bales, formerly Walker, daughter of Will Walker, notorious criminal. In eight years, Charlotte built a new life and persona for herself and her family. Owen reminds her of days of yore when she helped her father swindle London society. She shares a home with Esther, her sister, and Peter, their younger brother, for whom Charlotte would make any sacrifice to keep him from discovering the truth of their father’s life. Abandoned by their mother, father perishing while aiding Owen recover a kidnapped duchess and her jewels, Charlotte’s memories of working alongside and yearning for Owen return in full emotional force. Owen is equally affected, but his mission carries more weight than his physical desires and emotional yearnings. Mrs. Maggie Popple was murdered and Charlotte’s father’s letters and journals may hold the key to solving the crime. Lottie has the talent and know-how to decipher Will Walker’s encryption.

The first third of A Talent For Trickery is original and compelling. Johnson plays the reunited-almost-lovers trope beautifully. Neither Owen nor Lottie have forgotten t’other, but their feelings are complicated. Owen never acted on his attraction/affection because Lottie was only 18 at the time. Lottie, on the other hand, is furious with Owen over her father’s treatment. She is convinced that Will Walker redeemed himself by helping Owen in recovering the Strale diamonds and duchess and blames Owen for not giving him due credit. Owen knows Will Walker was only ever out for number one. Lottie’s family loyalty and desire for her father to’ve been better than he actually was serve as blocks to her and Owen’s attraction and liking.

One of Johnson’s accomplishments is the dialogue, even snippets give an idea of a how snappy and interesting it is. Lottie confronts Owen with ” ‘You’re still alive, I see,” and he ripostes ” ‘And you’re still angry.’ ” Their banter continues with Lottie gaining the upper hand: ” ‘ … like most members of the nobility, you’re inconsistent, self-centred, and something of a dolt.’ ” They’re fun! But their banter is also borne of pain, self-doubt, and resisting their feelings and desires. Johnson is as good at tenderness as she is at sarcasm. Owen and Lottie share this exchange:

“The opportunity to prove one’s superiority to one’s fellow man are bountiful. I enjoy any number of them.”

She laughed at that. “You make it difficult to have an earnest discussion.”

“You make it difficult to have an easy one. You should laugh more often. With me,” he qualified and leaned over to lightly cup her face in his hand. “You should laugh with me.”

… She reached up, intending to draw his hand away. Instead, she simply covered it with her own. For one brief moment, she held it against her cheek. She didn’t want to push him away. She didn’t want to relinquish his touch. But nerves got the better of her. “Perhaps I shall,” she said  …

In the narrative’s course, Johnson’s shows us how Owen and Lottie learn to understand one another, compromise, and be friends. Miss Bates greatly appreciated that there was only one love scene and it came after Owen and Lottie realized their love. There are a few passionate kisses and yearning gazes, but the tension is as much emotional as physical. This makes for great romance. And, phew, there are no Big Sekreets – Lottie and Owen speak, work things out, and share their thoughts and feelings.

A Talent For Trickery, however, moved out of splendiferous territory when it turned into a conventional romantic suspense narrative. Instead of Lottie and Owen working together to capture a killer, the killer’s sights turn to Lottie and family. Owen turns into a conventional romantic suspense alpha-protector and Miss Bates’ enthusiasm for Johnson’s historical romance deflated. The suspense wasn’t edge-of-your-seat either. On the contrary, three crack agents seem to have so much trouble catching one inept fish-out-of-water perpetrator. When Owen emerges from alpha-unreasonableness and communicates with Lottie, and these occasional exchanges are sustained up to the HEA, Miss Bates realized why she stuck with the novel. Johnson is a fine writer; the dialogue, particularly fabulous. A Talent For Trickery veered away from characterization to an excess of plot and definitely sagged in the middle. Overall, however, Miss Bates enjoyed it. With Miss Austen, she’s says that A Talent For Trickery offers “real comfort,” Emma.

Alissa Johnson’s A Talent For Trickery is published by Sourcebooks Casablanca. It was released on November 3rd, 2015, and may be purchased at your preferred vendors in e- or paper-book. Miss Bates is grateful for an e-ARC from Sourcebooks, via Netgalley.

2 thoughts on “MINI-REVIEW: Alissa Johnson’s A TALENT FOR TRICKERY” 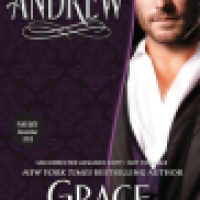