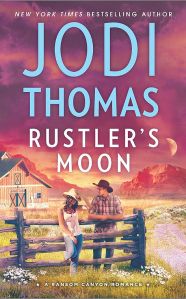 Jodi Thomas’s Rustler’s Moon is the third Ransom Canyon romance. Miss Bates liked the first one, Ransom Canyon, and reviewed it with much lauding. In Rustler’s Moon, Thomas continues to weave several narrative threads set in the allegorically-named, fictional town of Crossroads, Texas. Thomas recounts four story-lines, some of which end in an HEA, while others are HEA-pending. The main story-line and HEA-concluded romance is the bantering, wooing story of Angie Harold, newly-arrived and sole curator of the Ransom Canyon Museum, and Wilkes Wagner, local rancher and historian. Thomas continues the story of Yancy Grey, ex-con and custodian and protector of the “old folks” living at the Evening Shadows Retirement Community. She also continues the story of Sheriff Dan Brigman’s daughter, Lauren, experiencing her first year at Texas Tech and trying to negotiate a relationship with the driven Lucas Reyes. Thomas introduces the character of septuagenarian Carter Mayes, whose memories of cave paintings of stick figures haunt him still sixty years later and bring him to Ransom Canyon in search of them every spring. Alternating story-lines in third-person deep POV, Thomas captures something about small-town romance that many of its writers miss. She creates an authentic sense of community because she doesn’t sacrifice her secondary characters to one-dimensionality. It may be she sacrifices all her characters to one-dimensionality – Miss Bates leaves that judgement up to Rustler’s Moon‘s readers.

Rustler’s Moon opens on Anne Marie Island in Florida and a grieving Angela “Angie” Harold. An only child, she’s lost both her parents. Angie is “utterly and probably forever alone”. Her father’s recent death leaves her without reason to stay and be fodder to her nasty Uncle Anthony, her father’s boss, and his equally pernicious wife. There be other reasons for Angie to hightail it. Her father’s death smacks of gangster-ish shenanigans and the note dad left for her seems to suggest her life is in danger. Angie takes the Ransom Canyon Museum job and finds herself in the bosom of a town that takes care of its own. Trouble follows her, this “mouse of a warrior,” but rescue and friendship come in the form of one gorgeous cowboy, Wilkes Wagner. Protection and friendship also take form in his comic-relief Uncle Vern, the dour, but stalwart Sheriff Brigman, and many more of the town’s eccentric denizens.

Ostensibly, Angie and Wilkes are typical of both small-town contemporary romance and its suspenseful version. Angie is innocent and shy, plump and bookish, inexperienced and vulnerable. She inspires all of Wilkes’s protective instincts. Wilkes, in turn, is brave and strong, experienced and a handsome heart-breaker. He carries a psychic wound from his first girlfriend, Lexie Davis, who wrote a Dear John letter faster than lightning when he left Texas to serve his country. Since then, though 32 and the long-suffering recipient of his Uncle Vern’s matchmaking efforts, he keeps his heart free of emotional entanglements. With Angie, he finds himself prey to incipient tenderness, a desire to hold her hand and kiss her, take care of her and keep her by his side forever. Wilkes resists with humour and amazement. Angie is a tad down on herself; short and curvy, she can’t believe a looker like Wilkes would be interested in her. When Angie’s past shows up in a Mercury Marauder (Thomas does like to wink at allegory), Wilkes and the rest of the town, including the old coots and sheriff, stick close. Wilkes sticks so close, he falls in love with her.

Miss Bates often thought this sounds small-town fey, cutesy, and derivative. But Thomas always threw a wrench in Miss Bates’s reviewing works. Just when Miss B. thought she knew exactly where the narrative was going, Thomas would surprise her. Thomas would do so by never lapsing into sentimentality, sentiment, strong and moving, but never sentimentality. Humour is Thomas’s weapon and she wields it delightfully. Miss Bates offers one example from early in the novel when Angie and Wilkes meet. Their meet is cute and surprisingly wry. Wilkes has just had an Uncle Vern talking-to about finding a wife and he quips to Angie that he wants to marry her because she fulfills Uncle Vern’s criteria. When she balks, his response and her thoughts are hilarious:

“Look, much as I’m turned on by your plain, gray suit and those practical shoes, I’m not in the habit of proposing to complete strangers on first contact.” … She could only stare at the insane man. Maybe there was too much inbreeding in this country. He looked all right, close to perfect actually. Tall, handsome with his sandy-blond hair and blue eyes. From boots to Stetson, he was dressed as if he’d walked off the cover of a romance novel. Too bad he was brain-dead.

Or, when the danger to Angie’s life reaches worrisome levels, Wilkes convinces her to stay at his house. Her emerging from her cabin with cat in tow (Wilkes hates cats) is also funny:

“We’re ready,” Angie said as she stepped out of the cabin and handed him Doc Halliday. The cat hissed, and Wilkes growled back. They were off to a great start.

Miss Bates snort-laughed her way through many of Angie and Wilkes’s exchanges. Their humour was infectious; their attraction, endearing; their HEA, in an opposites-attract kind of way, totally believable. The one fade-to-black love scene embodied Miss Bates’s three C’s for love scene perfection: culmination, commitment, and celebration. She’d have liked a little peek into the bedroom, but she’ll settle for Wilkes and Angie’s sure happiness.

The other three interweaving story-lines were equally enjoyable. Yancy Grey thinks he’s haunted by the Gypsy House that also featured in Ransom Canyon. While fighting off bad guys and protecting Angie, Wilkes puts on his historian hat and Angie her curator’s and they help Yancy figure out what connect him to the Gypsy House. In solving the mystery of Yancy Grey, Thomas weaves a lovely identity story into her narrative. In the story of Laura Brigman and her first college year, which never turns out to be all parties and fun, but an at times painful, at times empowering realization of learning the ways of the world and independence, she weaves a lovely coming-of-age narrative. But most lovable of her story-lines is that of Carter Mayes and his search for the stick-figure cave paintings. With the help of his new-found friends, Wilkes’s Uncle Vern, and an elderly Cherokee, Jake, Carter sets out to hike the canyon and finally determine whether the figures were real or a figment of his childish imagination. Miss Bates adored this line: “All three smiled. For a moment they weren’t three old men in their seventies. They were wild boys looking for an adventure.” What they find and experience in the age-old canyon is poignant and beautiful.

Nevertheless, Rustler’s Moon has its flaws. The suspense narrative peters out. At one point, Wilkes’s ex shows up. She has the evil ways of the derivative “other woman” Miss Bates dislikes. There’s a whiff of fat-shaming in the Franklin sisters’ portrayal, though they’re wonderful and charming in every other way. They too are part of the protect-Angie contingent. Sometimes, small-town world-building, in the plethora of characters and voices, did make for one-dimensional characters. Miss Bates can’t deny that Thomas also managed to show growth and change in many of them, especially her primary characters, Wilkes and Angie. Despite its weaknesses, Miss Bates loved being in Ransom Canyon/Crossroads with Thomas’s characters and wants to be there again – where people are good and decent without sentimentality, where the lake and mountains exude peace, where people look out for each other, and where eccentricity reigns with humour and good will. With her reading companion, Miss Austen, Miss Bates says Jodi Thomas’s Rustler’s Moon shows evidence of “a mind lively and at ease,” Emma.

Jodi Thomas’s Rustler’s Moon is published by HQN Books (Harlequin) and was released on January 26th, 2016. It is available in paper and e-format at your preferred vendors. Miss Bates is grateful to HQN Books for an e-ARC, via Netgalley.