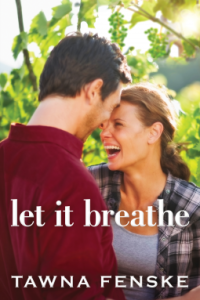 For a while, it looked like contemporary small-town/rural romance eclipsed historical. Historical is slowly in the ascendant and contemporary looks stale. Or at least those have been Miss Bates’s feelings lately. Then, Tawna Fenske’s Let It Breathe: a perfect combination of humour and pathos, second chances, and sundry laugh-out-loud moments thanks to a hilariously motley crew of secondary characters.

Reese Clark, thirty-four-year-old divorcée, manages her family’s Oregon wine business, Larchwood Vineyards. She has big plans to expand the business by building a new tasting-hall, hosting tours, and getting LEED-certified. In her meagre spare time, she fosters injured wild animals and plays straight-woman to her outrageous grandpa, Albert, aka, “Axl,” her cooingly-in-love parents, her wild-living cousin Larissa, and Eric, vintner ex-husband, and Sheila, his wife. Clay Henderson re-enters their lives. He’s the Dorrington Construction manager and the man Reese has loved since college, Eric’s best friend, and the alcoholic everyone rescued and succoured until one night fifteen years ago when Reese didn’t bail him out. Clay Henderson is four-years sober-and-serious and back to build Reese’s vineyard-dream and make amends.

Clay and Reese are wonderful characters. Reese has stagnated, or at least that’s what her crazy family and best friend and ex-husband tell her. They want her to date, get out there and not always be the one to run things, to be the responsible one. Staid and responsible is what Reese has been since she went to college to learn the vineyard trade and make her family’s business the oenophiles’ go-to place. There she met a wild and wildly-good-looking young man, Clay, and spent years bailing him out of scrapes. She cared for her orphaned cousin, Larissa, and Larissa now works as Larchwood Vineyards’s PR person. Like Clay, Larissa’s wild living needs a lot of bailing. And then there’s the charming octogenarian grandpa,  dubbed “Axl” when he did a stint in jail, and now hell-bent on making the family fortunes by growing “medical” marijuana. Axl provides the reader with full belly-laughs. Miss Bates’s loved him, Reese, her nutty still-going-strong-sexy parents, Larissa, Clay, the lot of them!

Though he once-was-wild, Clay returns a changed man. He stopped drinking and re-made his identity to squeaky-clean knight-in-shining armorhood. He’s made himself into everything he thinks Reese would want, though his my-best-friend’s-ex reticence helps him resist her beauty, vulnerability, and the spark that says “she’s the only woman for me”. One of the many strengths of Fenske’s romance novel is her hero’s and heroine’s personal growth. Reese finds it in herself to let go, have fun, and let others take care of her sometimes. Clay finds that sobriety doesn’t mean erasing every part of himself that was connected with his drinking days. He’s no less a responsible knight-in-shining-armor for recovering his alpha-ness. Frankly, when he does a reverse-alpha proposal at the end, it’s one of the best humble non-grovels Miss Bates has ever read. Fenske’s novel is a joy, but it’d be worth reading for Axl and the non-grovel alone. BTW, Clay and Reese’s journey to love is absolutely terrific.

“Well, well, well,” he said, dropping into the seat beside Clay and running a hand through his wispy white hair. “If it isn’t the guy who face-planted in my granddaugter’s wedding cake.”

“And got arrested for pissing in the ashtray at Finnigan’s.”

“And plowed down a row of Reese’s thirty-year-old Zin vines on a riding mower.”

Albert pulled off the aviator sunglasses – bifocals, Clay realized – and looked at him. “I always liked you.”

Clay hadn’t seen that coming. He swallowed, wondering when the lump had formed in his throat. “Thank you. I always liked you, too.”

Miss Bates couldn’t help but love these exchanges, of which there are many. They’re funny as heck, yes, but there’s that little note of sadness, that moment when Clay is affirmed and feels it deeply. Clay’s alcoholism was his numbing and now that it’s gone, he’s a great hero because he lets himself feel. He’s humble and careful of others. His obvious Reese-adoration is irresistible, especially in light of his struggle to stay sober.

Fenske’s romance novel is never far away from both a laugh and a tear. When Clay first sees Reese, she’s in full vineyard-crisis-mode. She’s also carrying a little critter in her flannel shirt pocket:

“It’s a baby opossum I rescued,” she said, touching a finger to her shirt pocket. “I didn’t grow a mutant nipple, in case that’s what you’re thinking.” She saw his Adam’s apple bob as he swallowed.

“I wasn’t thinking about your nipple. Or anyone’s nipples.”

Reese takes a lot of these pot-shots at Clay and he bears them well. He’s a hero who knows how to apologize without debasing himself. But the reader recognizes Reese’s point of view as well: there was no way, in the few drunken flashbacks we have of Clay and Reese’s college days, that she could’ve been with him then. And there’s enough betrayal  on Clay’s part to merit the pot-shots. But romance can’t be made of recrimination. It can’t be, it wouldn’t be romance. Love and forgiveness, understanding and empathy, this is the stuff of romance and they fit Clay and Reese so so well.

Fenske is also an unassumingly fine writer, striking a balance between droll and sad. She’ll occasionally produce a delightful little metaphor, like this one: “Reese watched as he [Clay] ambled over to the cases and hoisted one like it was filled with cotton balls.” As you may recall, dear reader, Miss Bates loves a romance writer who can convey and base a scene on body language. Indeed, Miss Bates thinks this one of the romance-writer’s master-class tests. Well, Fenske can. Here’s a hilarious scene with Clay, Reese, her cousin Larissa, and a sleaze-bucket named Bob:

Reese grimaced and folded her arms over her chest again, this time trying to squash her cleavage down instead of up. Beside her, she felt Bob lean closer. She watched Clay’s eyes narrow. On her other side, Larissa squealed again. She shook her head at Clay and looked at Larissa. She was staring into his eyes now, those pools of root-beer-hued light pulling her in.

Marvelous, isn’t it? Because Fenske’s body language rendition tells you exactly what these characters are feeling and thinking. Reese is awkward, embarrassed, but responsible Reese is the one looking out for everyone, making sure peace is kept. Clay’s jealousy and protectiveness are ready to take Bob down; Reese reads him and responds with that slight head-shake that bespeaks their communication as a couple, even before their relationship reaches this point. Larissa, into her cups, is oblivious to everyone and everything but having a good time. And then Reese loses herself in Clay’s “root-beer-hued” eyes: metaphorically delightful and romance-entrancing prose. Fenske’s as good at writing banter-dialogue-less scenes as she is at what’s dialogue-evident above.

On a final note, because Miss Bates has only quoted from about the first third of the novel, here’s a snippet of what Miss Bates likes to call love’s inevitability, another moment the genre is good at: ” ‘Good night, Reese.’ ‘Goodnight, Clay,’ she repeated, and closed her eyes as fifteen years’ worth of stupid longing came surging back.” Just to make sure that you’re getting Miss Bates’s message: read Fenske’s Let It Breathe. With her reading-collaborator, Miss Austen, Miss Bates says Let It Breathe is evidence “there is no charm equal to tenderness of heart,” Emma.

Tawna Fenske’s Let It Breathe is published by Montlake Romance. It was released on March 22nd and is available at your preferred vendors. Miss Bates is grateful to Montlake Romance for an e-ARC, via Netgalley.