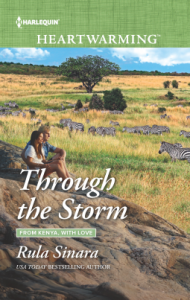 (With this Miss Bates’s 299th review, she confesses to a slight and temporary change of direction. Miss Bates has taken new professional responsibilities at the day-job and must curtail her reading and blogging activities. The plan is to post a mini-review once-a-week. Gone, for the present, Miss Bates’s deliciously loquacious review-posts. In their place, what Miss Bates hopes will be shorter reviews, still helpful and interesting to her readers.)

Through the Storm is Rula Sinara’s third From Kenya, With Love romance. Miss Bates loved and reviewed the first, The Promise Of Rain. Heroine Tessa is married to Brice Henning and bringing up her nephew, her sister’s son, Nick. Maria and husband Allan were killed in an airplane crash. Brice offers Tessa what she’s craved since a child, stability, safety, security. Growing up with environmentalist-sailing parents, Tessa lived a childhood of fear, always apprehensive her parents would never return from their dangerous missions. With the loss of her sister, Tessa’s fear are re-awakened. When she suspects her husband of taking part in the unethical ivory trade, she must expose him. But first, she must ensure Nick’s safety.

Nick has suffered greatly from his parents’ loss and struggles to regain emotional equilibrium. He’s angry, rude, and desperately unsteady. Tessa tries to offer Nick stability and love. Her recent discovery of Brice’s perfidy leaves her reeling: who is this man she married, but never loved, who gave her financial security but grew further and further away from her? Tessa turns to co-guardian, Maria’s brother-in-law, Nick’s Uncle Mac Walker for help. She travels from South Africa to Kenya to seek him.

Mac owns the struggling Air Walker Safaris, based on Kenya’s Serengeti. He’s an adventuring and dangerous-living kind of guy, but wants to do right by Nick at least financially. His life-style doesn’t allow him to have Nick living with him. Mac helps local animal rights activists and the Busara Research and Rescue Camp with their main denizens, the very elephants Brice Henning’s unscrupulous business destroys. Tessa and Mac’s reunion is difficult. They’ve been at loggerheads through their sister and brother’s courtship, marriage, and parenthood. Mac’s devil-may-care attitude clashes with Tessa’s caution. Tessa doesn’t respect Mac’s need for unfettered freedom and Mac thinks Tessa sold out her principles and ambitions to marry rich. Beneath their antagonistic inter-jabbing are attraction, reluctant liking, and admiration.

Miss Bates thought Through the Storm an uneven read. It possessed admirable qualities, but carried faults. Its weakest links were vague, “unformed” characterization and a tone/mood incongruous with a romantic suspense plot. Miss Bates never had a good sense of Tessa, or Mac. Sinara filled them in, so to speak, with childhood experiences that rounded out their adult decisions. Miss Bates doesn’t fault her for that. She did, however, make their perceptions of each other sufficiently harsh that their recovery from them isn’t convincing. The romantic suspense plot is patchy. It gains intensity, then peters out, falters, and draws to an abrupt, anti-climactic, “what-a-minute-what’s-happening?” conclusion/resolution. Rather than find total fault with these elements, Miss Bates would say that the novel’s problem, if problem it is, is Sinara’s great love for, and rendition of, the Serengeti and its creatures’ beauty. They prove more interesting than Tessa and Mac. A land and life described as “simple, beautiful, and raw,” the narrative came alive with every description. The Serengeti, the Masai, the elephants and other animals are the best of the novel’s characterization.

The romance between Tessa and Mac was at near-nil. Always, there was the problem that Tessa was married, even as she came to realize she didn’t, and never had, love(d) Brice. Nevertheless, as two ethical people aware of the wrongness of acting on their attraction and feelings, there couldn’t be much romance to speak of. Like the suspense plot, the romance had to coalesce, at the end, hastily and somewhat awkwardly. Through the Storm is worth reading for its wonderful setting, Sinara’s genuine love of its animal and human denizens, lovely prose, and the inspiring thematic and metaphoric thread of making it through life’s “storms”. Flawed but worthy, with Miss Austen, Miss Bates says Through the Storm is “almost pretty,” Northanger Abbey.

Rula Sinara’s Through the Storm was released on April 19th. It’s published by Harlequin Books and may be purchased at your preferred vendors. Miss Bates is grateful to Harlequin for an e-ARC, via Netgalley.

8 thoughts on “Mini-Review: Rula Sinara’s THROUGH THE STORM”