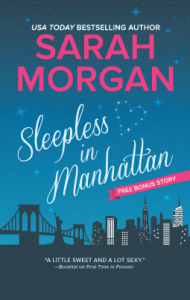 Miss Bates was never a fan of Sex and the City‘s cynicism about love. It was a show more about sex and friendship than love, despite its final concession to the HEA. One could say that Sarah Morgan’s first “From Manhattan With Love” series title, Sleepless in Manhattan, could be likened to “sex and the city”, but shouldn’t be. If it draws readers because it ostensibly echoes Sex and the City, then, so be it and more success and readership to it! But Morgan’s romances are never cynical, conceding to the HEA with one hand and nodding to the divorce rate with the other. Morgan’s romances are funny, loving, sentimental (MissB is tired of the pejorative sense given to the word), and hopeful. Sleepless In Manhattan introduces us to the series, which centres on three friends, originally from Puffin Island, the setting of Morgan’s previous series and possessed of two of her best recent roms, Playing By the Greek’s Rules and Some Kind of Wonderful. Paige Walker, Frankie Cole, and Eva Jordan work for Star Events, a Manhattan event-planning company … until they don’t. Meany office manager “Cynthia” fires all three. They make their way to the brownstone they share with Paige’s protective, supportive, and lovely brother Matt to drown their unemployed sorrows in wine, chocolate, and ice cream.

Enter Matt Walker and Jake Romano, his best friend, who fret their way through a conversation about how worried they are about Paige, her buds too, but especially Paige. Their rueful, alpha-dude humour is never far, however, and neither ever comes across with any alpha-holeness. They’re good guys, even if they exude that beloved rom-hero mystery of hidden depths and secret hurts that can only be healed by the heroine’s love.

Paige, however, is the romance’s main focus. We have hints of her past and cause of bro and BF’s concern when we get into her head and note her frustration over her family’s over-protectiveness, with phrases such as: “She could live her life without being asked how she was feeling twenty-five times a day” and “She didn’t want to be anyone’s poster girl for brave.” Paige spent her childhood in hospitals, with a “heart defect” requiring sundry surgeries. Her parents worried over her; her brother’s sole mission was to keep her safe and his ally in caring for Paige was none other than sexy Jake Romano. But Paige is grown up and her surgeries have seen her to health and fitness. Nevertheless, Matt and Jake’s protective knee-jerk reactions to anything harmful coming her way haven’t gone away.

Paige and Jake’s relationship has a past both tender and humiliating. This shared past makes Morgan’s romance all the richer. One of Miss B’s favourite scenes is of teen Jake, disguised as a doctor, sneaking into Paige’s hospital room, to cheer her up before a surgery. But there’s also a cringe-worthy one (that has marked Paige’s relationships with men) of Paige telling Jake she loves him and following that with a clothes-shedding awkward seduction-attempt. Morgan puts it beautifully in Paige’s memory of that moment: ” … she was destined to carry around the embarrassing memory like a ball and chain.” Paige recalls Jake’s self-extraction with another great Morgan metaphor: ” … he’d gently disentangled himself from her clinging limbs, as if he’d suddenly found himself covered in laundry blown by the wind.” Ouch.

There be reasons to Jake’s rejection of Paige and they have to do with his woundedness. Abandoned by his mother at six, Jake carries her rejection like a shield against emotional attack. Grown-up, strong Paige, however, is his great weakness, a weakness he hides with a promise to Matt “never to touch his baby sister” and a parade of fluffy beauties he takes to bed. As long as Jake can keep his Paige-desire under wraps, he can continue to care for her: “He kept her annoyed. Kept her irritated. Kept her safe.” Safe from his pernicious, not-able-to-love self. Except any self-respecting romance reader knows these are the hero’s famous last words. He’s a goner: we know it; the heroine knows it … but the hero will have to walk a long and suffering path to realizing how much he loves and needs the heroine.

Before Jake can do that, however, he has to screw up big-time. He has to wound the heroine, mess up his relationship with his best friend and exile himself into the wasteland of lonely. Paige, on the other hand, grows stronger as Jake grows emotionally dumber. Miss Bates loved Morgan’s characterization of the heroine’s strength in the face of the hero’s betrayal: “All wounds would be kept firmly on the inside, held together from bleeding with lashings of willpower and female fortitude.” “Lashings of willpower”! Isn’t it great? Up there with Neels’s “lashings of whipped cream”! Miss Bates would venture to say that Morgan is the new Neels: her vast romance oeuvre can serve the same warmth, love, humour, and a bit of food-porn too.

By this point, reader, you’ve guessed that Miss B. loved every page of Morgan’s Sleepless In Manhattan. It has a great combination of HP-alpha-protectiveness in the hero and a perfect balance of strength and vulnerability in the heroine. Hands down, Morgan writes the best love scenes because they’re love scenes. It’s not about the sex, though they’re not “closed bedroom” or “kisses only”; they’re about the hero and heroine’s emotional engagement, at a visceral level. Their bodies know what they’re feeling before their hearts do. Morgan is also one of the few romance writers who can write an explicit love scene and still retain something of its mystery.

Miss Bates would agree there’s nothing original, new, or “avant-garde” about Sleepless In Manhattan. It is simply a master romance-writer creating a perfect illustration of what the genre can do: make us laugh and cry, entertain us and warm us, renew our faith in love and friendship, in an ending where reconciliation, forgiveness, and hope, as exemplified by the central couple, can make the world a better place. During a week where Miss B. saw her southern neighbours elect a leader who doesn’t forgive, doesn’t forget, and believes love is weakness and lost her most beloved singer-poet, who knew that even a broken hallelujah is love … well, Morgan’s novel healed the wounds. With Miss Austen, Miss Bates says that for Sleepless In Manhattan, “there is no charm equal to tenderness of heart,” Emma.

Sarah Morgan’s Sleepless In Manhattan is published by HQN Books (Harlequin). It was released on May 31st and is available in a variety of formats at your preferred vendor. Miss Bates received an e-ARC from HQN Books, via Netgalley.