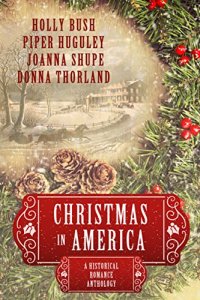 Miss Bates waits for, anticipates, and relishes every volume of Donna Thorland’s “Renegades of the American Revolution” series. She is especially intrigued by Thorland’s cold-blooded, single-mindedly-devoted-to-the-cause American spy, Angela Ferrars. Thorland’s author’s note to “Christmas At Mount Holly” (in the Christmas In America Anthology) offers fascinating information about Ferrers: she is based on a historical character; we don’t know much about her except she was the cause of the hero’s loss of face and Washington’s triumph at an important Revolutionary War battle; she mentors the first book’s heroine in the interest of creating a female figure who is cunning spy, instrumental in America’s victory against the British, and unusually characterized as female mentor to female-neophyte-spy. In this short, moving, and beautifully-written story, Thorland gave Miss Bates what she and other readers long for: Angela Ferrars stripped of craftiness  and uncompromising devotion to the American cause, Angela Ferrars weakened by desire, liking, maybe even, in the end, love. Thorland gave her a worthy hero: strong, ruefully amusing, loving, honest, kind, and most importantly, capable of showing The Widow a glimpse of another life, one of connection in place of conflict, love in place of hate, hope in place of resignation.

Thorland’s story opens in Mount Holly, New Jersey, on December 23rd, 1776. Colonel Carl von Donop arrives with a double purpose, hoping for a Christmas break for his men and planning on withstanding a few thousand Rebels. Posing as a middle-class widow, Angela Ferrars welcomes him to her “home,” offering him and his officer sustenance, warmth, and comfortable beds. Angela also has a double purpose in Mount Holly: foil Donop and ease General George Washington’s way. With subterfuge and guile, the mistress of disguises, fed on “memories that defined her, and drove her,” (*sniff* we poor readers remain ignorant of her tragic back-story), Ferrars weaves a trap for Donop, except “there was nothing more inconvenient that discovering you rather liked a man whom you were about to destroy.”

Donop, on his part, is smitten: “his eyes lighted on her, and nothing else in the room could compete.” Thus begins Thorland’s lovely little dance of a romance. Donop is an honourable man; war may be his element, but it hasn’t stolen his humanity. Angela is a woman who shed her vulnerabilities and replaced, as Lady Macbeth did, her “milk” for “gall”. Unlike the self-serving false queen, Angela is an ideologue. She believes deeply in America’s potential: ” … America. A new land, full of hope and promise. But even the most fecund fields could be fallowed by greed, and proud men reduced to serfdom. She would not let it happen here.” Angela Ferrars may appear hardened, but she knows a “land of hope and promise” must be defended and protected with a soldier’s vigilance. She is that soldier, now in love with an enemy soldier, a man she knows deserves her loyalty, commitment, and love.

Though Thorland’s narrative is a mere snippet, she packs more agonized conflict in it than many lengthier romances. She paints a broad canvas, a sweeping historical one, and yet manages to convey intimacy and a growing “affinity” between two older (hurrah!), wiser protagonists. Miss Bates ached for Angela and Carl, caught in history’s tide, though they seemed to know their place in it and understand its stakes. Ah, but the heart, posits Thorland, and gives her warriors, at least for a while, shelter from history’s storm and their own hope and promise with a sly military metaphor: “She moved to him, into his arms, as though released, missile from catapult, by his words.” Miss Bates found more to highlight, nod over, and think about in this little slip of a story than lengthier ones. She loved every word of it. It is wonderfully written and beautifully imagined.

There are several fine stories in the anthology, by Holly Bush, Piper Huguley, and Joanna Shupe, as well as Thorland’s glorious one. At least for Thorland’s story, Misses Bates and Austen say “there is no charm equal to tenderness of heart,” Emma. Christmas In America: A Historical Romance Anthology was self-published by the authors. It was released on September 27th and is available as an e-book at your preferred vendors. Miss Bates received an e-ARC from the authors.

2 thoughts on “Mini-Review: Donna Thorland’s “Christmas At Mount Holly” in the CHRISTMAS IN AMERICA Anthology”