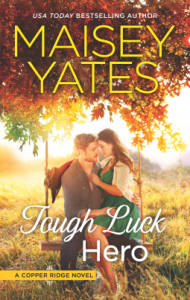 It seems appropriate that Miss Bates open her reviewing year with one of her favourite contemporary romance writers. Maisey Yates’s Tough Luck Hero is part of that sprawling fictional Oregon town that Yates has created around the Garretts and Wests, as well as various inter-connected denizens. Yates’s Copper Ridge tales have yet to grow stale or pale. Some are stronger than others, but each one is a necessary part of Yates’s compellingly woven whole. (Brokedown Cowboy remains Miss Bates’s unwavering favourite.) Copper Ridge is a place of mountainous and sea-set beauty, complicated family dynamics, and the small-town warp and weft of stricture and support. With every book, Copper Ridge grows, as the lonely and disparate find someone special. The road to love, commitment, and many babies, however, is fraught with Yates’s particular vision of what falling in love and committing entail: a crap-load of resistance and torment. Tough Luck Hero‘s hero, town Golden-Boy Colton West, really has had a run of terrible luck. Mayoral candidate Lydia Carpenter is sitting pretty … until Colton and sympathy shots at Ace’s bar see her luck run out too.

When the novel opens, Colton recently discovered his father cheated on his mother. As a result, he has a 30-year-old+ brother (Jack Monaghan, Bad New Cowboy‘s hero). His fiancée leaves him at the altar. To top it all off, he wakes up in Las Vegas, on what was supposed to be his wedding night, married to Natalie’s bridesmaid, Lydia Carpenter, a woman with whom he shares, at best, antagonistic dislike. As for Lydia, Yates’s wit says it all: “Whenever she was around Colton, she wanted to punch him in the face.” Colton’s face says it all about Lydia too: “His entire face felt like it had been pushed into a barrel of bees.” And those are merely a hint of how nasty these two are to each other. Miss Bates loved it!

Lydia has equal enmity and annoyance for Colton. Yet here they are: in a compromising position, in a sordid town, in a kitschy hotel room, MARRIED … and so drunk, they don’t remember getting married, or consummating said marriage. The only evidence of their night of regret and pounding headaches are a torn condom wrapper, and wild and whirling texts, with accompanying pics, of their nuptials, to near-everyone in Copper Ridge. Lydia is beside herself with worry about her mayoral run. This incident, coupled with a quickie divorce, will definitely give the edge to her rival, Richard Bailey, Colton’s absconding bride’s father! Colton, concerned about his mother’s precarious emotional health given the recent revelations of his father’s infidelity, has reason to worry his out-of-character actions may cause Gloria further distress. Lydia and Colton, “her partner in licentiousness,” snarling and bickering all the way back to Copper Ridge, agree to put up a happily-married front to their town, friends, and family.

Miss Bates thought Yates did some interesting trope-ish things in Tough Luck Cowboy. For starters, she took the “opposites-attract” trope and stood it on its head. Colton and Lydia are very much alike, and while their minds says they’re not feeling anything, in upper or nether regions, their bodies and hearts do very different things. They’re both careful planners, responsible, duty-bound, giving all to their family and adopted town, respectively. Evidence for Colton is that “he was not a spur-of-the-moment kind of guy … had never set one foot out of line” And yet, his wild night of drunken married sex with Lydia says something very much to the contrary. Lydia’s response to waking up with naked-Las-Vegas Colton proves their similar personalities further:

” … I really don’t do things like this. I am not spontaneous. I am not irresponsible. I do not … sleep with men I don’t like.”

He snorted. “I don’t usually sleep with women with superiority complexes.”

This pretty much set the hilarious tone of the novel’s first half. But, as Sadie Garrett says to her best friend, “marriage with all of the annoying things like compromise, cohabitation and having to eat what he wants for dinner, without the things that make it fun? … Wow. Good luck with that.” Sadie is right, of course, because Colton and Lydia are good people. They cohabit, compromise, and become friends because they talk and, albeit, reluctantly, share what made them who they are. To their great surprise, through all the verbal “shots,” they end up friends.

Of course, the friend’s devil, licentiousness, leads Colton and Lydia a merry tune to married-friends-with-benefits. Their bodies say everything about their relationship until they wake up one day like a shipwreck’s sole survivors, afloat on a precarious emotional raft:

… she and Colton were two powerless control freaks who were truly at the mercy of the world, and everyone in it … That wedding … was like a loose thread. And they’d tugged on it and the whole damn world had started unravelling around them and now there was just no hiding the fact that they were as ragged as everyone else.

To realign their world requires more trope-twisting goodness from Yates. In a beautiful trope-reversal, Colton plays the role of “trophy husband” and Lydia submits to a magnificent heroine grovel. Miss Bates loved every reading moment of Yates’s romance novel. With her “partner in reading,” Miss Austen, she says that Yates has yet another “mind lively and at ease,” Emma.

Maisey Yates’s Tough Luck Hero is published by HQN. It was released in June of 2016 and is available at your preferred vendors. Miss Bates received an e-ARC from HQN, via Netgalley.