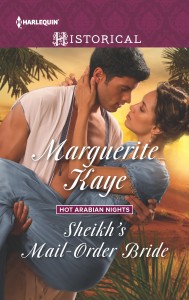 Last year, Miss Bates was introduced to Marguerite Kaye’s work when she read the Comrades In Arms series, The Soldier’s Dark Secret and The Soldier’s Rebel Lover. She loved them and found they brought something new to the tired old Regency romance: truly independent heroines, with will, will power, conviction, and a strong impetus to forge their own destiny and heroes who let them be themselves. In the Hot Arabian Nights series, Kaye brings the same feminist ethos to her heroines and the same consideration to her heroes. In the second book, Sheikh’s Mail-Order Bride, this heroine-centric disposition comes in the form of Lady Constance Montgomery, on her way to India to fulfill her parents’ arranged marriage for her to an English merchant. We learn that “mama” and “papa” sent her to India in exchange for Mr. Edgbaston’s hefty payment to deal with debts incurred by her father’s hare-brained money-making schemes. On the way, however, Constance is shipwrecked on the Kingdom of Murimon’s shores. Murimon’s soon-to-be crowned king, Kadar, is native and would be to the manner born had he not spent the last seven years travelling the world and putting his cultural-know-how and sharp judgement to kings’ and nobles’ disposal. With his brother’s Butrus’s death, Kadar, though he’d vowed never to return because of the “sad thing” that happened to him (ah, cherchez la femme, chère lectrice) must take power to devote himself to his people’s well-being and country’s prosperity.

Kaye’s romance contains a great opening scene. After weeks of generosity and care with Murimonian fishing villagers, Constance is summoned to Kadar’s palace. Constance arrives wild-haired, barefoot, and bedraggled. Kadar is immaculate in pristine white, with a headdress of diamonds. Constance also notices he is reserved and maybe a little sad. Kadar, for his part, finds Constance’s babbling, forthright manner attractive. The revelation of Constance’s gratitude for the shipwreck’s foiling of her unwanted engagement moves Kadar to offer her a position as the king’s astronomer. With everyone at home and in India thinking her dead, Constance enjoys respite and freedom from the marriage “convenient for all but herself” to do what she loves, star-gaze. One of the novel’s aspects Miss Bates enjoyed the most was how Kadar and Constance started out so sad, feeling so constrained by their circumstances and how they learned to navigate the dangerous waters of obligation without losing their hearts’ desire … which, of course, turns out to be each other.

Kaye’s romance is very much about the pull and draw of opposing principles: duty versus desire, familial and social obligation versus autonomy, constraint versus unbridled pleasure. These themes take form in our hero and heroine’s personal stories, while their encounter and that Puck of emotions, love, play havoc with their ability to fulfill the former while reigning in the latter. While their lives before-Kadar and before-Constance weren’t joyous, they were predictable and comprehensible. Constance for one is amazed at how she can yearn for freedom and yet still want to be connected to Kadar:

… it had not occurred to Constance until now that it was possible to feel two quite contrary things at the same time: a profound and deep-rooted affection for a man – no, she would not dare go so far as to call it anything more; and a fierce determination never to be any man’s property.

“You had just lost your brother, you had gained a kingdom you never thought would be yours and you were contemplating the loss of all you had achieved for yourself since you left here,” Constance said, pressing his hand. “You were shipwrecked, just like me.”

A lovely exchange, a testament of Kaye’s elegance with words and characterization: who Constance is, astute, sensitive, how she reads Kadar and herself. Moreover, Kaye’s romance shows how two people centred on obligation, with closed hearts, learn to open themselves to pleasure, affection, and friendship, the joys of conversation, gentle banter, and, in time, physical delight. Constance and Kadar are so responsible, so loving, and gentle, even though life circumstances haven’t done them any favours, it’s easy to be “on their side,” to wish for their happiness.

While Kadar is fixated on the sad thing that happened and his dreams for his country and people, his attraction to and affection for Constance shake his world and self-conception. His obligation, and her declared desire for living outside the stultifying world of marriage, prevent him from being with her. Constance’s awareness of Kadar’s duty to country, people, and a strategic marriage, as well as her desire to live a free life once back in England, prevent her from being with him too. But the restraints hero and heroine impose on themselves are of their own making: their fears, the lack of confidence in their deserving of love, and their respect for each other’s choices and life philosophies, prohibit them from giving sway to their deepest emotional and physical desires. This is an oft romantic conceit; hence, why the genre has the central couple spend carpe diem time together:

“Abandon.” A shiver of delight ran up her spine. “I would very much like to behave with abandon.”

Miss Bates loved that choice of word, “abandon,” the opposite to all the values, laudable as they may be, that Kadar and Constance feel negate their love and desire for a commitment in time and before witnesses, in short, marriage. This is always an interesting twist to the romance narrative (Balogh is particularly good at it) and allows Miss B. to quote one of her favourite poems, Andrew Marvell’s “To His Coy Mistress”: “Let us roll all our strength and all/Our sweetness up into one ball,/ And tear our pleasures with rough strife/Through the iron gates of life:/ Thus, though we cannot make our sun/ Stand still, yet we will make him run.” Romance stands in contradistinction to Marvell’s marvelous poem: the romance couple is subject to time and tide, age and decay, but they also have the promise of the HEA, a long life lived together. Their snatching of time to love and be together is the true deceiver: they can have more, they will have more.

Marguerite Kaye’s Sheikh’s Mail-Order Bride is a most pleasing romance, with its atmospherically dream-like quality and gentle, loving, respectful protagonists. Nevertheless, the HEA-resolution comes upon us too quickly and proves a tad anti-climactic. Despite this minor quibble, Miss Bates would argue that Kaye is one of the best, most sensitive, thoughtful, histrom writers working today. With Miss Austen, she says that Kaye’s Sheikh’s Mail-Order Bride is a fine example of “a mind lively and at ease,” Emma.

Marguerite Kaye’s Sheikh’s Mail-Order Bride is published by Harlequin. It was released in July 2016. Miss Bates received a copy from the author.