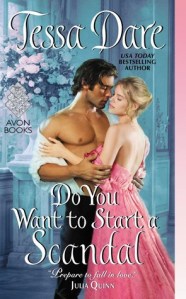 Miss Bates is a Tessa Dare fan. She read the first three Spindle Cove novels and adored them, especially the third, A Week To Be Wicked, with its bespectacled paleontologist-heroine and dissolute rake-hero. Also, it’s a road romance and Miss B. loves a road romance almost as much as she does a closed-cabin one.

Do You Want To Start A Scandal, Spindle Cove #5, doesn’t take place in Spindle Cove, but at the Nottinghamshire estate of Sir Vernon Parkhurst and, as such, is more a closed-estate romance, with a dash of closed-room mystery thrown in.  Heroine Charlotte Highwood and hero Piers Brandon, Marquess of Granville, are Sir Vernon’s guests. When the novel opens, neither is in a good place. Charlotte’s marriage-machinating mum, reminiscent of Austen’s Mrs. Bennett, has landed her in the humiliating position of being a gossip-rag’s ridiculed gull, the Prattler‘s. Charlotte is the source of the eponymous “scandal” and the moniker plagues her throughout. Piers, on the other hand, is everything proper, controlled, and aristocratic. His presence at the Parkhurst estate, however, is not in the convention of the languid gentleman enjoying a few weeks in the country. He’s on official crown business, spying on Sir Vernon, who may be asked, by the government, to take a sensitive overseas position. Piers is there to find out if scandal, tryst, blackmail, or any politically-lethal weakness, may put the crown at risk of humiliation. So, Charlotte, prodded by her mother, is on a husband-finding mission while Piers is on a fact-finding one.

Dare writes in the comic mode, reminiscent of Julia Quinn: country estates, witty banter, farcical scenes, with a modicum of gravitas centred on some sadness in the hero, or heroine. Charlotte and Piers’s meet-cute is a hoot, capturing Miss Bates and ensuring her approval. Charlotte , diminished by controversy, but too ebullient and cheerful to let it get her down, is indulging in sneaky intrigue: “The gentleman in black turned down the corridor, and Charlotte Highwood followed. Stealthily, of course.” She follows Piers into the library to warn him against … well, herself, or rather herself as spurred on by her marriage-scheming mama, or as she wittily references Austen to Piers: ” ‘It’s a truth universally acknowledged that a titled man in possession of a fortune should steer far clear of me.’ ” It is obvious that the austere Piers is drawn to Charlotte’s energy, beauty, and good heart. For the remainder of the novel and to the HEA-epilogue, they continue in this opposites-attract vein, her free spirit to his stiff-upper-lip. And it is funny and endearing.

In that same scene, Dare offers us a farce extraordinaire as Piers and Charlotte are trapped, hiding in the close quarters of a curtained window-sill, as two lovers, or as Piers quips, “tuppers,” indulge in amorous play on the desk. When the lovers-tuppers scurry out and the Parkhursts’ hilarious eight-year-old son, Edmund, outs Piers and Charlotte, to save Charlotte’s already precarious reputation as the Prattler‘s “Desperate Debutante,” Piers offers marriage. Her mama is over the moon.

Dare introduces the novel’s main conceit: Charlotte’s desire to wed for love contrasted to Piers’s practicality and eschewing of all things “heart”. How Charlotte opens Piers’s heart with her affection, friendship, and humour is lovely. Her initial failed attempts are such fun:

He was worldly and educated and probably spoke a dozen languages. Charlotte didn’t have many accomplishments, as society counted them – but she did have her good qualities. She was a good-natured, forthright person, and she could laugh at herself. In conversation, she generally put other people at ease. Those talents, modest as they were, failed her now. Between his poise and that piercing blue stare, talking to the Marquess of Granville was rather like conversing with an ice sculpture. She couldn’t seem to warm him up.

Piers, on his part, while doing the honourable thing, always treating Charlotte with care, concern, and kindness, nevertheless, dismisses his own heart with: “Once he had her wedded and bedded and tucked away in the country, he could get a firm grip on himself.” Well, Miss Bates loved how Dare made those Piers’s famous last words. Because Piers does everything but “get a grip on himself,” his heart and other bits of him run rampant with desire, emotion, and vulnerability and always land in Charlotte’s emotionally savvy hands and heart. Miss Bates loved how Charlotte yearned to be useful and accomplished (there’s a mystery to solve that sees Charlotte’s people-reading skills put to great use), but, in the end, realizes that her ability to make connections and bring out the best in others is as important as any talent.

Whatever the seemingly dark and dire goings-on on the Parkhurst estate, Dare always moves her narrative towards benign resolutions. In a sense, the novel’s darkest place is in Piers’s own sense of unworthiness as the recipient of Charlotte’s love. It is, in turn, the novel’s weakness, in that it’s now the romance convention to make the hero, or heroine’s trauma always centred in childhood and parental failure/weakness. Nevertheless, this narrative thread is also the novel’s most redeeming because of the light it sheds on Charlotte’s greatest “talent,” her ability to love and show Piers how capable he is of love and deserving of it in return. Piers’s realization culminates in a wonderful vindication of Charlotte’s talent and an act, on Piers’s part, of how he returns her pride. Dare gives Piers the last word on why and how the HEA must always be a marriage of the heroine and hero’s best qualities in a new vision of harmony and love: “She must always remain the optimist to his cynic, the laughter to his silence, the chaos to his order, the warmth to his cool. Their hearts would meet in the middle somehow.”

With the Austen that Dare looks to and honours with every romance, Miss Bates says that Do You Want To Start A Scandal is indicative of “a mind lively and at ease,” Emma.

Tessa Dare’s Do You Want To Start A Scandal is published by Avon Books (HarperCollins). It was released in September 2016 and is available at your preferred vendors. Miss Bates received an e-galley from Avon, via Edelweiss.

17 thoughts on “REVIEW: Tessa Dare’s DO YOU WANT TO START A SCANDAL”