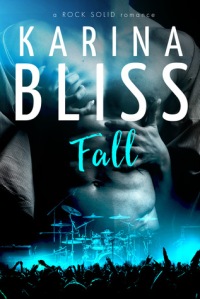 Miss Bates was uncertain about Karina Bliss’s “rock star” series, being more madrigal-girl than black-kohl-rimmed-eyes rocker-chick. Nevertheless, given that Bliss’s A Prior Engagement is one of MissB’s favourite category romances, she was willing to take on the raucous. Instead, she found a moving, funny romance, believable characterization, and engaging, trope-twisting genre-bending. At first, Fall is harmless enough. Picking up from the riff Bliss set up in Rise, she moves the action from rocker-millionaire-bad-boy Zander Freedman to his PA, Dimity Graham, and drummer, Seth Curran. The band’s fortunes and future are awry and Dimity is in full powerhouse damage-control mode. Zander’s reputation in tatters and recent throat surgery has put the band at risk of ever “rising” again. Dimity finds herself at the local watering-hole near Zander’s LA mansion with Seth, still mourning the loss of his high school sweetheart to another man, the news of Mel’s engagement putting the heart-broken icing on the proverbial non-wedding-cake for him. They drink too much, Seth cries on Dimity’s shoulder, and – yada yada yada – they do the beast with two backs. Dimity offers to play pretend-girlfriend when they return to New Zealand to help Seth get Mel back (while Dimity also machinates to save Zander’s career and the band).

There are three reasons why you should read Bliss’s Fall: one is the alpha-male-hero reversal; the second is consistently good writing; and thirdly, the trope-twisting of the romance narrative’s key betrayal moment. Miss Bates found the first the most interesting and worthy to put Bliss’s Fall a cut above any run-of-the-mill, “entertaining” romance. Bliss plays hooky with the romance shibboleth, the HP, with its powerful, wealthy, and emotionally stunted alpha-hero. Miss Bates found herself reading Fall with a double-narrative running in her head: here’s Fall, here’s the riff on the HP. And, with Fall a “rock’n’roll world”-set romance, the metaphor seems apropos.

The beta-hero Seth is familiar, though there are deliberate, clever plays on his personality. We are introduced to him by the badass heroine herself as she assesses the members of Zander’s band: “Seth was the poster child for a nice guy. He was Tom Sawyer grown-up – friendly, mischievous, playful, a lovable scamp with muscle.” It is obvious that Dimity has watched Seth over the years and knows him well: “Everyone liked Seth. He could transition from playing pool with roadies to discussing economics with financiers – he even loved kids. Dimity had even seen him kiss a dog once.” Seth is the perennial “nice guy”, who owns his HP-echoed “feminine” qualities: he loves the smell of babies (great scenes with baby-scared Dimity, Seth, and his adorable months-old niece, Emily), he prefers to have sex with someone he loves,” and he plays buffer among the more temperamental band members, as well as his nurturing, traditional mother, workaholic father, sister, brother-in-law (though they’re all united in Emily-worship). He’s a peace-maker, good friend, loyal boyfriend (until Mel dumped him for another man). He’s even-tempered, friendly, accommodating, and patient; like the best heroine-teacher-characters in category romance, he could easily take on and win over the toughest grade two class in the universe.

Bliss’s sheer cleverness comes in when Seth’s characterization is played against Dimity’s. Dimity has HP-alpha-hero qualities. For one, and this delighted Miss B., she recognizes Seth’s “innocence” and potential vulnerability to the world’s nasty and sees herself as his shield: “Some people needed protecting and Seth was one of those – a kind, decent guy who wore his heart on his sleeve.” One of Miss Bates’s favourite moments was Bliss’s sly allusion to the beta hero in Dimity’s assessment of Seth’s love moves:

“I’m sure you’re an awesome lover. Tender. Considerate … ” She struggled to think of all the positives associated with a beta male. “And probably awesome at kissing and cuddling afterward.” The outrage on his face. She got the giggles.

There’s a priceless love scene in Fall, standard fare as far as the goings-on, but Dimity treats it as insignificant, just an scratching-an-itch happening, no cuddles, no tenderness. Like the HP-hero, we can see this is exactly what she needs and exactly what she avoids because of the spotlight Seth will shine on her vulnerabilities. As the romance reader can tell, Bliss is setting up her heroine to bear the emotional comeuppance at the HP’s heart. The beta hero, in the face of the alpha-heroine, is going to reduce her to a quivering emotional mess of love, rainbows, pink ribbons, and puppies. Everything she hates.

What Dimity’s alpha-cluelessness doesn’t realize is that the beta’s power lies in his ability to observe and know others and give them what they need, not what they want. Just as we get to know Seth from Dimity’s observations, Seth tells us everything we need to know about Dimity, starting with, “She could wither the toughest guys’ balls with one cold stare.” Dimity is hard exterior hiding woundedness and vulnerability. Seth sees through that: “He’d always thought Dimity kind. Never by word – the woman was a verbal wrecking ball – but by deed she was one of the kindest people he knew … ” Seth has Dimity’s emotional number and when she catches wind of it, well, she’ll do everything she can to resist his heart’s call: “She wasn’t comfortable with warmth, didn’t know what to do with it, so she deflected.” She will fight her heart’s desire: “… she watched him sleeping, trying to work out why he was having this effect on her, but there was nothing in his face to solve the puzzle, only the unwelcome tenderness in her own heart.”

When Dimity realizes that she may be *gasp* susceptible to love, she runs and hides. Like the best alpha-hero, she immerses herself in work (in this case, of putting Rage back together, not acknowledging its demise, or Zander’s wishes, another interesting, among the many, secondary conflicts): “She was a fighter, not a lover, with all the corresponding lack of social skills that implied in her private life. These strange longings for intimacy would pass. She just needed to be busy again, crazy busy. Working.” The corresponding alpha-male to Dimity is brilliantly rendered in Seth’s workaholic father. Another of Miss B’s favourite moments comes when Frank Curran and Dimity try to show each other up by comparing work hours:

Dimity examined her nails. “Longer hours than nine to five.”

Frank bristled. “I’ve only recently pulled back my hours. I used to average sixty.”

“I pull up to seventy during a tour.”

“I once worked eighty.”

The alpha-work-posturing is a hoot, but it also tells us  about what happens to the characters’ ability to “make connections” with their loved ones. Because love they do. Deeply and well, as only hard-working, devoted, introverted alpha-types can. Miss Bates thought the moment Dimity admits this pretty great: “She’d thought that by building an identity through her career and not personal relationships, she’d be safe.” Safe from what? From being abandoned? From risking her heart? But, as Seth tells us in the end, with a great little ironic twist: “He loved her because … someone had to be man enough for the job.” [Emphases Miss Bates’s.]

On a final note, Miss Bates can’t discuss the ending too much for fear of spoilers. She will say this, however, to add to Bliss’s clever topsy-turvy beta-hero-alpha-heroine characterization is a romance betrayal that doesn’t involve the hero. And that’s all she’ll say. In Karina Bliss’s Fall, Misses Bates and Austen say you’ll find “no charm equal to tenderness of heart,” Emma.

Karina Bliss’s Fall is self-published and the second book in the “Rock Solid” series. It was released in October of 2016 and may be found at your preferred vendors. Miss Bates is grateful to the author for a copy.