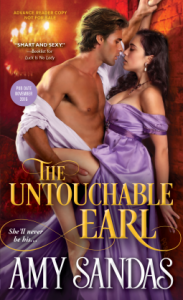 It’s rare that Miss B. reacts to a romance (maybe because her choices tend to the tried and true these days) as she did to Amy Sandas’s The Untouchable Earl. About half way through, she wanted to DNF. But there was a sense of purpose and theme to it that said, “No, no, keep reading.” So, she did. And now that it’s done, she doesn’t quite know what to say about it. At its heart is a sexual healing theme that Miss B. despises, akin to her curled-lip reaction to Lisa Valdez’s Passion, possibly rivaling Old Skool romance to be the worst romance novel ever written. And yet, she also can’t dismiss The Untouchable Earl the way she can Passion. Its premise is the stuff of high eye-rolling melodrama. Melodramatic circumstances conspire to bring Plain-Jane husband-seeking ton debutante Lily Chadwick, kidnapped and drugged, up for auction at Madame Pendragon’s, a brothel. It’s all pretty sordid and awful until the eponymous Earl, a hero with possibly the most ridiculous name in romance, Avenell Harte (with, yes, the obvious pun there) purchases Lily and her intact maidenhead. As far as maidenheads go, hers isn’t half as impressive as Passion’s, but still. It doesn’t look like her maidenhead’s in any danger when we find out that Avenell (she’s strictly forbidden from saying his name and when you consider how lame it is, you can understand the guy’s reluctance) … well, he’s functional and all, but he can’t bear to be touched.

When Lily reaches for his manly forearms and such, he’s flinchy and hurt. It’s painful for him, in a way that sounds like a fibromyalgia … or not. Because he only has the skin? nerve? pain and no other symptoms. He’s muscle-bound and huge and can slam villainous pursuers of Lily’s virtue against the wall, shake them like Cyclops shaking a kitten. Ah, but our Lily: she is pure, compassionate, and good and, to extend Sandas credit, she has read books, erotic ones, and knows she wants Avenell as her lover. So, they become lovers – of a sort. Avenell accepts Lily’s offer because she’s got soul-ful grey eyes and he loses himself in them. He wants her, but knows he doesn’t deserve her, because he can’t offer her a full life. He’s damaged – and humourless. As is Lily.

Lily and Avenell embark on a “relationship.” He buys her gifts, opens an account in her name (because she be poor and thus why she and her two sisters, though independent and original, must find husbands among the ton), and awaits her, broodingly, in his carriage every night. They ride to Madame Pendragon’s because meeting in Avenell’s big-assed mansion will not do: it means too much to have the “amazing woman” Lily there, he’ll become too dependent on her gentle, loving, compassionate presence. They fool around – a lot – and it was all too much for Miss B. – with Avenell being commanding, dark, agonized, and morose. Lily takes up the mantle of her pleasure so to speak and they go on like this for oh MissB’d say about 75% of the book. Until Avenell must send Lily away because he wants her to have a normal life with a normal man to ensure they have normal children – even though the ton knows of their trysts and, all things considered, because her magic touch allows him to do the wild thing and she might be pregnant – except that doesn’t occur to these two dunderheads.

We never really find out what happened to poor suffering Avenell, maybe the after-effect of a childhood illness, maybe parental rejection as a result of being a pain-wuss. Miss Bates reached the end of the novel hoping Sandas had one of those cute afterwards where she explains where she got the idea for Avenell’s affliction. Ne’er to be found, dear readers. What can be found is a neatly-tied up HEA that rings false and major sentimental emoting on Lily and Avenell’s part. With Miss Austen, Miss Bates would say that the Untouchable Earl “had a high claim to forbearance,” Emma. 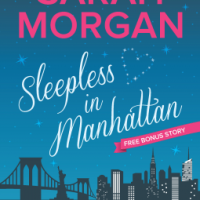