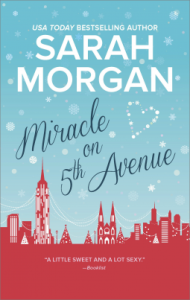 Contemporary romance is a big and diverse animal. Its “infinite variety” inhabits a breadth of verisimilitude, from HP fantasy to the realistic, at times gritty, MC urban wasteland, which, MissB argues, meet and mate in the fantasy realm when the straight-line continuum is arced to a circle. All this to say that along realism’s continuum, where tropes work at one point, may fail on another. Sarah Morgan’s third “From Manhattan With Love” romance, Miracle On 5th Avenue, is an example in comparson to her HP, Playing By the Greek’s Rules (possibly MissB’s favourite HP were it not for that pesky Lynne Graham writing annoyingly good HPs, like The Greek’s Chosen Wife.) The Greek’s Rules contains a naïvely endearing, full-force of positivity heroine and brooding, cynical alpha hero, as does Miracle. What works in one doesn’t in t’other, or maybe imitation isn’t the highest form of flattery when an author imitates herself?

A month before Christmas, Eva Jordan makes her way during a Manhattanite snowstorm to Lucas Blade’s empty apartment. As one-third owner of concierge company Urban Genie, Lucas’s grandmother tasked her with preparing Lucas’s apartment for Christmas and cooking him a slew of meals. Lucas is holed up in a Vermont cabin working on his next horror, hopefully best-selling, novel. Except he isn’t. And because he isn’t, we have a great opening scene: with Eva blithely entering his apartment, laden with grocery bags, and being wrestled to the floor as an intruder … then, NYPD’s finest show up! The scene is funny and beautifully executed.

Once things are cleared up, Lucas and Eva’s subsequent exchanges show them to be, as with The Greek’s Rules‘ protagonists, opposites-attract, with the “attract” denied, scorned, and derided – at least initially. The troublesome NYC snow storm keeps Lucas and Eva bantering and sparring: her sunshine to his cloud ever in conversational conflict. Serious underpinnings populate their exchanges as well: Lucas is in mourning over the loss of his wife, a relationship that was fraught, difficult, and left him rejecting future commitments and denying love’s power; Eva, on the other hand, despite her sunny disposition, is in mourning, still after a year, for her sole parental figure, her beloved grand-mother. The scene is set for Eva to coddle, feed, and care for Lucas, while Lucas growls, rejects her herbal teas but scarfs down her soufflés, not an easy feat when you’re snarling. Eva indulges in every Hallmark sentiment you’ve ever read on a card featuring a smiling sun and flowers and Lucas makes a point of making Nine Inch Nails look like Pollyanna.

What Miss Bates loved in Greek’s Rules grated in Miracle. The reader’s HP fantasy expectations, wherein betrayal of verisimilitude is forgiven for the pay-off of emotional satisfaction, cannot carry over into the longer, truer-to-verisimilitude contemporary romance. Nevertheless, Miss Bates adores Morgan’s work and will forego further comment on this one blip to look forward to reading her again and again. In Miracle‘s case however, in company with Miss Austen, she says “almost pretty,” Northanger Abbey.

Sarah Morgan’s Miracle On 5th Avenue is published by HQN. It was released in November 2016 and is available at your preferred vendors. Miss Bates received an e-ARC from HQN, via Netgalley.