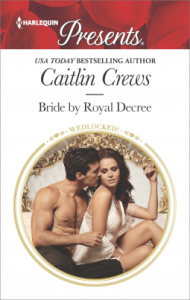 Miss Bates hasn’t read a Crews HP in a while. There can be something overwrought about Crews’s work, but all was toned down, as toned down as an HP can be, in Bride By Royal Decree. Crews’s romance roots are deeply embedded, maybe deliberately so, in fairy tale. Miss Bates enjoyed it all the more for that reason. Let’s face it: realism, nay plausibility, is not the HP’s companion. We read it as fairy-tale-wish-fulfillment-fantasy and Bride By Royal Decree has this in spades.

Decree‘s premise lies in one of Miss Bates’s favourite fairy-tale elements: the revelation of the heroine’s identity and mysterious past. In Deanville, Connecticut, Maggie Strafford scrubs the floor of her barista-job café when Reza Argos, His Royal Majesty, King and Supreme Ruler of Constantines, walks in with the revelation that Maggy is his long-thought-to-be-dead-and-lost fiancée, Princess Magdalena of Santa Domini. At eight, Maggy had “been found by the side of the road as a feral child with no memory of where she’d come from.” Since then, her “unfortunate childhood in foster care” and subsequent adult poverty made her the snarly, mouthy woman she is. Reza is controlled, proper, and duty-bound, “not a sentimental man” writes Crews. He reveals Maggie’s identity and, despite her lippy disbelief, whisks her away to a private island for princess-grooming where the novel’s main action takes place, soon thereafter to be put in her queenly place in his kingdom. Like many an HP-hero, Reza is a “beast,” not in appearance, but emotionally. He’s coiled inward, with a backstory that makes him balk at emotional entanglement.

Crews’s narrative, like any HP worth its salt, is plot-lite once the fairy-tale premise is established. Crews beautifully navigates how Maggy becomes the woman she was always meant to be, strong, loving, and kind, while Reza breaks down from the feelings Maggy elicits. Before we read of Reza’s emotional unravelling, we’re treated to clever banter. With Reza’s entry into the café, Crews does something interesting: she uses Reza as the fantasy world’s emissary, as it encroaches on Maggy’s reality, which is, in turn, ours:

“Tell me,” he said in that same commanding voice that seemed to resonate deep inside of her. “Do you have a small birthmark behind your left ear? Shaped like a lopsided heart?” Maggy felt cold. As frigid as the winter air that had rushed inside when they’d arrived.

“No,” she said. Though she did. And it took every bit of self-possession she had not to reach up and run her fingers over it. He only studied her, his austere mouth flat.

“And you’re creeping me out,” she retorted.

While there’s a clever reference to Pygmalion later, Crews’s Reza is more fairy godmother wrapped in alpha-hero. It’s a perfect moment, from our contemporary barista McJob to princess, thanks to birth; and queen, thanks to alpha-hero. And the fantasy walks in, as potent and powerful as a wand-wielding roly-poly godmother. Reza may sport contemporary wealth’s accoutrements, Apple watch and massive HD-screen mobile phone, to prove Maggy’s rightful birth, but his presence is the reader’s entry into the HP fantasy. If the heroine buys it, despite her doubtful reply, then we do too. In Decree‘s case, Miss Bates was hooked.

Once we, and Maggy, enter the fantasy, the heroine’s transformation, using the tools of commercial trade, clothes, make-up, spa buffing (marvelously referred to by Reza as “time … to tend to your air of exhausted desperation”), and comportment lessons, the romance narrative arrives at the matter’s crux: the cold hero’s emotional transformation. Reza’s backstory isn’t half as interesting as Maggy’s and in this may lie one of Crews’s weaknesses. It’s bad-parents standard fare: cold-hearted mother and cheating father who could never bring his heart to align with his duties, until it destroyed him and nearly his kingdom. With these bitter lessons, Reza vowed to be everything his father wasn’t, especially at the behest of his duty-bound, heart-of-ice mother. He naïvely declares early in his acquaintanceship with Maggy: “distant admiration was the only feeling he intended to have for his queen, as was appropriate. Unlike his father’s disastrous affair of the heart.” At this, of course, every romance reader sniggers and awaits the hero’s emotional comeuppance.

It begins early, with the heroine’s cavalier handling of the hero’s importance. Again, Maggy tries to insert her and our reality into her exchanges with Reza:

“Someone must have put you up to this. Is this some new reality show? The Cinderella Games?”

“Allow me to assure you that I have not, nor will I ever, participate in a show of any kind.” He managed to bite out his words as if they offended him. As if the very taste of them in his mouth was an assault. Then he adjusted the cuffs of his coat in short jerks of indignant punctuation. “I am a king, not a circus animal.” Maggy found that despite having never seen a king in all her life, and having entertained about as many thoughts about the behaviour of monarchs as she did about that of unicorns and/or dragons, she had no trouble believing this man of stone and consequence was one. [Emphasis Miss Bates’s.]

Firstly, Miss Bates has to indulge in a squee!!! about the marvelous wording of “man of stone and consequence” and cuffs of “indignant punctuation.” The hero’s nature, hard as stone, impervious to feeling, is the heroine-warrior’s battleground: to enter the breach and reveal the hero’s blocked emotional identity as a man of feeling, beyond his false emotional identity of “stone” and social and economic identity of “consequence”.

The hero’s softening occurs in the regions of the heart, regions he hasn’t entered in years and doesn’t initially recognize: “What he didn’t recognize – and did not care for one bit – was this uncontrolled, dark thing he couldn’t identify as it swelled in him. It was as if with her, he truly was nothing but a man.” Gasp. “Nothing but a man.” Not a king, not power and authority incarnate, but a forked, vulnerable creature, an elemental being stripped of birth and breeding. Therein lies the heroine’s power, in extracting, like a rare elixir, the hero’s ability to feel.

How does the hero’s emotional transformation come about? Miss Bates would say its a combination of the heroine’s chutzpah-bravery-chin in the face of power, privilege, authority, and desire. There are only two things the HP hero cannot control: the heroine and his exclusive desire for her (bound up with the rom-fantasy element of eternal, assured fidelity). The heroine and the hero’s desire for her are the portals through which the hero is free to love. Maggy is a wonderfully earthy heroine and Crews has her scoffing at Reza’s compartmentalizing of desire, as channell-able and control-able:

“But heirs are not made out of civility and respect. That sounds more like a handshake, which, unless it’s different for kings, won’t quite get the job done.”

“This is who I am.” His voice was even more ragged, his gray eyes were more storm than rain, and Maggy stared. That was temper on his face, she was sure of it. Dark and furious. And with something else beneath that she understood instinctively, though she couldn’t name it. She felt it inside her, like a new heat. “There is absolutely no place in my life for this kind of distraction.”

“By this kind of distraction, do you mean a wife? Or a queen?” She studied him. “Or are you talking about a kiss?”

And then she watched him change, right there before her. She watched him beat back the storm and close himself off, one breath to the next. It was as if he rolled himself up tight into an armored ball. She watched his expression clear, then go cold. His gaze lightened, his mouth firmed. He stood straighter, somehow, and that intense, ruthless power from inside him filled the whole of the ballroom … But Maggy had kissed the man. She wanted him back. She wanted the storm. She wanted to dance in it.

… “You seem so … ” She waved a hand at him, not quite as dismissive as his, but certainly a contender. “Upset. I thought maybe there was some royal proclamation forbidding the kingly lips from touching another’s.”

What we have here, Miss Bates argues, is the romance battle-scene, as fraught and difficult to enact as any war novel. Note the heroine’s hand, dismissing the hero’s imperious one. The heroine enters the fray, armed with her wits and the power her being wields over the hero. They thrust and parry, upper hands are gained and lost. The hero attempts to re-establish his false identity as king, which serves only to protect his heart. But the battle is already lost, as we know, dear reader, because of the heroine’s unique kiss. Princesses made be made, or kissed awake, but the story of the prince’s emotional resurrection is told in the genre’s hurly-burly, the “battle lost and won.”

In Crews’s Bride By Royal Decree, the romance’s dark moment must, given the hero’s resistance and weapons, follow the singular and thematically perfect love scene. Why? Because in making love with the heroine, the hero’s emotional vulnerability is exposed in way that is near-unbearable, so he must strike back with the best hurt possible. Maggy, strengthened by years of loneliness and privation, remade in her rightful image, throws down one of the best narrative gauntlets Miss Bates has read.

You have rightly gathered by this point, dear reader, that Miss Bates loved Crews’s HP-romance. With her reading intimate, Miss Austen, she deems Bride By Royal Decree “there is no charm equal to tenderness of heart,” Emma.

Caitlin Crews’s Bride By Royal Decree is published by Harlequin Books. It was released in January 2017 and may be procured at your preferred vendors. Miss Bates received an e-ARC from Harlequin, via Netgalley.