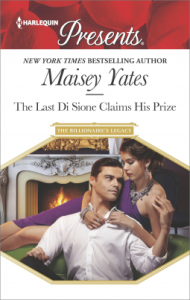 Maisey Yates’s The Last Di Sione Claims His Prize concludes the multi-author Di Sione family series. Apropos of being the last volume, it tells the story of Giovanni Di Sione’s eldest grandson, Alessandro “Alex”. It completes Giovanni’s journey to rediscover a lost love, while fulfilling his secret wish to guide each grandchild to love and commitment. Of the volumes Miss Bates has read, the series’ unifying premise never faltered in meaningfulness. Giovanni’s benign machinations and his grandchildren’s adventures to love and the fulfillment of their grandfather’s request were compelling. This is as true of His Prize as any of the others, though Hewitt’s A Di Sione For the Greek’s Pleasure remains the best of the lot. Nevertheless, reading a Maisey Yates romance is never a loss for Miss Bates. Yates is consistently one of the genre’s finest practitioners, whether writing fantasy-driven HP, or closer-to-reality contemporary.

True to premise, Giovanni asks Alex to travel to Aceena in a “search-and-rescue/retrieve” operation to reunite him with a painting entitled “The Lost Love.” The painting, like the other lost and then recovered objects of Giovanni’s youth, is connected to a woman he left behind when he came to America to make his fortune. The portrait is in the possession of the disgraced, exiled royal family D’Oro. Though jaded and surly, Alex agrees to his grand-father’s request, aware of what he owes Giovanni – his upbringing, success, and most importantly, his rearing with love and care when Alex’s wastrel parents died in a car crash.

Alex travels to Queen Lucia and her grand-daughter, Princess Gabriella D’Oro’s home. Gabriella proves bookishly bespectacled and deceptively attractive once Alex looks past the bare feet, voluminous sweatshirt, and prickly manner. Alex and Gabriella are classic opposites-attract: his urbanity to her naïveté; his sexual experience to her lack; his eschewing of books and art to her love of them; his 36 years to her 23; his good looks to her plain-ness. These initial contrasts are highlighted by one of Yates’s greatest romance-writing strengths, banter. Alex and Gabriella are sarcastic with each other and it’s fun to read their exchanges. When Alex approaches Gabriella about purchasing the painting, she sends him packing. But he’s not dissuaded:

“Well, I see you were making use of my offer to tour the gardens.” He straightened his tie, the action drawing her eyes to his hands. They were very large. Naturally, as he was quite a large man. So really, they were nothing quite so spectacular. They were proportional. Useful. In possession of the typical number of fingers.

“Excellent. I wouldn’t trust me either.”

Yates has the talent to do a lot with a few phrases. She captures her protagonists’ sharp exchanges and makes Gabriella’s attraction to Alex a thing denied, but funny, as the “fingers” commentary attests. Alex and Gabriella give as good as they get and Miss Bates liked that the romance was between intellectual equals. In the end, Alex’s promise to Giovanni and Gabriella’s love of history and art see them set off to discover the painting’s whereabouts.

Alex and Gabriella’s initial encounters are the novel’s best bits. Though she rejects everything Alex stands for: the money, the sundry women, the contempt for quiet and artistic aesthetic, Gabriella is charmed by Alex’s humour and wit, though she maintains “She was not going to allow him to amuse her.” Alex, in turn, sees Gabriella and the life of books and art she embraces as he would chancing upon an alien species: ” … one royal in particular who looked more like a small, indignant owl than she did a princess” and “She was fascinating much in the way a small creature might be.” Alex and Gabriella continue in this amusing vein for a while and Miss Bates most enjoyed it.

The novel’s second half introduces sombre notes and they’re not half as much fun for being predictable and conventional. Alex notices how beautiful Gabriella is, though initially plain, and it’s not half as much fun as her looking like an “owl”, with its echoes of Lightning That Lingers. Gabriella and Alex confess to having promiscuous, careless, reckless parents. Many women are dismissed and/or derided for not having Gabriella’s beauty or purity. Gabriella, on the other hand, suffers the agony of not being beautiful: “A man like Alessandro would never want a woman like her. With her large glasses … he would never look twice at her.” Gabriella is riddled with self-doubt and Alex is riddled with unworthiness. How can a jaded, sullied, bad man ever have anything to offer a smart, pure young woman like Gabriella? How can his dark soul and compromised self ever touch her? They both fall into what Miss B. calls the improbable romance territory of idiots, though they start out so clever and fun. Though Alex’s attraction to Gabriella is, ahem, obvious, her smart self dismisses it as a fluke, an aberration in Alex’s “rampant masculinity” (okay, that bit is funny). Alex, in turn, though Gabriella tells him she loves him, stays away “for her own good”. Don’t know of you, dear reader, but these are some of Miss B’s most disliked conventions.

In the end, despite the promising first half, Claims His Prize tips into over-the-top-ness. Alex rails too much about his sins; Gabriella becomes a dum-dum about her looks. The painting’s discovery and revelation of Giovanni’s past were well done and Miss Bates liked the way the series’ premise was resolved. A Yates romance with signature strengths and weaknesses, but MissB isn’t ready to abandon Yates’s romances any time soon. With Miss Austen, reading muse, Miss Bates says of Yates’s The Last Di Sione Claims His Prize, “almost pretty,” Northanger Abbey.

Maisey Yates’s The Last Di Sione Claims His Prize is published by Harlequin Books. It was released in January 2017 and is available at your preferred vendors. Miss Bates received an e-ARC from Harlequin, via Netgalley.