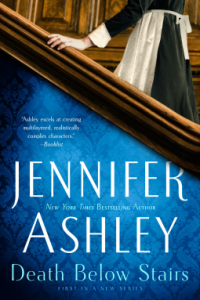 I’m a fan of the kind of book Ashley’s written: historical setting, central mystery, a romance to follow from book to book. I LOVES’EM! My favourites are C. S. Harris’s Sebastien St. Cyr historical mysteries and Deanna Raybourn’s Veronica Speedwell. 2018 is turning out to be a global crapfest in so many ways, but it’s good for having two additions to these series to look forward to. Add the time travel historical-mystery-romance of a Susanna Kearsley and life doesn’t get better. So, you’d rightly say, dear reader, where does Ashley’s fall in your category of reading bliss? Argh, must I add another series to the ones I already follow? It appears I must. Ashley’s premise captured me (and not only because I was a sucker for Downton Abbey). Her cast of characters stays pretty much below stairs, except for one compelling example and a hero who seems to be a class-chameleon.

In 1881 London, Mrs. Kat Holloway arrives at her new position as cook in Lord Rankin’s household, which includes wife Lady Emily, and sister-in-law Lady Cynthia. Kat acquaints herself with the downstairs staff: butler Davis; housekeeper, Mrs. Bowen; and recruits kitchen-maid Sinead as cook’s assistant. Before she knows it, handyman Daniel McAdam shows up too, as a house-staff member. It is immediately obvious that Kat and Daniel have a history, a flirty, attracted manner to him and a “get away, you pest, come hither, big-boy” to hers. Mrs. H, as Daniel calls her, is a woman very much aware of her place and her actions’ propriety. When Sinead is found with her head smashed in in the larder the second day of Kat’s employment however, we see another side to Kat, one who seeks justice for the lowest of Victorian society. She and Daniel, no handyman him, but a chameleon who shows up, dressed as a gentleman, in Lord Rankin’s sitting room as often as he turns up in muddy boots and workman’s cap to snatch a muffin from Kat’s kitchen. The novel unfolds in an interweaving triple-threaded narrative: Daniel and Kat in pursuit of Sinead’s killer, leading them to intrigues, spies, danger to Queen and country; an unfolding of Kat’s backstory, which includes her flirtatiously delightful, warm-with-affection relationship with Daniel; and, the progress, in the midst of killers, fraudsters, and an exciting train journey in pursuit thereof, of Daniel and Kate’s relationship.

Ashley handles her narrative with dexterity, though I would say the novel’s first third tested my patience. It was plagued with constant hints about Kat’s backstory, one typical of class, age, etc.. With every glaring hint, I could see what was coming and the revelations weren’t terribly revelatory. Daniel, on the other hand, while it’s obvious he’s in law enforcement, or secret service, makes for a more compelling character introduction. I’m really looking forward to learning more about him in the books, hopefully, to come. Despite my quibbles, I loved Kat and Daniel’s commitment to truth, justice, and their protective sense. I loved their exchanges and occasional kisses. I also loved the wonderful characters they amassed in pursuit of Sinead’s killer, especially the mathematical genius Mr. Thanos, cross-dressing Lady Cynthia, and Daniel’s teen-age son, James. Woven into all this goodness is another element that would see me return to the series, despite its minor weaknesses: the food and cooking details, as narrated by Kat, are marvelous. I hope we see more of them in future volumes.

All in all, *sigh*, another series to add to my reading queue. Kat, Daniel, and the crew below and above stairs are likeable and the action scenes compelling (the resolution had a moment of cringe-worthy melodrama, sadly). If you’re a fan of this type of multi-element read, with a strong romance being one of them, this is a series for you, dear reader. With Miss Austen, Jennifer Ashley’s Death Below Stairs, is indicative of “a mind lively and at ease,” Emma.