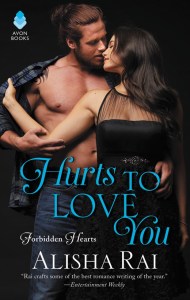 My reading trajectory through Alisha Rai’s Hurts To Love You, third in her Forbidden Hearts series, went from gleeful enthusiasm to tempered affection. The novel tidies and resolves the story (I assume because I haven’t read the first two in the series) of the complicated, convoluted relationships between the Kane and Chandler families. Complications and convolutions that must’ve been illuminated, to an extent, in Hate To Want You and Wrong To Need You. Reading Hurts To Love You felt like I was late to game, like walking into a dinner-party when the crux of the conversation is already underway. After a while I gave up trying to keep up with the sundry relationships and backstories and just enjoyed the romance between outsider Gabe Hunter and Baby Chandler rich-girl, Evangeline, or “Eve”. Gabe and Eve’s romance opens with a lot of mutual lusting from afar, which is a lot of fun. But, to start, to the premise. While Eve might be a wealthy Chandler, Gabe is the adopted son of the Kane family housekeeper. The Kane-Chandler family “feud” started when Maria Chandler and Robert Kane were killed in a car accident years ago, with the mystery of why they were in the car together in the first place resolved by the end of this third-in-series book.

Maria’s husband and Eve’s father, Brendan, took this tragedy as an opportunity to wrest a shared company away from the Kanes, leaving them, if not poverty-stricken, then definitely in straitened circumstances. For the purposes of Hurts To Love You, Gabe and Eve’s romance unfolds at a pre-wedding retreat and wedding proper, specifically the wedding between Livvy Kane and Nicholas Chandler, cue Capulets-and-Montagues, the estranged family members arriving one after another and working out strained relationships.

I enjoyed the novel’s first half more than the second. In the first half, Rai builds a funny, lustful gazing and ogling back-and-forth between Gabe and Eve and focusses solely on them. She also establishes, really well I might add, Gabe and Eve’s psychic wounds, blocks to their romance that must be, if not resolved, then addressed, for their love to become a viable, committed relationship. At 35, Gabe’s facade hiding said wounds is long-set; the following sums it up neatly: “He was a tattoo artist. The son of a housekeeper. A guardian of a secret that made any union between them complicated as f—-. Too friendly and respectful of women to be a player, but definitely not any kind of good long-term bet.” Gabe is the extrovert, the conversationalist, an outsider to Kanes and Chandlers, the man on the periphery, who maintains friendly, cordial relations with all and yet harbors hurt and loneliness. “Never let them see you cry,” even more than Gabe’s gregarious demeanor, is Eve’s motto. She is ” … the youngest, the girl, the baby. The afterthought. The useless one. Despair … pressed down hard, but she’d kept her face expressionless, because that was what she did … ” Both Gabe and Eve wear masks and cope. But masks slip in the face of mutual desire and, to their hearts-held-back consternation, mutual liking. I especially enjoyed their psychic growth arc, though in short supply (more of that later).

Rai also does a great job of, insofar as a meritocracy allows, writing a contemporary cross-class romance, rich-girl to poor-boy is a trope I adore. Eve and Gabe’s perspective on money, wealth, and privilege are nicely in contradistinction. This makes for a compelling little subtext, alas, left by the wayside as identities and family relationships take precedence. But we do have these two character-thought gems: “She [Eve] had the money to buy everything, but the things she wanted couldn’t be bought. Sometimes she felt like she was starving, even when she was eating four-course meals” and ” … he’d wanted something he’d bought and paid for himself. Something that would prove to the town and to the world he was more than an abandoned, unwanted charity case.”

Another aspect to Eve and Gabe’s characters that I thought particularly beautifully developed was their mutual ability to hide, from each other, those they love, and even themselves. How they open up and willingly reveal their vulnerabilities is Rai’s specialty. Eve, for example, is a woman who’s stymied by feelings of being less than. Her hyper-sensitivity makes her shrink from intimacy and appear aloof: ” … when rejection did come it felt fierce and cruel no matter how it was delivered. Even a gentle ‘no, thank you’ or chastisement left her craving a dark spot to lick her wounds and obsess over all the things she’d done wrong.” Gabe hides his hurt behind a happy-go-lucky, devil-may-care camaraderie, friendly to all, friend to none, but Eve elicits feelings and yearning, beyond the sexual, for connection, that frighten his long-established guise: “He’d play it cool. Keep his mask in rigid place. Smile. Look pretty. Charm people. He wouldn’t let her know who he truly was.”

In the end, no matter how much I loved Gabe and Eve, there was something more of the family saga to Rai’s novel than romance, which left a certain dissatisfaction. I wanted more of Gabe and Eve, and I especially wanted more of Gabe and Eve together. Most of their “together scenes” were in the bedroom. I can’t say that Rai didn’t show their feelings and vulnerabilities in the love scenes, but didn’t show them anywhere else. Nevertheless, there were gem moments and gem writing to Rai’s novel and I’d seek out the series’s first two romances, as well as anticipate new ones. With Miss Austen, I would say Alisha Rai’s Hurts To Love You offers “real comfort,” Emma.

Alisha Rai’s Hurts To Love You is published by Avon Books. It was released on March 27th and may be found at your preferred vendor. I received an e-ARC, from Avon Books, via Edelweiss+.