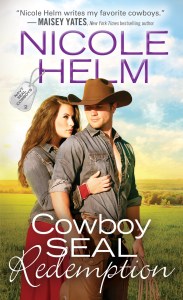 Nicole Helm’s Navy SEAL Cowboys series builds a world of hope and love for broken people. It is no wonder that its geographic setting, fictional “Blue Valley” Montana, is a land of sky, mountain, and range, a world the noise of urban life, or the bombs of deserts far away haven’t touched. Except they have. By war and those who’ve returned from it, broken in spirit and body. Helm’s heroes are men who served in Afghanistan and were injured externally and internally, when one of the them, the ghost who stands sentry to their worst memories and their best (because they cared so much for one another), Geiger. But they are now in Montana, Alex Maguire, Jack Armstrong, and Gabe Cortez, to bring renewed life and hope to broken vets at their aptly-named Revival Ranch. Helm’s heroines are often survivors of domestic wars, now grown women who knew a childhood of abuse, fear, and neglect. Helm brings the broken man and woman together so they can build a new life. Sex doesn’t have the answers (though there’s that too and it’s good), romance doesn’t (though candles are lit and flowers are bought), but healing comes through therapy, talking to each other, striving for understanding, and being honest with, and true to, oneself. Like her obvious professional buddy Maisey Yates, Helm writes to her own tune of redemptive love, through confession (secular and personal), connection, and creating bonds with others, rather than breaking or avoiding them. To reach this point, however, hero and heroine must go through an agon of being broken open and exposed.

In Cowboy SEAL Redemption, Rose Rogers owns Blue Valley’s dive-bar, Pioneer Spirit. She is baby sister to Delia Shaw, the first book’s heroine. Like Delia, Rose is damaged by a childhood with an abusive father and enabling mother. Her deepest secret is that she feels she failed her sisters, failed to fight back against her father, and failed to not enable him. Rose is riddled by guilt and wears a tough, snarky, tattooed, and bad-girl mask to protect her feelings of unworthiness. Hero Jack Armstrong is less damaged by his experiences in Afghanistan, though they’re still part of his brokenness, as he is by a family betrayal. In Afghanistan, a bomb took his purpose and the family betrayal took his self-worth. When we first meet Rose and Jack, there’s a false impression that Rose is the stronger of the two. What unites them is a mutual, though unspoken belief in their own unlove-ability. They strike a deal of sorts: Rose needs Jack to watch out for her abusive father, recently released from jail, and Jack needs Rose to pretend to be his girlfriend when his family comes to town. Premise achieved.

What transpires after the novel’s first few chapters is Helm’s adept and sensitive hand peeling away at her protagonists’ layers and, like Yates, breaking them open in scenes of confession and shame. This is their test and the catalyst is love, yearning, desire for connection and commitment. Because, Helm argues, love is scary. So is therapy. When Jack walks into his first therapy session with Monica (Revival Ranch’s resident therapist and the heroine of book 3, woot!), he wants to be “fixed”. Monica admonishes him by saying she can’t “fix” him; she can help him, but their sessions are whatever he wants them to be. Jack learns to open up and is able to meet his family in acts of forgiveness, or at least terms-coming. Having Rose with him helps, because he likes her, wants her yes, and, for the first time in a long time, feels he has someone in his corner.

Despite the external tough-girl, Rose is a loving, giving person. Her problem is she can’t see herself as such. Rose’s wound to her self-worth runs deeper than Jack’s … maybe because, though estranged, Jack’s family loves him. They have their troubles, but they are not traumatic ones in the end. One of the things I loved most about the romance is that Jack won’t settle for Rose’s offer of no-strings sex. He’s a strings kinda guy and she’s a girl who can’t see how she can ever possibly deserve strings. When she propositions him to take it or leave it, he “leaves it” and it’s one of the best little romance scenes I’ve ever read. In turn, a nice little reversal of alpha-male modesty in place of horn-dog-ness. As Jack gains emotional strength, Rose weakens and breaks open more and more. Rose’s problem: she can’t separate her desire for Jack from her feelings for Jack. Her feelings say “stay, commit, love” and her fears say “run away”. Isn’t that the whole premise of the genre? The whole raison d’être of the HEA? That the corporeal and mundane cannot be separated from the emotional and meaningful? I loved Rose and Jack’s journey to wholeness. And Helm can keep these wonderful romances coming. With Miss Austen, we deem Cowboy SEAL Redemption evidence of “a mind lively and at ease,” Emma.

Nicole Helm’s Cowboy SEAL Redemption is published by Sourcebooks Casablanca. It was released on June 5th and may be found at your preferred vendor. I received an e-ARC from Sourcebooks, via Netgalley.