I admit I was very curious to try a Jenny Holiday’s romance, after hearing Twitter-praise amidst murmurs of rom-com … BUT, I’m not a rom-com fan. Sex and the City is puerile (Holiday takes a sentimental nod to it here). I like some gravitas to my roms; I like wit, but not humour. With lawyer (*moue of disappointment*) romantic leads, Holiday had several prejudicial strikes against her. Add protagonists who watch baseball over hockey (even though, as a Toronto-set romance, *shudders* that would mean Leafs), I can’t really say I was disposed to love this. I’m also not a fan of wedding settings, especially contemporary wedding settings, with their propensity for destination, vineyards, officiates in place of synagogues, rabbis, priests, and churches, imams and mosques. I sound like a cranky, old lady, but I might as well own it and enjoy it. It’s my crank and I’ll cackle and snark if I want to. So, the series premise: weddings of (best) friends, wedding planning, brides and maidens of honour, dress disasters, bachelor and bachelorette parties. In the case of series novel #2, It Takes Two, the heroine is Wendy Liu, best friend to bride Jane. The hero? The bride’s brother, Noah Denning, the guy who took care of Wendy when her father died, the guy Wendy’s been sparring with for years … and the guy who also stood her up at the high school prom.

Holiday develops Wendy and Jane’s friendship, which I enjoyed. I like it when heroines have important relationships outside of the hero. Wendy and Jane, other than a childhood propensity for being bookish and studious, were linked by a common tragedy. They lost their fathers and bonded in their exclusive “Dead Dads” and “Lost Girls” Clubs. In stepped older brother Noah to take care of them (as well as his grieving mother). This heightened sense of responsibility is Noah’s characterization’s sole “humour”. Holiday’s romance is very much about the heroines. I am happy to say, however, that this is not women’s fiction. It’s very much Wendy’s story: her vulnerabilities, her weaknesses, her hurts, but also her strength, humour, hard work, and honesty, with herself and others, but also her come-to-Wendy moment with Noah and all the emotional baggage it entails.

Jane’s wedding brings Wendy and Noah together time and again as the narrative follows the wedding plans, the bride’s brother and best friend’s roles tantamount to its success … throwing two antagonists together. Why the antagonist when Noah was as “there”, supporting and cheering Wendy through her high school years, as he was for his sister. It goes back to the night Noah stood Wendy up at the prom and broke her heart. As a result, Wendy is hesitant with her feelings and carefree about her lovers, thanks when she fell in love and was, as she perceives, rejected. Noah, needless to say, in a duh-dude way, hasn’t a clue why Wendy is either scarce through his Toronto visits (he lawyers in NYC), or antagonistic. The wedding, however, sees them spending more time together than they have since he moved to NYC seventeen years ago. This is how and why Noah and Wendy’s romantic roosters come home to, well, um, roost, though they have way more wild monkey shenanigans than they do sleep.

The great strength of Holiday’s romance isn’t the pranks and upman- and -womanship Wendy and Noah share, it’s Wendy and her honest, raw, uncomfortable feelings. As someone who’s watched a lot of friends marry and/or partner (’tis a spinster’s lot), the changes in those relationships are complex and contradictory. On the one hand, you love your friend and celebrate her happiness; on the other, you’re no longer the primary relationship in his/her life. You’re caught amongst love, jealousy, regret, fear, and guilt.  All the while, when you’re hurt, you in turn have to put on the celebratory mantle, “rah rah” and even, *gasp*, plan things like showers and bachelorette parties, write toast speeches and put your vulnerable self into a wedding planner’s vision of a *shudder* bridesmaid’s, or maid of honour’s, dress. Wendy is “selfishly, sad that Jane was getting married.” Wendy’s brave-strong-woman face crumbles as she thinks she’s losing her friend and being overwhelmed by her yearning for Noah.

With the death of her mother, Wendy has only her Aunt Mary. As a girl and now woman who earned everything she has on her own, success, apartment, wardrobe, life-style, she sure knows how to put up a mask. Her thoughts are often less than honourable about Jane and Jane’s lovely, poor fiancé, Cameron. In a way, sparring and competing with Noah is a relief, it’s familiar, an outlet and fun. It allows Wendy to hide her hurt, hurt over the changes to her relationship with her best friend and the return of the man she’s still in love with. All of this Holiday does well. The writing is smooth, droll, and pithy. Noah and Wendy banter and contend, challenge and dare each other to the culmination of their rivalry: the bachelor and bachelorette parties.

By besting Noah, Wendy can subsume her confusion and shame over her feelings about Jane’s wedding and yearning to be with Noah. Wendy’s bachelorette party planning borders on the uncomfortable. Wendy doesn’t seem to get any satisfaction, instead ” … she was… ashamed. Ashamed for shit-talking Cameron. Ashamed of wishing Jane wasn’t getting married. Ashamed she was jealous over it. Ashamed of the stupid, juvenile bet with Noah that had inspired her to bring the bachelorette party to Vegas … ” This honesty and delving into her character’s vulnerabilities are what I enjoyed most about Holiday’s romance. All the fun and games of the first half give way to an honest poignancy that I thought beautifully developped. The romance with Noah was less interesting than Wendy’s growth, stumbles and stubbornness, strength and humour. Noah paled in comparison. In the end, I thought he was an instrument to give Wendy everything she wanted and, admittedly, deserved. With Miss Austen, we say that Jenny Holiday’s It Takes Two offers “real comfort,” Emma.

Jenny Holiday’s It Takes Two is published by Forever Romance (Grand Central Publishing). It was released on June 26th and may be found at your preferred vendor. I received an e-ARC from Forever, via Netgalley. 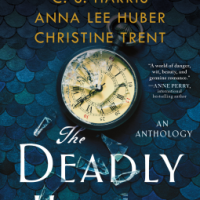