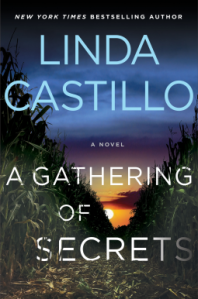 I remember reading Linda Castillo’s first Kate Burkholder murder mystery, Sworn To Silence. I’d been reading romance steadily for two years and had come to realize that my previous mystery reading enjoyed the occasional romance that was included more than the mystery itself. What I missed about reading mysteries, though, was a sympathetic amateur/professional sleuth/detective, a voice of justice that rang true and vibrant and that I felt connected to. While Sworn To Silence‘s opening page was too violent for squeamish me, Kate captured my interest and sympathy. Castillo’s detective is, in this present volume, A Gathering Of Secrets, Painters Mill Ohio’s chief of police. She’d grown up as a member of their Amish community, but a teen-age sexual assault and the subsequent events and estrangements with family and community meant she left her sense of belonging behind. As a cop and now chief, Kate is nevertheless uniquely placed to deal with crimes occurring in Amish country, knowledgeable and understanding, yet very much dedicated to justice and the rule of law that comes with a secular perspective. Kate is a wonderful creation: fair, persistent, compassionate where she needs to be, never deviating from applying the law, but fully aware of the nuances of even the most heinous of crimes, and always, always empathetic to everyone affected, victims’ and victimizers’ families and communities.

With a background in category romantic suspense, Castillo also knows how to build a romance ARC and give Kate the hero she deserves. In Sworn To Silence, if memory serves, John Tomasetti is transplanted to Amish country and works in tandem with Kate on her case and the ones that follow. Their attraction is evident from the first book, but their histories are tormented, difficult, and their love, too often in previous books, seems doomed. Without giving too much away, it’s sigh-worthy to finally see Kate and John achieve happiness in this tenth novel. Their relationship is one borne of love and friendship and its central symbol, on their renovated Victorian farmhouse, is a coop full of newly-borne chicks. I won’t say more for fear of spoilers, except that it’s one of the most romantic scenes I’ve read this year, in a novel that is definitely not a romance.

A Gathering Of Secrets opens with the suicide of a seventeen-year-old Amish girl. That scene is key to the mystery’s resolution. It’s never in Kate’s detecting radar and the girl’s family and community, though they mourn her, are leery of outsiders, even an “outsider” of their own, such as Kate, to bring anyone “in” to discover cause and/or motive. Six months go by and Kate is called to a murder scene that will become the novel’s main mystery: the deliberate immolation of an eighteen-year-old Amish man, Daniel Gingerich. As with previous novels, Kate’s pursuit of the truth is conducted amidst the contradictions of shared Englischer-Amish country and her own, though much less so than at the series’s start, conflicted self. The Amish she interviews are portrayed in a sympathetic light. There is great unity and support to be found in the community. At the same time, the Amish’s choice to remain apart from mainstream society and deep sense of the proprieties make them vulnerable to dealing with injustice in an insular fashion; hence, the title’s reference to “secrets”. Kate, her team of officers, and John, uncover, by means of meticulous technical and interview police skills, the road that led Daniel Gingerich to that barn fire. I think one of the things I like best is Castillo’s ability to draw cops and perpetrators, victims, their families, and others caught in the cross-fire, with love and sympathy, with liking and respect in many cases, and with nuance even in the villains.

I’m not interested in dwelling on the novel’s crime and solution aspect, the procedure part of the procedural, but in its interstices, moments of great writing, clarity, exposure, heightened language and fellow-feeling that Castillo conveys. Kate’s ruminations on murder will tell you who Kate is, how she thinks, and what constitutes the novel’s ethic:

As we follow Kate, John, and her officers, to the resolution, it is eminently evident that this murder makes sense. How and why is part of the pleasure of reading A Gathering Of Secrets. Castillo captures in Kate how your work-life, if it involves people in crisis or difficulty, can adhere to your own, not only by touching the present but in recalling the past:

Certain cases take on a life of their own. They touch us in unexpected ways. Sometimes they touch us in way we don’t want to be touched. They take us to places we don’t want to venture. Remind us of people we don’t want to be reminded of. Cases are rarely limited to the victim or loved ones or the families. Cops get drawn in, too. They become involved with the people they come into contact with. While we do our best to keep a handle on all of those gnarly emotions and preconceived notions …

In many of the previous books, this is the main note – for Kate and John. Finally, in this tenth volume, Kate finds peace and joy too:

The chatter in my head grinds to a halt. Turning, I look out across our property, and for the first time in days, I see the simple beauty of my surroundings and I drink it in. Somehow I hadn’t noticed that the foliage is abloom with fall color. I stand there, listening to the calls of the red-winged blackbirds that swoop and play among the willows by the pond. The whisper of the wind through the treetops. The bawling of Mr. Cline’s cattle to the south. The tinkle of the wind chimes I bought on impulse at one of the Amish tourist shops in town. Autumn evenings in this part of Ohio are magical; they are a feast for the senses, balm for the soul of a troubled cop.

It is significant that Kate shares this beauty and joy with John: their peace and love are hard-won and therefore even more pleasurable for the reader to read about. I don’t know if, having brought them to this more-than-equanimity point, Castillo will be done with John and Kate. Kate promotes a most intriguing rookie-cop character in this novel and I speculate whether Mona Kurtz will play a greater role in volumes to come. Whether my hunch is correct or not, I’ll still come back to Painters Kill to be with some of my favourite characters. With Miss Austen, we say that A Gathering Of Secrets is evidence of “a mind lively and at ease,” Emma.

Linda Castillo’s A Gathering Of Secrets is published by Minotaur Books. It was released on July 10th and may be found at your preferred vendor. I received an e-ARC from Minotaur Books, via Netgalley.

4 thoughts on “REVIEW: Linda Castillo’s A GATHERING OF SECRETS”