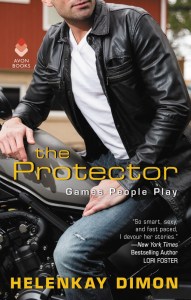 When I started to read romance in 2007, after more than thirty years away, much of what I read was romantic suspense. Probably because I was coming to romance from reading mystery novels. One of the first romantic suspense authors I read was HelenKay Dimon. I was new to the genre and she was too: so, we’ve kind of romance grown up together (please note I have no personal acquaintance with Ms Dimon, I meant this solely in a metaphoric way). I read the Men of Hawaii series and enjoyed them (not as much as my favourites, Lucy Munroe’s Mercenary Trilogy or Shannon K. Butcher’s Delta Force) well enough. I remembered how I loved her heroes’ wit and humour, how they were alphas without the hole. And I liked her heroines, determined, smart, but soft and compassionate too, without ever losing their sense of self and identity in loving the hero. Returning to Dimon’s romantic suspense after ten years plus, I can see how the formula worked for her then and works for her now. I’m not sure it’s still what I want the lion’s share of my romance reading to be, but I did enjoy the travel down romance-reader’s memory lane.

When The Protector opens, hero Damon Knox and heroine Cate Pendleton are brought together by the usual ludicrous romantic suspense premise. Cate is searching for the reasons behind her sister’s death at a remote Pennsylvania commune-like school, The Sullivan School. Shauna has been dead for a while, but Cate wants to know what happened to her, to bring closure to her own sense of guilt for not having been there as much as she ought to and to give a reason for Shauna’s death to their mother. She appeals to the leader of one of those quasi-governmental secret ops group’s leader, Wren (the “fixer” of the first volume), who brings her together with lone-wolf grump, Damon. They travel to the controversial locked-gate school (the scene of two FBI shoot-outs) to uncover the reason for Shauna’s plunge from the grounds’ water tower.

Frankly, the whole compound infiltration and subsequent badness that occurs, putting both Cate and Damon in danger (at least Cate never has any TSTL moments) left me cold. I found the plot surrounding Shauna’s death meandered. Revelations came fast and furious, but the Shauna’s-death resolution came late and anti-climactically. The Protector  is more interesting as romantic than as suspense. Cate and Damon’s banter was funny, sharp, and quick, just the way I like it. I thought they fell into insta-lust in chapter one, but their attraction and liking for each was well-developped and believable to follow. On a sour note, Damon and his secret-agent buddies indulge in that provocative guy-talk that says I-care-but-I’m-going-to-torment-you-with-put-downs-’cause-that’s-how-I-show -my-love. I can’t stand that ribbing guy-talk, but Dimon kept it to a minimum and it was funny at times.

Cate and Damon, despite his grumpiness, are personable, engaging characters. Damon suffers from the chronic unworthiness of a hero who made one wrong move in the past and now has to live a life of lonely cynicism, hiding his big ole hurt heart under layers of wise-guy cracks. Thankfully, Cate is one smart cookie who sees right through Damon’s carapace of indifference to the white-knight heart that beats underneath. Damon and Cate have great hot sex, where no one seduces the other; it’s beautifully mutual, consensual, and hawt, a bit too hawt for my sensibilities, but there are also quite a few fade-to-black bedroom scenes, for which I was grateful. Also, a minimum of dirty talk, which I hate. What I liked most about Dimon’s The Protector was Dimon’s decision to avoid the Big Betrayal and subsequent hero-and-heroine separation. Instead, Cate and Damon have a good ole yelling fight and a great make-up scene without the angsty weeping-into-a-whiskey-glass-eating-a-tub-of-Ben-and-Jerry’s separation. There’s no grovel, or separated misery, just bellowing truth-telling and a classic Hollywood-kiss ending. Also, a pretty cool epilogue (no babies). A tad derivative, a tad “tired”, but still enjoyable, with Miss Austen, we deem The Protector “real comfort,” Emma.

HelenKay Dimon’s The Protector is published by Avon Books. It was released on July 31st and may be found at your preferred vendor. I received an e-ARC from Avon Books, via Edelweiss+.