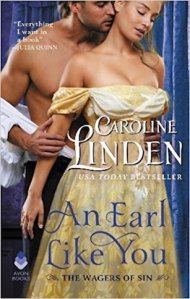 Readers familiar with MBRR will know I am interested in romance’s dark moment, which I define as a betrayal. The darker and more heinous the betrayal, the better executed the narrative tension, when it seems as if hero and heroine will never mend their rift. In Linden’s latest, An Earl Like You (second in the series The Wagers of Sin), this new-to-me author deftly creates a romance which sustains the coming betrayal from the first chapter to the final. I was coiled with tension from the get-go which I attribute to Linden’s premise. Upon his father’s death, Hugh Deveraux, 7th Earl of Hastings, learns that the 6th earl’s profligate ways left their family destitute: estates given to gardens and follies rather than tenants, debts galore, two sisters dowry-less and a mother grieving; the Deveraux women are ignorant of their new circumstances … and Hugh wants to keep it that way. What’s a peer to do but take to the gambling tables in a desperate attempt to ensure his mother’s well-being and sisters’ future? Until Hugh loses and is faced with a devil’s bargain from a wealthy speculator, Edward Cross, looking to ensure his daughter’s future. Cross asks Hugh to meet him at his palatial Greenwich home, tells him he now holds his debts and will call them in …  unless Hugh woos and wins Cross’s plain, spinster daughter, Eliza.

Reading the raw premise, you’d think Hugh mercenary, Edward manipulative, and Eliza gullible. But Linden managed to give them a nuance and sympathy that surprised and delighted me. Edward, though less developped, is a man who loves his daughter, feels the ache of her motherlessness, and carefully chooses and crafts a marriage that proves compatible in body, spirit, and mind. Hugh is a man who has come to realize his father’s charm and joie de vivre covered his carelessness, ” … his father’s good nature had concealed a few intractable flaws.” Hugh is grim and serious, bent on gambling his way to estate solvency and caring for his mother and sisters.

Hugh is everything steady, sure, secure, and loving to his family. When confronted with Edward’s ultimatum, though he’d sacrifice himself for his family, he also wants to behave in a caring and honourable manner towards Eliza. And is Eliza a naïve dufus? I loved Eliza. She was smart, caring, funny, and loving. There is no doubt that Hugh and Eliza are compatible and their marriage can be a long and happy one. But there stands that devil’s bargain between them: Hugh’s secret and Eliza’s unworldly love.

I adored Eliza’s capacity for happiness. We are introduced to her at her father’s Greenwich house, which she has made beautiful and comfortable. She lives contentedly with her beloved dog, the irrepressible foundling mutt, Willy, and her gardening. Our Eliza has the great makings of a feral, happy spinster. She ponders her fate: “Eliza was coming to accept, deep down, that she would end up as one of those rich old ladies with a pack of dogs – she hoped to be quite an eccentric – ” Her father, on the other hand, is insistent on marriage and family. But Eliza’s sole “Season” left her a traumatized wallflower, uninterested in her suitors, their suits obvious plays for her fortune. Eliza is no fool.

Eliza possesses a delightful humour. She says to her father, “Eliza folded her hands and assumed a dreamy expression. ‘Surely there’s some viscount or baronet out there, titled and handsome but dull-witted and utterly penniless, who might be willing to have me?’ ” What Eliza says is sad, but what she does, her gesture and expression, speak of her wit and humour. And she is happy: ” ‘Even as a spinster. If I never meet a handsome, charming, dull-witted, impoverished baronet, I shall still be happy, with you and Willy and my friends.” And her garden. I believed her. When the handsome earl shows up, however, well-mannered and warm, she falls in love.

Hugh, on the other hand, has Edward’s ultimatum hanging over him like a Damocles sword. I liked how Linden painted Hugh’s sensitivity and sensibility. Hugh isn’t a lady-player and he gambles only because he can win the money necessary to keep up an appearance of wealth for his mother and sisters. He doesn’t want to lie, but feels compelled to do so to protect those he loves. While he isn’t in love with Eliza YET, he likes her and immediately recognizes her qualities:

She wasn’t a beauty, nor even very pretty. London society would call her plain. But when she gazed at a man that way, with her heart in her eyes, she was not ordinary.

… she was as he had thought the first time he met her, somewhat shy but kind and decent.

She was warm, generous, and honest, with a quiet but droll sense of humor, and he found himself looking forward to seeing her.

What was wrong with him? She’d made him laugh, of course, saying she’d never been well kissed. A charming joke from a spinster. So he’d kissed her again, and somehow between the sensual little moans she made and the way her fingers dug into his shirt as if she wanted to tear it off, he’d gone a bit mad.

Eliza was … well, aside from her parentage, she was lovely. Genuine, warm, and kind … Eliza was exactly as she appeared to be. But deep down, Hugh knew it was very bad that she didn’t know. That made him a liar, a cheat, and a manipulator, just as bad as her father. The more he knew Eliza, the more he liked her.

Eliza … All she did was think of others and give freely of herself and her time … giving Hugh her heart when he didn’t deserve it.

Linden did a marvelous job of giving us the trajectory of Hugh’s slow-burn love for Eliza. What begins as a recognition of her qualities moves to esteem. As esteem grows, Hugh’s attraction burns. As liking blooms, Hugh seeks Eliza’s companionship, advice, and conversation. And as Hugh’s feelings strengthen, so does his guilt at deceiving his wife and fear of hurting her and losing her.

Eliza and Hugh are people who thrive in marriage and family life. They celebrate fidelity and commitment. They don’t adhere to vows out of duty and responsibility only. They enjoy each other, in bed and out. They’re mature, loving, and flourish within a comfortable, quiet family home. They’re the best of home-makers, really. And their capacity for happiness in their compatibility is bittersweet: the reader knows that Hugh’s attempt to protect his beloved wife from the truth (and he truly struggles with this, telling or not telling her) will come home to roost in the worst possible way. Their confrontation is magnificent and their reconciliation heart-clenchingly good. Linden is given to exposition, but the characters and story were so good, I overlooked it. With Miss Austen, here’s what we say about one of the best romances I’ve read this year, “there is no charm equal to tenderness of heart,” Emma.

Caroline Linden’s An Earl Like You is published by Avon Books. It released on August 28th and may be procured from your preferred vendor. I received an e-ARC from Avon Books, via Edelweiss+.

14 thoughts on “REVIEW: Caroline Linden’s AN EARL LIKE YOU”