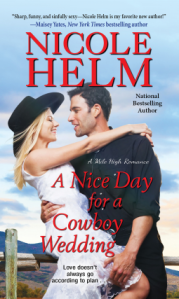 We meet Cora Preston, the heroine of Nicole Helm’s A Nice Day For A Cowboy Wedding, as she comes into her own: “She was reaching for the stars now, or maybe those snow-peaked mountains. Strong, immovable, and majestic.” Five years ago, Cora and her then seven-year-old, Micah, lived with an abusive husband and father. When Stephen threatened Micah rather than her, Cora divorced him, got full custody of Micah and a restraining order. In the intervening years, Cora and Micah moved to small-town Gracely to live with Lilly, her sister. They’ve been difficult, growing-pain years, but the movement has been forward and positive. Cora and Micah are forging a new life. Cora’s gleaned herself off of total dependence on her older sister, is living on her own with her son, and partnering with Lilly to launch a wedding-planning business. More importantly, she and Micah’s therapy, while a work in progress, is helping them cope with the day-to-day. Micah is showing signs of teen-age rebellion and sullenness, but Cora is mothering more than being mothered. Micah is in baseball day-camp and Cora on her way to her first wedding plan client, Deb Tyler of Tyler Ranch. Cora is a vulnerable heroine, but determined to succeed and do right by her son. I liked her from the get-go.

As Cora’s mini-something makes its way to the Tyler ranch, good-guy hero Shane Tyler, stalwart, handsome, and responsible, is having ungenerous thoughts about his mother’s, Deb’s, fiancé, ” … scheming, lying, thieving Ben Donahue.” And he’s about to meet the woman who’s going to make his mother’s dream wedding a reality – while he aims to stop it. On the surface, it seems Shane and Cora will clash and spend the novel’s duration working at cross-purposes. Instead, Helm uses this frivolous at best, puerile at worst, premise, to say something about healing the past, understanding yourself, learning to understand the person you’re falling in love with, and navigating what it means to be a family. Shane and Cora have more in common than they do apart. And this is one of the secrets of the romance genre: seemingly impassable odds for the couple turn into the means by which hero and heroine will work out their HEA.

For Helm, the bridge between Cora and Shane is simple: “Shane would do anything to protect his family” and Cora will do anything to protect her son and ensure that he thrives. They both feel, for spoilerish reasons in Shane’s case, they have to atone for the past. Helm offers them, and by extension the reader, the “out” Cora and Shane’ll need to work out their differences and turn them to commonalities. Helm’s strength lies in her Ariadne’s thread thrown to reader, hero, and heroine in the form of sentences pointing to mutual understanding, respect, and consideration. Shane watches Cora with Micah, her care and love, also her confusion and uncertainty: “Shane knew what it was to look at someone and be afraid and at a loss and just desperate to figure out what to do to make everything okay.” Cora doesn’t know what to do with this suddenly difficult teen. Their relationship has had to be mitigated by therapy, to offset the pernicious effects of the abuse Cora suffered and Micah witnessed. We watch as Cora flexes her good-mother muscles and as Shane learns to respect his mother’s wishes. Helm’s portrait of their growth is wonderful.

What of their relationship? Nice Day For A Cowboy Wedding is, after all, a romance and the romance is central. Helm rightly cannot have much by way of dramatic conflict for Shane and Cora. Cora’s had more than her share and Shane is too silently strong and capable. too honest and good to engage in any mind or otherwise games. Instead, Helm creates an ideal hero for Cora, one so exemplary, though flawed in his way, that Cora can trust and like him, and still notice how he fills out his cowboy jeans. Their physical attraction and relationship is flirtatiously gentle and gently flirtatious. Shane is a man made for fidelity and commitment and perfect for what Micah and Cora need. His thoughts on Cora: “It was this kind of thing. Not just great sex, but an easy camaraderie. A partner in things: to talk to, tease, enjoy … what a partnership would look like. With Cora, he didn’t care what it looked like. As long as it was with her.” I loved the idea of “camaraderie” as a basis for a relationship. It’s as good as the conviviality Cora’s and Shane’s families enjoy together. And the two things that round out every romance’s positive ending.

At this point in my review, I’m making Cora and Shane’s relationship sound boring and it is anything but. If they were cardboard cut-outs, then yes, maybe we can say Helm’s couple is a tad ho-hum. But they do have interesting “stuff” to work through. Firstly, separate and for different reasons, Cora and Shane have to realize they are deserving of love and that their actions haven’t failed their families or each other. Shane is a man who is compelled to protect others, to always appear strong, and to be the one who “fixes” everything for those he loves. Cora is a woman who’s yet to thoroughly feel as if she CAN fix anything, can protect her son, and take care of herself. There are moments when Shane has to let go: ” … he was selfish enough to want to keep his weaknesses from her. His failures.” He can be vulnerable and loving and protective, that’s his lesson to learn and enact in the HEA; Cora’s is to trust herself, to acknowledge her strength, to embrace what Shane offers: love, commitment, family, consideration, respect, and laughter. But their road to the HEA reaches an emotional impasse:

“The sad fact of the matter was, no one wanted that. His help, his guidance, his protection. No one wanted him.”

The resolution, dear fellow-readers? Is one of such depth, simplicity and beauty. With Miss Austen, we find in Helm’s A Nice Day For A Cowboy Wedding “no charm equal to tenderness of heart,” Emma.

Nicole Helm’s A Nice Day For A Cowboy Wedding is published by Zebra Books. It was released on August 28th and may be found at your preferred vendors. I received an e-ARC from Zebra Books, via Netgalley.