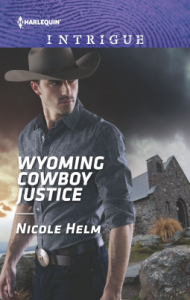 So Nicole Helm takes her place with Maisey Yates in the I-read-all-their-books category of my romance reading. And even though I was feeling surfeited? satiated? on Yates-Helm, I can’t resist those Harq romantic suspense covers. It’s too bad that lanky, near-clean-shaven, moderately-good-looking dude on the cover has nothing to do with one of the most marvelous romance heroes I’ve read in ages. Grady Carson is HUGE, broad, bearded, rough, a saloon-owner with dubious liquor-selling practices, who gets mixed up with the straight-and-narrow town deputy, Lauren Delaney. As it turns out the Carsons and Delaneys have been harboring a feud in Bent, Wyoming, that makes Capulets and Montagues, Hatfields and McCoys, look like spats. Enter one dead cousin, Jason Delaney and a half-brother suspect, Clint Danvers, and Deputy Delaney and saloon, “Rightful Claim”, proprietor, work together and argue and fight their attraction to find the culprit in Laurel’s case and exonerate baby bro in Grady’s case. All pretty standard RS stuff and ho-hum, so what makes this great?

Well, it certainly isn’t the suspense part of RS. Frankly, I lost interest in the whodunit and whydunit and found the “villains” moustache-twirling cardboard cut-outs. Probably the suspense part was better than I thought because Grady and Laurel were so great everything else paled. Grady. Sigh. Grady and Laurel together. Double sigh. They were just so damn FUN. Laurel was straight-woman to Grady’s over-wroughtness. And Grady, for a big, gruff he-man, seeming alpha-hero, was atypical of what we’ve come to expect. Oh, he was protective and handsome and sexually potent, but he was also a bit of bumbler, readily admitted weakness and so totally innocently open about his feelings. Laurel was a great match: she was conscientious, concerned, of impeccable integrity, smart, and also totally open about her feelings. No games, no denials, no betrayal, no dark moment — and you know how much I love my dark moment — and yet I enjoyed this immensely.

I thought the feud was an inspired idea, giving Helm’s RS an old-fashioned Hollywood Western feel. At the same time, the crime, without spoiling, is totally contemporary and will resonate with readers. Laurel and Grady were both typically romance opposites-attract and fresh in how they differed from our tropish expectations. I’ll share a few snippets to tantalize. Here’s where I fell in love with Grady: “Grady was a lot of things — a tatooed, snarling, no-respect-for-authority hooligan … “, a sheep in “hooligan’s” clothing was our Grady. He was respectful, thoughtful, and caring, but his tumble-weed-rough demeanor was a hoot. Laurel’s I-can’t-help-myself response sets up their DEE-lightful antagonism: “He walked past her, way closer than he needed to, and that wolfish smile was way too bright, way too feral. How could anyone call him attractive? He was downright … downright … wild, uncivilized, lawless. All terrible things. Or so she told herself as often as she could manage to make her brain function when he was smirking at her.” I loved how Grady’s “ferality” messes with Laurel’s control and calm.

Just like Helm builds on Grady’s wildness, she cultivates his softie-ness: “Trouble wasn’t good for business, and as much as he would never admit to anyone, a little too hard on his heart.” How adorbs is that? With her uprightness and his not, Helm makes them a great load of fun to read when they’re bantering away:

“What are you going to do? Eavesdrop at the bar? Beat a few answers out of people? This is a police investigation.”

She barked out a laugh. “You’re as subtle as a Mack truck.”

And as likely to not fit in many places: in pursuing the culprit-not-Grady’s-bro, dangerous, villainous dudes stalk Grady and Laurel. Grady goes charging in where angels fear to tread and Laurel has to rescue him. Oh, Grady returns the favour, but there is no doubt this is a relationship of equals. Grady respects Laurel, what she does and what she stands for. Laurel may be the quieter of the two, but it’s marvelous to see how she becomes the centre of his world. Grady isn’t just in love, he’s dedicated to Laurel and that’s pretty wonderful to read. Wyoming Cowboy Justice came when I had yet another work-week-from-hell: it’s amazing how much, I read about it from Twitter friends too, so often, romance sustains us in our everyday and not-always-easy lives.

Nicole Helm’s Wyoming Cowboy Justice is published by Harlequin Books. It was released on September 18th and may be procured from your preferred vendor. I received an e-galley from Harlequin Books, via Netgalley.