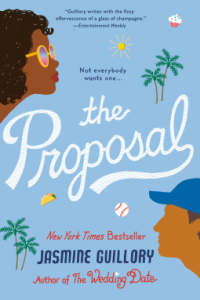 New-to-me-author Jasmine Guillory’s The Proposal certainly starts off with a bang. I was quite taken by the premise. Heroine Nik (Nikole) Paterson meets hero Dr. Carlos Ibarra at an LA Dodgers game when he rescues her from the Jumbotron-drama of having her man-bunned boyfriend proposing to her before thousands of people … not counting the ones watching on TV. This is a “proposal”, hence the title, that Nik neither wants nor anticipates. Her boyfriend Fisher, an actor with more ego than talent, is a sleep-with boyfriend and no more than that. As Carlos, at the game with his sister Angela, watches Nik’s horror-stricken face on the Jumbotron, he and Angela, only a few seats away, ward off the cameras coming at Nik when she refuses Fisher. Angela, Carlos, and Nik join Nik’s besties, Dana and Courtney, for drinks after the game and Nik and Carlos strike a friendship with some incipient attraction. They text, call, and meet for drinks, go to dinner, enjoy each other’s company, cook together, watch baseball games, and generally have a great ole time. Not soon after a few get-togethers, they become lovers.

Guillory’s Proposal may possibly be one of the most boring romances I’ve ever read. I enjoyed the premise, even though the declarative prose turned me off. This didn’t get any better as I got further into the novel either. I thought, at first, it had great potential for drama. I thought Fisher would make media-mincemeat out of Nik, in the vein of Robin York’s GREAT Deeper. But no, Fisher disappeared into Nik and Carlos’s dates and fun times. (He does reappear near the end of the novel, but only to what feels like Guillory’s trying to tie things up.) I would say that a good 85% of The Proposal is made up of Carlos and Nik enjoying each other, in and out of bed. Their time together is punctuated by Nik’s relationship with her friends and Carlos’s relationship with his family: his mother, Aunt Tia, sister, pregnant cousin Jessie and her husband Jon.

Guillory does give Nik and Carlos some mild internal conflicts. Nik had an emotionally manipulative boyfriend and she bears the scars of distrust and emotional aloofness. Carlos has an overdevelopped sense of responsibility towards his family and carries the scars of his father’s death. Because he feels he needs to take care of his family, Carlos is convinced a serious relationship is not for him. As Nik feels the same, their friends-with-benefits arrangement seems perfect. And frankly, I thought it was. I would’ve loved to have seen them part ways. Guillory offers some mildly amusing scenes between them, including a pretty droll enchilada-making one. Carlos is utterly nice and supportive of Nik; Nik is affectionate, a tad prickly, and funny. This goes on for a VERY LONG TIME.

When the dark moment arrives and arrive it does, the entire “break-up/separation” between Nik and Carlos gave me reader whiplash. Carlos has a real Jekyll-and-Hyde moment and Nik’s response is, though ho-hum, understandable. I can’t say that I enjoyed The Proposal, though I didn’t dislike it enough to DNF. I read it like one eats a boring muffin, munching away, regretting every moment of what you thought would be a great experience. I felt Guillory’s declarative prose tedious and her relentlessly didactic themes somewhat simplistic. In the end, what started with a bang died with a whimper … mine. The Proposal, to quote Miss Austen (who never sketched a scene without incisive wit, or drew a character without penetrating understanding of human nature) “had a high claim to forbearance,” Emma.

Jasmine Guillory’s The Proposal is published by Jove (Berkley). It was released on October 30th and may be found at your preferred vendor. I received an e-galley from Jove, via Netgalley.