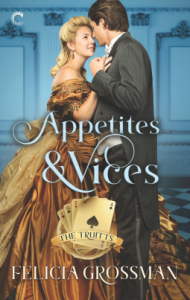 I kept Felicia Grossman’s Appetites and Vices close to my reader heart for weeks, patiently awaiting release day. I was excited about a new romance writer with an unusual premise. Sadly, work kept me at a panting pace and my reading was sporadic at best, a chapter here, a nodding over a page in bed there. My interest, maybe because of the pace at which I read, was equally uneven, enthralled at times, sluggish at others. More of that later.

For now, to the plot and premise! Which proved convoluted. In 1841 Delaware, 21-year-old Ursula Nunes, adored daughter of Judah, smart, eccentric, and Jewish, is insider and outsider to society. Outsider thanks to her religion, insider thanks to her family’s wealth. Whatever makes her an outsider to society by virtue of her birth is compounded by her eccentricities: beautiful, blonde, curvaceous, and blunt, blurting painful truths and creating awkward silences, gaps in sociable chitchat, and painful stretches without dancing partners, female friends stand at nil.

But Ursula, who keeps the family books like a gorgeous abacus, has an idea: to marry her friend, Hugo Middleton, equally removed, but blissfully gentile, and salvage both their lives. Unfortunately, Hugo’s father has other ideas, involving Hugo and the daughter of an influential man who’ll ensure him a judgeship. In enters dissipated hero, Jay Truitt, notorious womanizer of dubious sobriety, who makes a pact with Ursula: they will pretend an engagement, making her more sought-after and attractive to Hugo’s family, Jay will teach Ursula society’s ways and, in turn, he will escape his family’s strictures and travel to Europe, where he can quietly be as useless as he’s been and feels.

I adored Ursula, who, like me, doesn’t suffer fools well or easily, and I loved Jay, older but not wiser, charming, vulnerable, weak, and oh-so-interesting. They were complex, compelling, and perfectly compatible. They were outside the pale, with families who loved, but didn’t quite understand them, of questionable reputations. Ursula is distinguished by her Jewishness: ” … a four-time deviant. Her Jewishness, her wealth, her near-aggressive beauty, and her charm – or lack thereof – made her almost hopeless.” Jay is set apart by his addiction: “Two years he’d held himself together, but the moment he returned home a single craving ensorcelled his senses – too many people, too many rules, too many memories.” Ursula and Jay also share integrity, the ability to give and receive affection, and a strong protective streak, especially Ursula, who, despite her youth and inexperience, rescues her family, her friend, and Jay.

When Grossman’s novel opens and Jay and Ursula have made their pact, the narrative is peppered with witty repartee, especially from Ursula. Jay and Ursula reminded me of Chase’s Rupert and Daphne in Mr. Impossible, Jay being charm and not-much-by-way-of-brains and Ursula a brainiac of the first order. Their initial exchanges are a hoot:

There was gossip about him, and not the good kind. She frowned. Something about him being a drunkard? …

“So, a dullard, not a drunkard, and libertine to boot. I’m not sure if that’s an improvement.”

“Have you been conversing with my father?” …

“What do you want to do?” She studied him. What did this man enjoy? Besides the obvious?

“I don’t know. I’ve never really thought about it.” He shrugged, still staring out over the party. “Travel? I like meeting people.”

“And finding ways to remove their clothing.”

Despite Ursula and Jay’s banter, they have more in common than their initial opposites-convenience pact suggests. Jay and Ursula share shame: he because he disappointed his family and remains a craving, sweaty, craven addict and Ursula because she can’t get any of the social niceties right. Their initial incompatibility soon turns to a deep sympathy and Grossman does a great job of showing how two people grow in respect and affection.

But her narrative struggles under too-much-ness. It veers out-of-control from what starts out as comedic and turns into the torments of hell for Jay and an overly sentimental and dramatic family reckoning for Ursula. In a nutshell, I think Grossman’s a romance writer to watch (and I’ll follow her to the next book), but in Appetites and Vices, she isn’t quite able to steer the ship. She is a writer not quite in control of her ample material.

On the other hand, who can resist the depth and charm of passages such as these:

“Is there a difference? Between vices and appetites, I mean?” And her mouth, her perfect plump, pouty lips – even eating an apple. She’d be the death of him one of these days.

“Well – ” Jay pushed back his hair with his palm. “I suppose it comes down to control, order versus disorder. With a vice, you’ve lost all semblance of control. You crave, and you need to have what you desire, no matter the consequences. With a mere appetite, you indulge and enjoy, but if the subject was not ideal, you could pass. You aren’t filling an empty hole.”

The beauty of Grossman’s magnificent conclusion, in contrast to her saggy middle, is the notion of enough. Jay and Ursula, though there is pain and setback, find that emptiness can be filled by sharing love, through the body, heart, and spirit. When the other is enough, complete, perfect:

“No one had ever smiled at him like that, satisfied with just him.”

And as Jay says to Ursula, “I want you because you’re you and that’s all. You don’t need to be or do anything else. That’s enough. You’re enough … ” For this reader, it may not have been perfect, but Grossman’s Appetites and Vices was enough: every imperfect, original, compelling word of it. With Ms Austen, we say that Appetites and Vices is evidence of “a  mind lively and at ease,” Emma.

Felicia Grossman’s Appetites and Vices is published by Carina Press. It was released on February 18th and may be found at your preferred vendors. I received an e-ARC from Carina Press, via Netgalley.