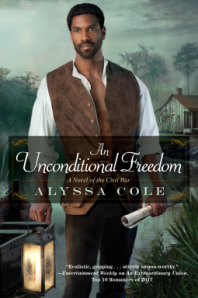 I requested an ARC of Alyssa Cole’s An Unconditional Freedom for the most superficial of reasons: I couldn’t resist the hunk on the cover. I’m a sucker for an open-necked shirt, soulful brown eyes, and the man is holding a scroll and lantern … can it get any better? As for the contents, I was open to them, but didn’t go in with any great expectations. What I found was, finally, FINALLY, someone who can put the history back in historical romance. You can’t historically “wallpaper” a history so unjust and ugly: how Cole managed to make me hold my breath with excitement, stop my heart with fear for her characters, and root for a slow-burn romance is testament to her mad writing skills.

At the end of the novel, a seasoned revolutionary in the war against slavery advising the heroine on when to hold’em and when to show’em in this righteous war says: ” ‘First thing you learn about being a Daughter — sometimes you gotta be subtle, and sometimes you gotta burn it all down.’ ” As a Daughter of Romance, Cole sure knows how to be subtle and how to burn it all down, navigating American Civil War history with sureness and skill, steering her characters’ inner worlds with insight and sensitivity and though there are moments when she burns it all down with action, she brings the ship to moor with a light touch of love, commitment, hope, and joy. Her narrative is serious, historically fascinating, and in places, even horrific, but it is never sombre, dark, or hopeless. Its movement is ever towards the light of possibility, even though the journey darkens and the way wavers.

Cole sets up her premise without too much ado, clever narrative ploy. A man bent on vengeance, Daniel Cumberland, a Massachusetts-born-and-bred Black man, trained to be a lawyer, his effort cut short when he was kidnapped and sold to a Georgia plantation owner, where he suffered beating, lashings, and soul-crushing humiliation. After Daniel was rescued, he joined the Loyalty League, a spy-ring bent on the South’s defeat. In enters Janeta Sanchez, free-born Cubana of a Black slave-woman who was freed by her owner and became his wife. Janeta has arrived at the Loyalty League to act as double-agent, seemingly as Daniel’s partner as they make their way south to Mississippi following in Jefferson Davis’s footsteps, actually to feed the Sons of the Confederacy information in the hopes they can free her father, imprisoned by Union soldiers.

As Daniel and Janeta make their way south, we are borne along on a journey that interweaves the truth of Roots over the ugliness of the Gone With the Wind myth and the inner awakenings of two wonderful, complex, interesting characters. When the novel opens, Daniel struggles with a deep sense of shame, guilt, and anger. Janeta’s journey is a coming-of-age story about a young woman, full of pride about her place in the world, naïve about historical realities and racial identity: “She’d been told time and time again of her place in the world, of everything she was despite her brown skin. Now she was learning what she was because of it.” Cole’s novel is a great lesson, but it is neither didactic nor pedantic: she tells her characters’ story with élan, clear-eyed about trial and tribulation, traversing her characters’ opening up to freedom as political, historical, social, and personal necessity.

Cole balances history with how Daniel and Janeta understand that history as it defines and determines their place in the world. Daniel rightly thinks, for example: “What was freedom? How could he be truly free if a white man could arbitrarily decide that for him?” Cole asks of her characters: how can we exercise autonomy when we are not afforded political, economic, and social? But does history hold Daniel and Janeta in thrall? If it did completely, Cole wouldn’t be able to write a romance. The legitimate, ever-present historical struggle is tempered with the constraints of the inner life, the obstacles to hope, love, and autonomy that we hold close for fear of hoping for a better life and the joy of loving and being loved, Daniel a case in point, and Janeta to follow:

… his past had risen up to claim him, as it did so often since he’d gained his freedom. His shackles had been unlocked, but the ghost of them remained, tightening against his stomach or throat or heart at the most inopportune moment to remind him that he would never, ever be rid of them.

She’d been free, and had never suffered because of the color of her skin. Not much, anyway … had she?

Daniel, of the two, is historically knowledgeable and aware. Janeta is historically naïve. On their journey, he learns how to loosen the inner constraints; Janeta must recognize the outer ones.

Daniel’s journey is of resurrection (Cole’s rendering of this image so powerful, I sobbed, but SPOILERs, I’m avoiding them); Janeta’s, a bildungsroman, Cole’s metaphor for her apt and perfect:

She was coming to understand both her place in this country and her own inner geography better; she was recharting the map of herself now that she could go out and explore its surrounding terrain.

Daniel and Janeta’s HEA is no more perfect than history is perfect, but it is hopeful, believable, love-filled, and lest you think, Cole can’t do banter and set historical records straight, I leave you with a snippet of delight:

“Are you done with the Inquisition?” Daniel asked. “I was just curious,” Janeta said, rolling her eyes. “Curiosity is your resting state,” he muttered.

It is easy to imagine Daniel and Janeta elderly, happy, sitting on the porch, holding hands and teasing. Let’s hope we can built a world where everyone of any colour, creed, ability, and identity can reach the same peace and contentment. Needless to say, I loved An Unconditional Freedom and urge you to read it right here, right now (as I go looking for the first two books in the series). With Miss Austen, we say P&P‘s “you have bewitched me,” Ms Cole.

Alyssa Cole’s An Unconditional Freedom is published by Kensington Books. It was released on February 26th and may be found at your preferred vendors. I’m grateful to Kensington Books for an e-ARC, via Netgalley.