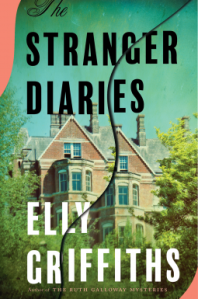 Readers may be familiar with Elly Griffiths’s Ruth Galloway and Stephens/Mephisto mysteries. I listened to the first Galloway, The Crossing Places, and enjoyed it. I have the next two queued, but you know, too many books, so little time: a reader’s lament. I did make time, on the other hand, for Griffiths’s latest, a stand-alone murder mystery and homage to gothic lit. There’s a sly nod to Georgette Heyer: all the wins. The darn thing kept me reading in waiting rooms (nose stuffed while Kindle pressed to it), through half-hearted lunch-time sandwich-eating, and curled up in my reading chair till late. The Stranger Diaries is a heck of a engrossing read; even when the mystery faltered, Griffiths’s love of gothic lit, uncanny knowledge of teacherly ways, especially English teacherly ways, and insight into love-gone-mad-and-bad obsession saw me hitting those Kindle pages furiously.

Giving you a sense of what The Stranger Diaries is about makes for convoluted retelling, but spoilers will be avoided. Divorcée Clare Cassidy lives in West Sussex with her 15-year-old daughter Georgia. She teaches English at Talgarth High and works on her book about Talgarth High’s founder, the fictional Victorian writer, R. H. Holland, whose short story, “The Stranger,” frames Griffiths’s narrative.

“The Stranger” reads like Wuthering Heights, with a narrator telling the story of a young man who, with his university friends, is invited to a mysterious mansion for initiation into the Hell Club. While he’s blindfolded, two of his friends are murdered…

According to Clare’s research, Holland was a peculiar fellow, with a broken marriage, and possibly an unsubstantiated daughter, Mariana, whose ghost is said to haunt Talgarth High. This serves as background to a mundane opening. Clare is concerned about her daughter dating an older guy, running from class to class, prepping lessons, and keeping up with her administrator’s departmental goals, having an ordinary, harried teacher’s day with petty collegial squabbles and intolerance and that exasperation-plus-indulgent-affection that every good teacher feels for her students. The spookiness of Clare’s Holland research is balanced by the everydayness of Clare meeting friends, feeling like she and her daughter aren’t communicating, and wondering if she’ll ever have sex again. Then, her friend and fellow-English-teacher, Ella Elphick, is murdered and things take a dark and convoluted turn. The body count rises and someone leaves notes in Clare’s diaries—notes she never wrote. DS Harbinder Kaur comes on the scene and hell breaks loose—with the murder leaving literary notes at the murder scenes, like “Hell is empty…”. Every good English teacher knows the end to that Tempest quotation “and all the devils are here” (one of my favourites).

While the novel opens from Clare’s point of view, Griffiths soon varies the narrative voices: DS Kaur’s and Clare’s daughter’s, Georgia’s. They are engaging and I loved them all. Griffiths does a great job of telescoping: when Kaur writes about Clare, even as the reader emerges from Clare’s POV, we get a different perspective on her personality and actions. For example, when DS Kaur visits Clare in the evening, Kaur, though literate, sarcastic, and knowing, often makes as if she’s ignorant, a great source of contrast: “The TV was off and I could see a book face down on the coffee table. The Woman In White by Wilkie Collins. I thought of Ella Elphick, sitting in the dark with her herbal tea. Someone really should teach these women about Netflix.” Ella’s murder and the others that follow expose Talgarth High in a way that, as long as the blue-and-red flashing lights of a police car don’t put a school on the nightly news report, a school can keep hidden: who has a crush on whom, how do students feel about their teachers and vice versa, who’s having an affair with whom, what petty jealousies and resentments can make for a murder? I don’t know if Griffiths has spent any time teaching high school English, but she certainly gets the atmosphere as if she has. Also, middle-aged, introverted reader-schoolmarms, like me, who love being alone in hotel rooms, as Clare notes, “I can watch Antiques Roadshow, drink specialty tea and eat biscuits.” Yes! *fist pump* The ultimate in luxuriating.

Griffiths’s mystery kept me turning the pages and her insight into school politics, characters, and psychology saw me nod in agreement, but it was her love of literature and rich use of allusion that made me happy. When Clare is shaken by her friend’s murder, she goes to bed with a book: “I look in my bookcase for something reassuring to read—P. G. Wodehouse or Georgette Heyer— … ” Me too, Clare, me too. The note by Ella’s body immediately makes sense to Clare and any self-respecting English teacher. I smiled when I read Georgia’s reminiscence of what she and Clare read: “We progressed from picture books and Noel Streatfield [yay for Ballet Shoes] to Agatha Christie [yay for the homage train scene at the end of Stranger Diaires] and Georgette Heyer. Devil’s Cub is still my favourite book and Dominic is my perfect romantic hero.” Me too, Georgia, me too. When the mysterious notes show up in Clare’s diary, this is what she tells DS Kaur: ” ‘In The Woman In White,’ I say, ‘Count Fosco, the villain, starts writing in Marian Halcombe’s diary. He takes over the narrative for a few pages. His section is called “Postscript by a sincere friend.” ‘ Harbinder says, ‘You were reading The Woman In White when I came round the other evening.’ I’m surprised she has remembered. ‘Yes,’ I say, ‘it’s one of my favourite books.’ ” I have no other reasons to throw these quotations at you than to lure my literary, gothic-loving friends to read this book.

If the tantalizing quotations won’t lure you, then maybe if I tell you that there’s an adorable dog named Herbert who saves the day? Adorable from page one and adorable and heroic by the end? Though I think that the solution to the mystery isn’t as good as the build-up, and the whodunit, given their background doesn’t mesh with the way they go about their actions (sorry, cryptic, but avoiding spoilers), I still loved The Stranger Diaries. With Miss Austen, we’d say “there’s no charm equal to tenderness of heart,” Emma.

Postscript: I’d like to convince a dear friend to read Stranger Diaries by telling her: when Ella is killed, Clare has to take over directing the school play, Little Shop of Horrors. Here are two tempting snippets of how well that goes:

” … the Plant has missed half the rehearsals.”

“The performance is less than two weeks away and I’ve had to replace the bloody Plant with a stand-in who’s about two foot tall.”