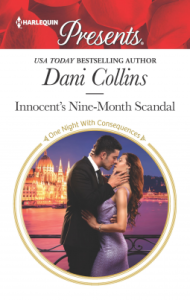 My dear friend “Shallow Reader,” loves Dani Collins and that’s rec enough for me. After the intensity of Griffiths’s Stranger Diaries and especially its Victorian-gothic length, I was happy to read a snappy category romance. Snap it did, Ms Collins’s Innocent’s Nine-Month Scandal, with my favourite kind of HP heroine, kind, generous, plain-Jane, funny, and a deliciously broody hero, not too annoyingly domineering, but definitely in the strong, caretaker arena.

Collins’s plot was HP-fare ludicrous. Rozalia Toth is in Budapest looking to find the mate to her grandmother’s earring, given to grammy, in troth, by her true-love during what may be (Collins doesn’t make this explicit) the uprising of ’56? Sadly, gram’s true-love succumbed in the riots and she travelled to America, pregnant and destitute, where she made a marriage-of-convenience with one Benedick Barsi. As grammy is now getting on, Rozalia wants to give her the chance to see the earrings as a pair. Many convoluted family connections are discussed between hero and heroine, but I admit I didn’t give them much attention. Plot isn’t why one reads an HP.

One of the earrings happens to be in the possession of brooding billionaire Hungarian hero, Viktor Rohan. Rozalia has made her way to his Budapest castle. Viktor is flinty-eyed suspicious of this American ingenue, but also potently, powerfully, and never-before-felt-this-attraction-to-a-woman overwhelmed with desire. Rozalia, a 24-year-old virgin, as our HP is wont to have, stands up to his broodiness and mistrust, but can’t resist his magnetic sexuality. They do the deed, forget the condom and—ta da—baby on the way and Viktor’s inelegant you’ll-have-to-marry-me-now proposal.

HPs are to romance what Nanaimo bars are to dessert: not too often, but when you have one, it hits the sweet-tooth spot. An HP stands only on how readily the reader immerses herself in its romance-uber-fantasy. It either draws you in and makes you happy with a jolt of romance-concentrate, or it spits you out with eye-rolling disdain. The key is in writing a combination of wit and pathos that only its greatest practitioners achieve (and not necessarily in every book): Lynne Graham, Sarah Morgan, Caitlin Crews, Kelly Hunter, Jennifer Hayward, Michelle Smart, the long-lost India Grey and Kate Hewitt, and now, Dani Collins. (I haven’t ventured into vintage HP territory, lest this post go on forever, but if you’re a fan, you know who they are.)

Collins’s Innocent possesses a perfect balance of pathos and wit, the uber-fantasy of a hero too good-looking, too wealthy, too potent, and too protective to be believable; the reader is assured the heroine will never suffer for material, emotional, or sexual want. The heroine, on the other hand, is an ordinary gal made extraordinary by her personal qualities and ability to move the hero’s heart (and other bits). Viktor and Rosalia are engaging characters. Rozalia, a blend of pragmatism and romanticism, humour, ability to fend for herself and take a moral stance against the hero’s money and power, is adorable. Viktor, as I’ve noted in recent HP heroes, while secretly concerned about Rozalia and needy for her emotionally, doesn’t come across as too insufferably commanding. No matter how much he wants to take over, he respects Rozalia.

Rozalia and Viktor are a rare breed in the HP because they are compatible. But Collins still has to give them a dark moment; this is where her romance falters. A lumbering old out-of-the-blue “thing” happens and Viktor turns cold and broody again. Heroine tears are shed, for Rozalia loves him. Viktor agonizes and frets till his road-to-Damascus realization of love for Rozalia comes about. Thank goodness it’s dispatched quickly. One final critique: not sure if it’ll work for other readers, but Collins’s love scenes are overblown (sorry, not sorry) fireworks, all mate-calling-to-mate ORNATE. They are baroque. On the other hand, I admired her unabashed embracing of purple prose. If it’s an HP, she owns it. With Miss Austen, we say Innocent’s Nine-Month Scandal offers “real comfort,” Emma.

Dani Collins’s Innocent’s Nine-Month Scandal is published by Harlequin Books. It releases today, March 19, and may be found at your preferred vendor. I received an e-ARC from Harlequin Books, via Netgalley.