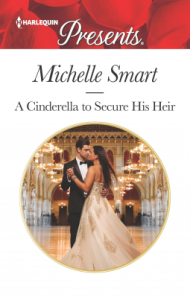 I’m enjoying Michelle Smart’s conceit in her latest HP series: “Cinderella” heroine and wealthy hero, especially because the Cinderella brings the “prince” to his feet. In Smart’s latest, A Cinderella To Secure His Heir, the Cinderella in question is 24-year-old Beth Hardingstone, a product of the foster system who made a career out of event planning. She has fallen on hard times, however, because she had to leave her job to care for baby Dom, entrusted to her after the death of best friend and fellow fosteree, Caroline Palvetti. Dom’s father, Domenico, also dead, in a motorcycle accident, is the hero’s, Alessio Palvetti’s, estranged older brother “RIP”.

When the novel opens, Alessio has deceived Beth into coming to Vienna, for quite a sum of money, to organize a Viennese ball for Alessio’s business partner and friend. Under the guise of working as Alessio’s assistant, Valente Cortada, aka Alessio himself, arranged for Beth’s job and transport, with baby Dom in tow. Thankfully, Valente reveals his identity pronto and moves to Phase 2 of his plan: threaten Beth with fighting her for Dom’s custody (a nebulous claim, but hey, it’s an HP and I’ll bypass laws and last wishes if I want to) unless she marry him.

Alessio is a workaholic, devoted, like all the Palvettis, except for Dominic Sr., to the success and expansion of their exclusive perfumery and jewelry empire. Family and a place in the family business mean everything. Alessio wants to claim Dom, groom him, as all Palvettis are, for a future in the business, and marry a competent, career-minded woman, who can easily integrate into the family ethos. With Beth, he can kills many birds: mommy for Dom, loyal employee for the Palvetti empire, sexy wife between the sheets. Possibly, Beth will refuse and leave Dom to Alessio. She doesn’t. Alessio is surprised at Beth’s love for and devotion to Dom and glad to have found a wife so motherly, sexy, and event-planner-extraordinaire.

In Smart’s usual and sympathetic insouciance, Alessio and Beth follow HP conventions, but on Smart’s terms. Beth may be a virgin, but I found her and Alessio’s wedding night tender and realistic, honest and trope-upending. Stars may burst and the earth may shake, but there’s a candour to Beth and Alessio’s conversation that I loved. I was also delightfully surprised at the work-home-life conflict that arose in Alessio and Beth’s young marriage. Alessio expected Beth to become a full partner in his business and, like his and his siblings’ childhoods, leave the child-rearing to nannies. I thought Beth’s holding out for work-life balance and her desire to spend time with Dom, to nurture and mother, made for a compelling conflict, which is, btw, organically and believably resolved because of who Alessio and Beth are.

Smart created a hero and heroine who are reasonable and thoughtful. They evolve in their relationship because they’re able to listen to the other, take in their point of view, admit when they’re wrong, and change. Alessio and Beth are still glamorous and sexy, but it’s not the most important thing about them or this HP. The glamor and luxury are trappings for two flawed, vulnerable people working out their relationship. Unfortunately, the dark moment arrives when Alessio turns himself into a sacrificial lamb without consulting Beth on whether she wants to partake of his particular feast of self-flagelation. Fortunately, Beth’s cooler head prevails — after she delivers Alessio a glorious dressing down.

I think Smart’s previous Cinderella, The Sicilian’s Bought Cinderella might out-good the present volume. There might’ve been more compelling development between the characters? Aislin and Dante might have been more vibrant? What I do know and can say is that Smart, whose only matches are Lynne Graham and Sarah Morgan in HP incarnation, is writing clever, funny, tender, and emotionally savvy romances, within a category too often rife with emotional shortcuts, cardboard cut-out characterization, and trite thematic treatment. With Miss Austen, we agree A Cinderella to Secure His Heir offers “a mind lively and at ease,” Emma.

Michelle Smart’s A Cinderella To Secure His Heir is published by Harlequin Books. It releases today, April 16, and may be found at your preferred vendor. I received an e-ARC from Harlequin Books, via Netgalley.