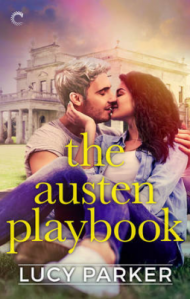 Lucy Parker writes one of my favourite contemporary romance series, “London Celebrities,” with heroes and heroines as denizens of London’s West End theatre scene. In the series’ fourth volume, however, the West End is in the background. Heroine-actress Freddy Carlton (for Frederica, a nod to Heyer?) joins the cast of a “digital mash-up of characters from different Jane Austen books, transplanted into a murder-mystery, house-party scenario. Outcome guided by the choice of the player,” that is, the televison and app audience. All taking take place on a estate, à la Downton Abbey. The estate, 16th-century Highbrook Wells, magnificent and crumbling, is the mortgaged-to-the-gills family home of acerbic theatre critic and Freddy nemesis, James “Griff” Ford-Griffin. Griff can’t afford to say no to the “digital mash-up” and the company of actors, Freddy too, arrives at Highbrook as if it’s Elsinore. Put Griff and Freddy together in this enforced intimacy and let sparks fly: antagonists to lovers, opposites-attract denying their attraction. Not really. This isn’t a criticism. Parker hasn’t written what at first appears to be your romance trope of antagonists-to-lovers. No matter how witty and thick the banter ( it is fabulous), Parker juggles three simultaneous narratives, of which the romance between Freddy and Griff is the gentlest, the most assured of a positive outcome.

In her varied narrative threads, Parker offers echoes of three of my favourite readerly things: the romance itself, opposites-attract in Griff, “grumpy, sexy cynic” and cheery, loving Freddy; secondly, many beloved Austen references; lastly, hugs-this-book-to-self, the channelling of the glorious A. S. Byatt double-narratived novel, Possession.

Griff and Freddy’s romantic arc develops beautifully from attraction to affection to I-can’t-breathe-without-you love. They’re open about their mutual attraction. ‘T’isn’t insta-lust; still, it’s powerful stuff lovingly tempered by a budding friendship. Parker has written two decent characters; no matter how different their demeanors, Freddy’s sunny to Griff’s dour, Freddy’s jauntiness to Griff’s stiff-upper-lip, they’re fundamentally caring, considerate, honest, and perceptive. Freddy and Griff’s encounters and banter are fun, but they also feel deeply, are loyal, and share a desire to do the right thing and right by others. Moreover, their love scenes are honest, funny, realistic, imperfect, not purple-prosed, aware of the other and most importantly, imbued with meaning and mutual consideration.

If Griff and Freddy get along so splendidly, what makes for the novel’s tension and conflict? Rather than situating the conflict between hero and heroine, Parker does another my-favourite-thing when she joins Griff and Freddy in solving a mystery. (Like the modern couple in Byatt’s Possession.) Conflict dogs Griff and Freddy in the form of their families. Freddy’s father, Rupert, is a man bent on making his daughter a “serious” actress, as opposed to the musical theatre and rom-coms Freddy prefers. Because Freddy is an affectionate type who wants to ensure her beloved people are happy, she’s gone along with her father’s plans. A confrontation looms if Freddy is to do what she loves. Griff, on the other hand, has two irresponsible parents, who’ve left the estate to rack and ruin. Since his university years, he’s scraped, invested, and worked hard to keep bailiff and bank at bay.

If there is one thing that causes rifts between Freddy and Griff, it’s Griff’s overprotectiveness, borne of taking care of his younger brother Charlie (who’s a wonderful, loveable character) and feckless parents. As a result of his care, love, and need to protect, Griff makes a few gaffes where Freddy’s concerned. Freddy is a breed of reasonable and easy-going that sees Griff’s generous intent despite his heavy-handed execution. She forgives him, without going ragey and weird as many heroines are wont to do in romances. Let’s face it, Griff is wonderful: caring, loving, funny, smart, sexy, and with a nose of adorable proportions. He is too used to loving and not used to being helped, or supported. All he has to do is give Freddy her due, which he readily does, with an apology, and she’s his forever. She is, his forever that is, by the end. And it’s glorious. Parker has written a romance about what keeps two people together. There are a few too many farcical shenanigans on the part of the acting company, but I can’t fault them when they made me laugh. There may be a few draggy bits. But I loved Griff and Freddy and Parker’s world is made of wit and love and people behaving well.

Lastly, Parker’s writing can be downright irresistible, especially, like her predecessor Heyer, in how she describes her characters’ physical attributes, how she makes them connect physically, and how she uses gesture to say things about them. In The Austen Playbook, she’s surpassed herself with Griff, deliciously sexy, icy Griff. Freddy, soft, round, “exuberant” as Griff says of her, describes Griff as “the walking ice cube,”; his “inkwell eyes”. When Freddy sees Griff at the estate for the first time: “And, standing on a ladder, one of her very favourite things in the world, a handsome man nailing stuff.” Freddy notes Griff’s sang-froid as “there wasn’t a bead of sweat on him. The assassin persona was firmly in place. Suave, efficient movements, immaculate clothing. and not a hint as to what was going on beneath the surface,” except one slight tic, “the pools-of-mystery eyes narrowed.”

Griff’s cool control is only a cover for his physical and emotional care and protectiveness. This shows in what he does more than what he says, though he says cool, romantic stuff. Freddy is given to where-angels-fear-to-tread moments and Griff takes care of her: “Firmly, he removed the mystery tool from her grasp before she could follow through on her impulse to test the sharpness of the blades with her thumb” and “Coolly, he steered her around the extension cord some idiot had left on the grass, before she could stand on the plug.” Lest you think only Griff comes under Freddy love-scrutiny, Griff characterizes Freddy too: “She was adept at producing that guileless look endemic among fictional princesses and children’s entertainers.” One of my favourite chin-lift passages EVAH: “He looked up suddenly from his papers and their eyes met. And suddenly her mouth felt dry, and she was very aware of her heartbeat, thudding a bit too hard against the wall of her chest. Ever so slightly, his eyes narrowed. Just a little, her chin lifted.” The rest, my reader-friends, is as marvelous and awaiting your delectation. With Miss Austen, paid homage in Parker’s title, we say The Austen Playbook is proof “there is no charm equal to tenderness of heart,” Emma.

Lucy Parker’s The Austen Playbook is published by Carina Press. It releases today April 22 and may be found at your preferred vendor. I received an e-ARC from Carina Press, via Netgalley.