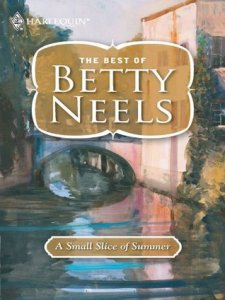 For those of you who may have followed along on GR, or Twitter, you know I’ve set out to read the Betty Neels oeuvre, all 134 romances. I’ve alternated between posting short reviews on GR, or commenting #greatbettyread on Twitter. Henceforth, I’ll be posting tiny reviews on the blog, keeping a record of my reading in one place. Plus I prefer its freedom of babbling as I see fit without Twitter constraints, or the fuss of keeping one set of reading thoughts in one place and others in another.

And so, my reading of #27, A Small Slice Of Summer (1975), mainly done in the tub, as most of these are: a good soak and Betty, there’s nothing like it. I enjoyed Slice of Summer, finding nothing atypical about its Betty-fare (why one reads them, no?), but it didn’t rock my world as others have. Nurse Letitia Marsden ends up in Dr. Jason Mourik van Nie’s world by association: her older sister is friend’s with the wife of a doctor-colleague of Jason’s. Their paths cross socially and professionally and proximity is further ensured when Georgina asks Letitia to take their absent nanny’s place when she, husband Julius, toddler Polly, and baby Ivo, visit Holland. BTW, the subtly match-making Georgina and Julius, are the fantabulous Damsel In Green (1971)’s hero and heroine.

I wasn’t keen on Slice because there didn’t seem much reason for these two to stay apart. Though when Jason pulls a Darcy-like proposal, I understood why Letitia rejected the dunderhead. There was also one scene involving Jason and Letitia rescuing a group of encamped Roma people who’d taken ill that bordered on questionable, definitely of its time, though not overtly offensive. That set a certain moue of disappointment for me and I never managed to shake it off.

On the other hand, there are some absolutely marvelous bits that explain why Betty is so beloved, including yours truly. Firstly, the hero does run the heroine over with his car, a mere ankle injury, mind you. It does ensure that he gets to carry her around and arrange for her convalescence, being kindly officious and total care-taker fuzzy warm. Moreover, there’s another, much better, rescue scene where Julius and Letitia work together to foil a bull from stomping on Georgina and Polly!

The reason for the Betty love is in the details, not the repetitive tropes. Our love for Betty is in the execution. Here’s one example from A Small Slice Of Summer of why I love her so. Letitia is walking near her parents’ country home:

She paused to watch a blackbird, and when it flew away whistled to it. The answering whistle wasn’t one that any ornithologist would mistake for a genuine bird call, and Leticia turned around to see who it was. Jason, coming towards her.

Who else can marry the natural world’s beauty, a lonely, plain girl walking in the countryside, and one heart responding to another in three lovely sentences?