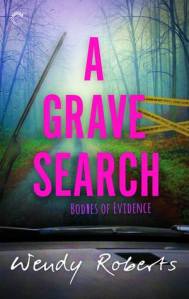 I’m loving these two contemporary murder mystery series I’m following. I don’t look forward to the day I can only await the next book rather than my present glom of Griffiths’s Ruth Galloway mysteries and Wendy Roberts’s Bodies of Evidence. I finished #2, A Grave Search, today. The Roberts series, unlike Griffiths’s, has a healthy dose of an ongoing romance, which I’m especially enjoying.

Roberts’s heroine, Julie Hall, aka Delma Arsenault, has the power to find dead bodies with dowsing, or divining rods. In book #1, Julie’s supernatural abilities took her into the dark heart of her childhood and ended on a note of high, painful drama. Book #2 sees further resolution to the drama, but also greater peace and yes, even happiness, for Julie-Delma. In Book #1, her romance with older-man and FBI agent, Garrett Pierce, had the desperation of two unhappy, tragic people finding solace in each other. But Book #2 finds Julie and Garrett with an ironed-out relationship, still sexy and bantery, still an overprotective Garrett to a where-angels-fear-to-tread Julie, but they feel like a solid couple, past the first throes of getting to know each other (though the sexy still burns bright).

A Grave Search‘s opening finds a semi-healed Julie and her ever-faithful Rottweiler, Wookie, move out of Garrett’s Seattle condo for a place in the country an hour out of town. Julie has started her own business, Divine Reunions, helping families locate the bodies of their loved ones and achieve peace and closure. She still works closely with the police, though the case she’s involved in in this volume doesn’t intersect with one of Garrett’s. Ebba Johansson contacts Julie for help finding her daughter’s, Ava’s, body. Ava was kidnapped and held for ransom. A lot of blood was found at the scene where her ex-boyfriend murdered her, but the body was never been located. Julie is hesitant to take the job because Ava’s ex-boyfriend was one Ron Low, a young man Julie went to high school with. Any proximity to her home-town and its denizens serves to elicit painful, difficult memories. But Julie’s natural curiosity and sympathy for the families of missing people sees her take the case. As indicated by the blurb, the case means another personal reckoning for Julie, but I can assure you, it ends on a lovely HEA.

As with all the murder mystery series I follow, if the main characters and narrative features capture me, the author has made a fan for life. There are several elements to Roberts’s series that I love and first and foremost are Julie, intrepid, vulnerable Julie, and stoic, strong, rational Garrett, who make a great team and are sexy as heck together. Wookie is also a hoot! Moreover, there’s Julie’s voice. Roberts’s series has a first-person narration and those qualities of strength, goodness, and vulnerability, with a good dose of humour, come across beautifully. I love following along on Julie’s compelling, dangerous adventures, especially as they’re coupled with her personal journey dealing with childhood and recent trauma, her strange powers, and her struggle with alcoholism. I love that Julie has a banterish, but positive relationship with a therapist and an equally banterish, loving relationship with Garrett. Unlike the previous volume, I thought the suspense story was less melodramatic and way up a notch on plausibility (even though I did, again, guess the whodunnit, but I don’t mind).

There’s a sarcastic tone to Julie’s voice and humour to her relationships that mitigate the personal tragedies and true evil or twistedness that she and Garrett witness and prevent, or redress, as far as their powers of mysticism and reason take them. There’s a good measure of comic relief: Wookie’s always good for a laugh. Roberts gives us some strong scenes: Julie wakes up one morning to found Garrett installing security cameras all over her house. Their text and emoji banter over the bunnies and spider webs that disturb the cameras are hilarious, but they also show two people who care about each other. Roberts does a great job of showing how Julie’s life, after trauma, is normalizing: the ordinariness of her life, her relationship, despite the few reckonings still left to be resolved by the end, make for a lighter tone — despite the darkness and sadness of this particular case. Julie even makes a friend who, unlike the first book, isn’t toxic. Tracey’s a nutbar, but harmless and affectionate. Only two books left for me to await the next and I haz sad, but I’m certainly looking forward to A Grave Peril! 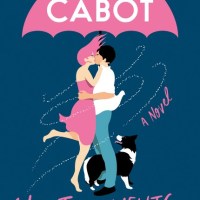 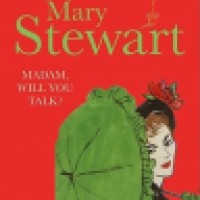 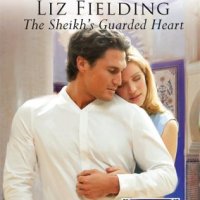