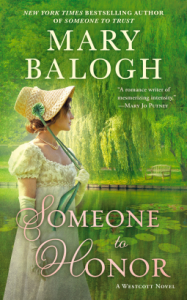 It is good to be in Mary-Balogh-world again (and apropos to reading-pair her with Betty Neels; see my previous review on The Moon For Lavinia): a world of grace, depth, and beauty, brought like a well-sprung carriage to a believable HEA-conclusion. I haven’t read the Westcott series before, but was over the moon, Lavinia’s, to read and review Someone To Honor (Wescott #6); it tropishly-ideal marriage-of-convenience narrative was mere icing on the Balogh-wedding-fruitcake.

No one can write deeply-felt, quiet characters, somewhat melancholic, like Balogh can and Someone To Honor‘s Abigail Westcott and Lieutenant-Colonel Gilbert Bennington, “Gil,” are so. Someone To Honor is more Gil’s story than Abigail, but Abigail is the key to Gil’s changes. Gil experiences the greatest inner changes; yet Abigail too finds closure in all that she has realized in the past six years. They’re ideal for each other, but marry for pragmatic purposes with a dose of strong physical attraction, typical to Balogh.

We meet Gil as he accompanies Abigail’s brother, Major Harry Westcott, home to England, Hampshire to be exact, to Harry’s estate, Hinsford Manor. There, Gil will see that Harry absorbs fresh air, mild exercice, and wholesome fare to help his healing from war wounds. Gil sees his time with Harry as a duty towards a junior officer, with a strong liking thrown in, and an opportunity for respite and regroupment before the domestic battle he was set for himself: to get his daughter, Katy, back from her aristocratic grandparents, who view his humble origins, as the ” … bastard son of a blacksmith’s daughter … “, no matter his military might and honor, as beneath their family. But Gil’s wife, Caroline, is long dead and he wants his toddler-girl back. He’s hired a lawyer and set a custody battle in motion.

When we meet Gil and Abigail (following the Westcotts’ arrival at Hinsford) a place Gil hoped to enjoy solitude and daily walks with his canine beast, Beauty, they are pensive, melancholic characters. Gil is broody over his custody battle: ” … he felt only weariness, irritation, and a heavy foreboding that coming home was not going to bring happily-ever-after with it.” Abigail, as I assume we learned from previous books, is only now fully at peace with the discovery, six years ago, that she and her brother, Harry, were the illegitimate offspring of her mother and father, RIP, who had “married” her mother while married to someone else. The interactions and relationships are sundry and made me sorry I hadn’t read the previous books. Suffice to say, the Westcotts are generous and open-hearted and, legitimate and illegitimate, fortune and favour, are shared amongst all. They present a united, loving front to the world and live it day-to-day. But Gil, no matter how warm and friendly the Westcotts are, isn’t at ease: “He did not feel comfortable in aristocratic company. Despite his senior military rank, he was in reality a nobody from nowhere and as illegitimate as Harry. A gutter rat … “

Gil and Abigail’s meet-cute is delicious. Everyone behaves so well, but Abigail sees Gil, sans shirt, chopping wood, and assumes he’s an estate worker. She chides him for his undress before a lady and from thereon, they’re at zingy verbal loggerheads. Abigail’s response is complex: she’s hoity-toity, but attracted too: “He looked like a fearfully dangerous man. Primitive. Magnificent. He was all raw masculinity. Abigail felt herself shudder inwardly.” Gil and Abigail are too compatible, as well as sharing a sense of having been socially shamed, to carry on in this manner. Before long, they’re genuinely and deeply conversing: with Gil telling Abigail about his custody battle and despair at fighting his powerful former in-laws. Abigail too shares her feelings of how and why she came to accept what to her looks like a life of solitude and contentment. She doesn’t want to take part in her family’s urgings to rejoin society, no matter how they rally around her: “For the Westcotts did nothing as well as they rallied.”

Gil and Abigail are solitary, introspective people. They’re introverts: would rather read and take walks than socialize. In sum, perfect for each other. When Gil’s lawyer suggests he present a respectable stepmother for Katy in court, augmenting his chances of winning his suit, Harry plays a lovely devil’s-advocate matchmaker: Gil and Abigail marry “for convenience” to help Gil win his suit. Famous last words in romance. There are currents: of physical attraction, liking, affection, connection … in other words, Gil and Abigail are in love and the only people who don’t realize it are Gil and Abigail.

Balogh’s notion of love is one that is in keeping with mine. Love cracks people open and brings them to a vulnerable, exposed place. Her characters are often settled in their ways, content, a little sad maybe, but their lives are ordered. They often see the vista of the years before them with contentment, unchanging, resolved. They balk at the idea of being in love, as simply, beautifully evidenced by “She was not the love of his heart” and “She did not want to be in love with him.”  Balogh’s hero and heroine often come to love slowly, but well. Love is a not a road to Damascus revelation, but an awakening from a long, peaceful sleep to an alertness of heightened being. It is so for Gil and Abigail. There is drama, the court battle, humour (the judge is an absolute HOOT!), and there is love … and a little girl who gets a papa and new mama. Balogh’s Someone To Honour, except for the plethora of confusing, droll and lovely as they are, Westcotts, is perfect. With Miss Austen, we say Someone To Honor, contains “no charm equal to tenderness of heart,” Emma.

Mary Balogh’s Someone To Honor is a Jove Book, published by Berkley. It was released on July 2nd and may be found at your preferred vendors. I received an e-ARC from Jove/Berkley, via Netgalley.

27 thoughts on “REVIEW: Mary Balogh’s SOMEONE TO HONOR”