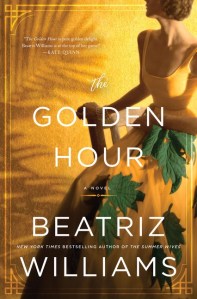 “I damned well won’t run around Nassau going to parties while my husband rots away in the middle of Nazi Germany.”

Beatriz Williams’s irrepressible heroine declares early in The Golden Hour and sets the tone and theme of a story spanning continents, political interests, and historical whirlwinds, but centering on love for the ages, love of country and of a man for a woman. Through two wars, intrigue, evil, characters buoy above history’s indifferent, raging waters. Williams writes about pre-Great-War Elfriede, a German beauty married to a German baron, who’s sent to a Swiss asylum to recover from what we’d recognize as post-partum depression. There, she meets the love of her life, a recovering British army officer, Wilfred Thorpe. And Lulu, a seemingly amoral American lady-columnist, adrift in 1940s Nassau, embroiled in the goings-on surrounding the cadaverously odious Windsors.

Though work left me only a reader’s lament of two to three pages of reading before nightly-stupor set in, Williams’s tale had me in thrall for weeks, working its magic to carry me, amidst teacherly tasks, to a golden-light-bathed crescendo of an HEA-conclusion.

And yet, it is such a dark tale, save the final few chapters … were it not for the love and devotion its two female and two male protagonists have for each other, while never rescinding the patriotism and honour the troubled times demand of them.

On the plane ride to Nassau, Lulu meets Englishman Benedict Thorpe, large, beautiful, and gingery. He comes in and out of her life like the golden light that washes the island before the sunset. His mission? Nothing less than king and country … soldier, spy, and head over heels in love with Lulu. Meanwhile, Lulu’s own history is dark, difficult, and rife with abuse and neglect. Nevertheless, she’s irrepressible; at first, implicated in the Windsors’ nefarious machinations and connections, Lulu flexes an ethical muscle as she falls more and more deeply in love with Benedict.

Williams alternates Lulu’s narrative in 1940s Nassau to her mission to recover her husband from a Nazi jail with Elfriede’s, as she returns to husband and homeland, never losing sight of Wilfred as letters are exchanged and circumstances bring them together again. Then, the Great War tears Elfriede and Wilfred apart. Without spoiling the novel for any readers, the primary thread of the two couples’ lives is this coming together in desperate love and being torn apart by war and betrayal. Williams’s novel reminded me of another great war-spy-love-story I read this summer (with the luxury of long, indulgent reading-spells), Kate Quinn’s The Alice Network. Like Quinn and her double-narrative, Williams brings her narrative threads together to a magnificent close, upholding the idea that love and goodness sustain and steer the human ship. There is tragedy and sadness and lives made shabby by war and want, but, in the end, the “golden hour,” which Wilfred, Elfriede’s great love, says, “when everything looks the most beautiful,” is the novel’s final vision and a magnificent one it is, a generational HEA. With Miss Austen, we concur that Williams’s Golden Hour contains “no charm equal to tenderness of heart,” Emma.

Beatriz Williams’s The Golden Hour is published by William Morrow. It was released on July 9th and may be found at your preferred vendor. I received an e-ARC from William Morrow, via Edelweiss+.