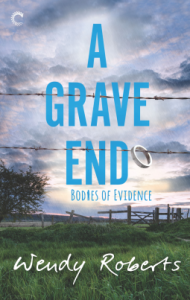 Wendy Roberts’s fourth Bodies of Evidence mystery finds our heroine and psychic body-finder caught between her past and future, as she has been for the past three books. Without spoiling the series if you’ve yet to read it, heroine Julie Hall uses “dowsing rods” to find missing, deceased people, bringing closure to their families and, more often than not, helping the police solve cold cases. Set in moody-broody Washington state, our Julie is a trailer park gal with supernatural abilities, an up-close-and-personal relationship with beer and wine, and a past as haunting and painful as the murderous circumstances of the bodies she discovers. In each volume, Julie tries to make peace with her abusive past, fend off dipsomania, and draw comfort from a life she’s forged with will power, the wisdom of a great therapist, and the love of her twenty-years-senior FBI-agent boyfriend (I know, but it totally works).

In Grave End, Julie is haunted by a more recent memory, which plagues her throughout her latest case, but is happily resolved in her and Garrett’s favour. To start, she’s called by a con, Roscoe Ebert, to find the body of his murdered wife (even while he sits in prison, convicted of that very murder). Don’t worry there’s sufficient evidence that put him there, but the body may help prove his innocence. Though the case takes Julie back to her rife-with-bad-memories home town of Blaine, she takes it because her memory of Roscoe’s murdered wife recalls her own childhood suffering. If she can bring the family and the lost woman some peace, then maybe she too can put Blaine and its painful memories behind once and for all.

In the meanwhile, thanks to three-books-worth of therapy and love, Roberts hasn’t allowed her heroine to languish in suffering-memories angst. She’s brought Julie quite nicely to have things in her life we couldn’t imagine in the first book: a best friend, a loving, protective, loyal, stalwart man, and even a companion for her big-headed doofus dog, Wookie, in the form of a cutie-pie kitty named Fluffy. Julie is domestic where she was untethered, grounded in love and friendship where she was lonely and cynical. But her struggles with the bottle and self-doubt continue … until Grave End‘s conclusion.

I can’t say I loved Grave End the way I did the previous books. The premise was intriguing enough, but the resolution, the “murderer” reveal, I saw that coming pages and pages away. (The villain is an utter caricature and the portrayal of mental illness is, once again, associated with violent behaviour. Roberts had me shaking my head and muttering, “I wish you hadn’t done that.”) I also miss how incredibly sexy Julie and Garrett are, but Grave End is strictly closed-bedroom-door, which is too bad because Roberts sure can write a love scene.

What I do still love about the series?: how much I care about Julie, her BFF, Tracey, Wookie and Fluffy, and devoted, loving Garrett. Roberts finally brings a hard-won peace for Julie, steering her away from suffering memories and struggles with the bottle, to a place of great change and joy with Garrett, the pets, and a best friend’s love. As for Julie’s psychic dowsing rods, they’re left to dowse another day. I can’t tell whether Roberts is bringing her series to a natural HEA-end, or preparing Julie and Garrett for the next stage of their sleuthing? Either way, I would love to page-meet them again. With Miss Austen, we’d say A Grave End offers “real comfort,” Emma.

Wendy Roberts’s A Grave End is published by Carina Press. It was released on July 15 and may be found at your favourite e-vendor. I received an e-ARC from Carina Press, via Netgalley. 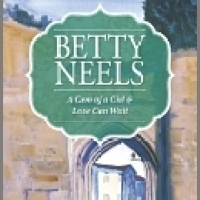 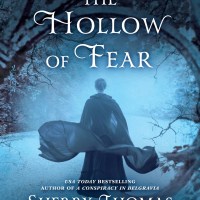 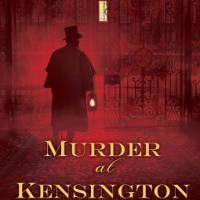 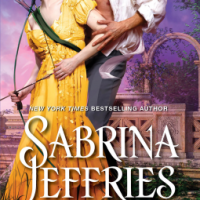 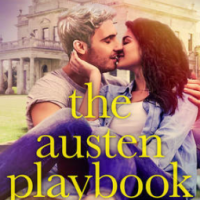