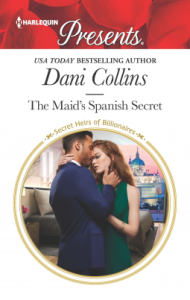 After a work-week from hell, a well-done HP is exactly what can set the mood right and tilt the world back towards HEA in one intense, short take. Dani Collins, a fellow-Canuck, is becoming one of my favourite HP authors. With category romance out of its Golden Age, and taking one step forward and two back trying to remake itself, the good ole HP, as practised by Collins, Smart, Hayward, maybe Hewitt, still stands sentinel to the category virtues.

On a European vacation, Poppy Harris, aspiring photographer, loses her money and takes a job as a maid for a Spanish billionaire’s mother. Said billionaire, Rico Montero, the day his arranged-marriage fiancée breaks their engagement, gives in to the attraction he’s had for the maid and the maid for him and they make passionate love in the solarium.

A year and a half, one broken engagement, and one dead cheating ex-fiancée later, Rico unearths Poppy and daughter, Lily, living in Saskatchewan with Poppy’s grand-mother. He shows up for a why-didn’t-you-tell-me-I-had-a-daughter showdown, lays down the HP “You must marry me” stricture, and seals his heart’s fate. Strictly a marriage-of-convenience for the strictly-rational Rico and, for Poppy, a hoped-for father for Lily and opportunity to be with the man she’s never forgotten, or replaced in heart, mind, or body.

All the HP trappings in a package uniquely Collins’s: who loves a dichotomy of rational-hero (not in touch with the feels) and all-feels-heroine, spilling over, brimming, simmering, boiling, and exploding. The love scenes are baroque; the arguments, a maelstrom. Rico is overwhelmed by affection, care, protectiveness and he fights the feels; Poppy won’t settle for anything less that being loved inconveniently, no matter how conveniently she wed. Lily is cute as a button and Collins sure can write a great scene and couple it with wonderful dialogue/banter.

Unlike many romance authors, who focus on too many internal musings, Collins sets scenes and beautifully contextualizes the budding relationship within them: there is a framing device! (music to an English major’s heart) set during Northern Lights’s magnificence and two wonderful scenes set on vacation in Thailand, with one of the two serving as the romance’s “dark moment,” which doesn’t involve a Big Mis, or OW, but Rico’s realization of his love for Poppy (everyone’s a goner for Lily pretty much from the get-go).

Moreover, Collins delights with metaphor. Who can resist man-scent metaphor: “His boots were alligator, his cologne nothing but crisp, snow-scented air and fuming suspicion.” Who can resist heroine-chin-defiance coupled with hero-heart-effect simile: “Poppy lifted her chin and pretended her heart wasn’t whirling like a Prairie tornado in her chest.” And my favourite, primal pupils: “His pupils were huge. Atavistic. Skeptical” Collins’s Maid’s Spanish Secret is a blast, fun, funny, and ornately written. In turn, I was immersed in and moved by Rico and Poppy’s journey to their HEA. I don’t read as many HPs as I used to, but I’ll always read a Collins. And if you read one this year, make it The Maid’s Spanish Secret.

Dani Collins’s The Maid’s Spanish Secret is published by Harlequin Books. It released on July 16 and may be found at your preferred vendors. I received an e-galley from Harlequin, via Netgalley.