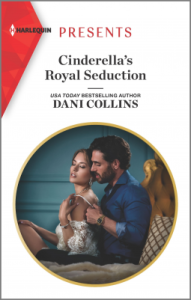 Dani Collins’s Cinderella’s Royal Seduction is a fairy-tale retelling with a heroine replete with temper and a prince who exhibits alpha-diminishing humility. I loved it. It’s funny, heartfelt, and possessed of baroque love scenes. The HP’s connection to fairy tale is well recorded; so much so that I was afraid, on first opening Cinderella’s Royal Seduction, it would be trite, tired, formulaic. What I found was anything but. It was delightful, fun, fresh. Much of this may be attributed to Collins’s heroine and hero characterization and how it allows the narrative to subsume the fairy tale, instead of being ruled by it.

Cassiopeia “Sopi” (the worst thing about the novel is the poor heroine’s diminutive) Brodeur is at the housekeeping beck and call of her evil stepmother and sisters at Lonely Lake Spa in the Canadian Rockies, once her beloved mother’s business-child. Though run-down and in constant need of repair, it’s beautifully situated and lovingly cared for by Sopi. Her evil stepmother machinates a visit from Rhys Charlemaine, Prince of Verina, second-in-line to the throne and, unbeknownst to nasty stepmom, horrid daughters, and Sopi herself, due to his brother’s, the king’s, cancer diagnosis, in need of a wife to provide the stability of an heir to their kingdom.

The first night of his visit, Rhys, in all his muscled birthday-suit glory, swims in the deserted spa pool. Sopi, eyes wide with wonder at his beauty, is hidden by the towel rack, amazed she “had not only seen their special guest, the prince of Verina, in a private moment. She’d seen the crown jewels.” This is how Collins wins you over, with wit and chuckles.

The next day, Sopi must take over the masseur’s job when Karl rushes off to his now-birthing wife. The ensuing scene is cracking good fun, sexy, banterish, wonderful. Collins even manages to sneak a contemporary reference to the magical slipper in Sopi’s bedazzled pedicure. With the cares of the kingdom squarely on his tense, capable shoulders, Rhys’s attraction to and liking of Sopi’s firmly masseusing hands, permeates the scene with humour and sensuality:

“You haven’t.” He closed his eyes in pleasure-pain. “This is the best massage of my life. I have to cut it short before it turns into something else.” He thought he heard a small “Eep.” He definitely heard her swallow. “Stay mean,” he growled.

Guffaw from me at Rhys’s “stay mean”! Cinderella’s Royal Seduction maintains this splendid level of fun and never rescinds on the pathos so necessary to good romance.

Oh, there are emotional impediments to this engagement-of-convenience romance, especially on Rhys’s part, but Collins’s reins remain on her magnificent narrative, steering with humour, heartfelt relationship growth, elaborate fireworks-worthy love scenes and the true overcoming of emotional blocks to love and commitment. If you’re an HP fan, you’ll love this; if you’re not, then, it’ll make you one. With Miss Austen, we found in Cinderella’s Royal Seduction “a mind lively and at ease,” Emma.

Dani Collins’s Cinderella’s Royal Seduction is published by Harlequin Books. It was released in January and may be found at your preferred vendors. I received an e-galley from Harlequin, via Netgalley.