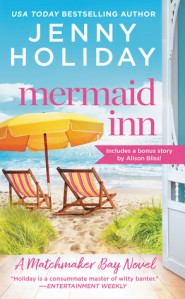 When I first started this blog, I was reading romance exclusively. Now, I balance romance with crime and nonfiction, and the occasional classic, or litfic. I like the variety and I tend to have three books going at the same time. I’ve been thinking about what I get from each genre, but mainly been focussing on romance and what it offers a reader, especially because I think it is still maligned in many quarters. There is no one better to show the romance genre’s virtues than Jenny Holiday, one of the masters of contemporary romance. The blend of humour, character growth, and the delightful journey to commitment for her two protagonists are perfectly executed. Though they’re unique, I find similar joy in reading Lucy Parker. The present Holiday volume I consumed, Mermaid Inn, first in the Matchmaker Bay series, adds a magical Canadian small-town setting to the Holiday trail-mix of goodness. In a pandemic panic, I’ll often wake up in the wee hours and reach for a romance to keep the ghosties away. Mermaid Inn kept me company the past three nights and I brought it to a final-page flip this AM with a satisfied sigh.

Eve Abbott reluctantly returns to Moonflower Bay, Ontario, when her Great-Aunt Lucille leaves her the Mermaid Inn. Lucille’s will stipulates Eve must remain in Moonflower Bay for a year before she can sell the inn and return to Toronto. Eve decides to renovate the inn, put it up for sale, and get out of Dodge, avoiding above all, Sawyer Collins, chief of police and the blue-eyed cause of her teen-age heartache.

Eve’s parents sent her to Moonflower Bay in the summer while they worked in Toronto. There, she watched films and enjoyed Lucille’s eccentricity. She fell in love, with Sawyer, and he was her first lover … until she saw him kissing another girl atop a float in the annual Mermaid Parade. Eve never returned to Moonflower Bay after that, going to UofT, grad school, and now up for a dream job as a collections developper librarian. Her plan is to sell the inn and pay off her student debt. Her first day back, however, finds her atop the inn’s roof while “someone” absconds with the ladder (Moonflower aka Matchmaker Bay because of the matchmaking tendencies of its older population; Sawyer and Eve are often the beneficiaries of their efforts). Who comes to the rescue other than the chief of police and former teen heartache, Sawyer.

Sawyer had reasons why he made sure Eve left Moonflower never to return. Sawyer is a stand-in for the best of the self-sacrificing heroines; really, Betty Neels could have written him as a waif-heroine. Taking sole custody of his then eight-year-old sister to escape their abusive father, Sawyer knew Eve would sacrifice university to stay with him and Clara in Moonflower Bay. Now, still in love with Eve, he wants to help her achieve her inn-goals and be her friend. Eve is furious with Sawyer, but his good-guy tendencies and laser-blue eyes weaken her resolve. “Not not friends” truce turns to friends turns to friends with benefits … which, as we know if we read enough romance, the heart already knows what the body demands, love.

If you love contemporary small-town romance, you’re going to enjoy Holiday’s Mermaid Inn for its familiar touches: funny denizens, stern, loving, protector-hero, the heroine’s funny side-kick friend (Maya, the town’s theatrical entrepreneur, whom I loved, btw), small-town eccentricity and community-feels, the bar/café, etc., with cute names, and the trio of male friends the hero is a part of (sequel-bait).

But there are things Holiday does that are uniquely her own and twist that small-town romance ethos. I loved them. First, Sawyer is a stern, good, funny, and protective as heck, towards Eve and his baby sister Clara (a great character in and of herself). He’s also an emotional wreck. He gets choked up, feels the pangs of empty nest pain when Clara goes to TO for university, and fights back tears when he has to say good-bye. He’s a mess and Eve gets to take care of him. Eve, on the other hand, isn’t much for expressing her emotions, but I loved how Sawyer was and is her weakness, especially in those funny moments when her stern head says one thing and her mouth says another, softer, more loving.

Holiday, however, shows wonderful growth for Eve: giving her a stronger and stronger voice about telling Sawyer what she needs and wants. This translates best in Holiday’s love scenes: adult Sawyer and Eve renegotiate needs and wants and shed teenage tics. I thought the love scenes were some of the novel’s strongest and a great lesson in how to write them and why they’re essential to the romance novel. They showed character and relationship growth. Moreover, how relationships evolve and can be enriching if characters talk to each other were important to Sawyer and Eve, as well as Sawyer to his sister, Eve to her new friend, Maya. And, I love how Holiday, with a nod to female friendship, which romance novels do well more often these days, showed a great dynamic among Sawyer’s friend-group, Jake and Law (glad to see Jake will get his own story in Paradise Cove). Mermaid Inn is a great start to what will prove to be a great series. With Miss Austen, we say Holiday’s Mermaid Inn offers “a mind lively and at ease,” Emma.

Jenny Holiday’s Mermaid Inn is published by Forever Romance. It was released in January and you will do well to get yourself a copy. I received a copy from the publisher.