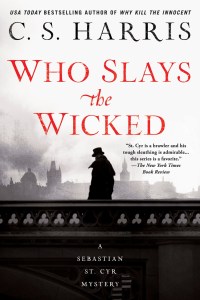 I hoard C. S. Harris’s Regency-set St. Cyr mysteries like a squirrel her winter-nut-stash. But every time, when I have time off, I crack one open to enjoy without interruption. Given it’s a pandemic-summer and stay-home is still the best way to go, I’m happy to say I have TWO St. Cyrs to enjoy! Number fourteen sees Sebastian St. Cyr and wife Hero’s sleuthing hit close to home as Sebastian investigates the murder of his beloved niece’s husband, Lord Ashworth, dissipated, privileged, arrogant, and, as Sebastian suspects, a murderer and defiler of women and children. No one will mourn Ashworth, least of all his wife, Stephanie, who suffered at his hands, but his murder becomes personal when Stephanie is suspected. Like all of Harris’s St. Cyr mysteries, it’s a wild ride: a Russian delegation arrives in London to foil the Anglo-Dutch alliance sprung out of Napoléon’s dwindling/defunct powers. Russian and English nobles, London’s poor and destitute, one notch above-impoverishment servant class mix and mingle in Sebastian and wife’s, Hero’s, attempts to discover who killed the vicious Lord Ashworth. The narrative moves towards a confrontation between Sebastian, with his preternatural detecting powers, and evil. There is, in this volume, evil in Biblical proportions and Seb, more than ever, aware of human frailty, as the people he loves are caught in Ashworth’s depraved vortex.

With this fourteenth volume in Harris’s series, we see a Sebastian of maturity and depth. His youthful follies and mistaken loves, even his anger, are now channelled into an ever-growing desire to right social wrongs and exact justice for the vulnerable. This is largely due to Seb’s contentment with Hero and their son, Simon. Seb is a happily married man, with a deep commitment to a woman who is his match in every way, intellectually, physically, whose values and beliefs are in tandem with his, with a streak of impressive independence (that he respects and never crowds). All his questions of identity and youthful angst-fest with actress-lover Kat Boleyn (with whom he now shares a believable, lovely friendship) flow outward to making his world and time serve justice, on the basis of decency and conscience.

I don’t read Harris’s St. Cyr mysteries for the unravelling of the plot, or solution to the mystery (indeed, for the first time, I guessed whodunnit and why), but for the characterization, relationships, especially Seb and Hero’s, and historical rendering.

One of Harris’s great strengths is how she fashioned a detecting figure who is alpha-bad-guy-defeating and emotionally sensitive. Sebastian never suppresses feelings; he feels the feels and channels them towards justice. As a new father and loving husband (he and Hero, at this point, have been married for two years), he is both content and attuned to life’s vulnerabilities, especially given his love for Hero and Simon:

… she was still a wonder to him. She’d come into his life at a particularly dark period, when he’d lost, first, the woman he’d loved for years, and then his own sense of who and what he was. Now he couldn’t imagine his world without her. Sometimes in the haunted darkness of the night, the fear of losing her or their young son, Simon, could come upon him out of nowhere with a ferocity that took his breath and scared the hell out of him.

This sense of life’s precariousness and the precious gift of love and family Seb possesses extend to his sense of the injustice of victims deprived of them. Sebastian’s twin feelings outside of his family happiness are sorrow and righteous anger. This makes him a most attractive hero, indeed. Considering one of Ashworth’s victims, Sebastian thinks: “Looking at her, Sebastian felt a surge of sadness mixed with rage — rage at men like Ashworth, whose wealth and privilege enabled them to careen through the world, taking what they wanted, utterly heedless of the lives they were destroying in the process. Rage at the society that allowed such things to happen. Rage at the senselessness of it all”. Sebastian’s emotional depth is keenly aware of social injustice and existential mystery. He cannot answer, to his satisfaction, the latter, so he grapples with the former.

Sebastian and Hero share warmth, attraction, affection, tenderness, LOVE; they like and respect each other. Each, in their own way, are fighting injustice; this makes for a great partnership beyond domesticity and parenthood. While Sebastian pursues justice for the oppressed, Hero writes about it. She researches and writes newspaper pieces about London’s poor, via a series of interviews. Her journalistic skills and street-level connections marry, pun intended, beautifully with Sebastian’s military skills and make them a formidable pair. They’re joined by a deep fellow-feeling for society’s vulnerable, the forgotten people. Here is Hero, in a masterful scene, interviewing a woman who collects dog feces for a living; after two happy marriages and children, this poor woman has been reduced to this. Hero’s reaction is similar to Seb’s: “Hero stared across the street to where a new row of low brick buildings had recently replaced the old, burned-out warehouse that once stood there. She found she had to swallow several times before she could keep going.” Like Sebastian, Hero meets London’s street-people in their humanity, pathos, hopes, dreams, and most importantly, losses. Their joint-yet-separate ventures into justice for the oppressed makes them even more lovable as individuals and a couple.

Harris has brought her characters to a profound place by giving them a happy marriage, joy in each other and their son, where they can continue to redress society’s wrongs. I particularly loved one scene where Seb is speaking with his friend, the opium-addicted, Irish former-military doctor, Paul Gibson:

“You all right?” asked Gibson, watching him through narrowed eyes.

… ” … What the bloody hell is wrong with us? What kind of society turns its back on the neediest among them?” He flung his arm through the air in a sweeping motion that took in the awakening city. “They call themselves Christians; they smugly go to church every Sunday and pat themselves on the back for being so damned holy. And then they allow this?”

Sebastian turned to look again at the dead child prostitute. … lost in a swirl of frustration and fear.

Domestic happiness, the romance-HEA, stands in juxtaposition to a society of injustice and inequality, a government foolish, negligent, indulgent, and concerned solely with preserving privilege and wealth, and provides the perfect backdrop to two decent, at times tormented (Sebastian, not Hero), moved by plight and powerful enough to do something about it. The series looks like it may have found its rhythm for a long time and I would be happy to follow along as long as Harris graces us with Seb, Hero, and Simon, the magistrate, Lovejoy, the earl, Hendon, Paul Gibson and his French lover, Alexi Sauvage (we don’t see enough of her in this volume). Another great addition to a great series, with Miss Austen, we say, “a mind lively and at ease,” Emma.

16 thoughts on “REVIEW/RESPONSE: C. S. Harris’s WHO SLAYS THE WICKED”