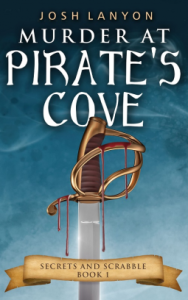 Lanyan writes in her author’s note to Murder At Pirate’s Cove: “While there may be (and there is) a romantic subplot, these stories are first and foremost mysteries. This may not be your cup of tea, but in these trying times, I find myself turning more and more often to the reassuring comfort of frequent murder in a world where justice always prevails and good will triumph” (Loc 2635). Like Lanyon, I do too. While we can find, in any mystery, “the reassuring comfort of frequent murder in a world where justice prevails, etc.,” and, in a romance, incipient, subtle, subplotty as it may be, the hope of the HEA, there’s something about the combination of the two, in a cozy setting, that makes it especially comforting. I devoured and delighted in Murder At Pirate’s Cove over a couple of days, with necessary breaks to cook, clean, bake, and joyfully actually see a friend in the flesh. Murder In Pirate’s Cove has all the elements of the cozy we know and love, cute small-town-setting, adorably intrepid hero, amusing place-names, a world that is as fantastical as Narnia yet familiar enough to make it an ideal living-place to the reader (despite the murder!), and, in Lanyon, a sly, droll homage to past cozy mysteries and a wonderfully witty writing style.

Set on Rhode-Island’s fictional Buck Island, where our hero, Ellery Page (a nod to Ellery Queen?) inherited Great-great-great Aunt Eudora’s “definitely underwater” (Loc 83-84), meaning in the red, mystery book shop and crumbling mansion. Ellery, a formerly-NYC-based screenwriter, came to Pirate’s Cove for a fresh start, after a bad break-up (cheating-ex, Todd, gets a few well-deserved quips). In the opening scene, Ellery is arguing with town money-man and small-town-real-estate mogul, Trevor Maples, who wants to buy Ellery’s bookshop. Ellery is ambivalent about his place in the town, but he wants to build a life in his new home. That “life” is jeopardized when Maples is found dead, in Ellery’s closed-up, after-hours shop, felled with the pirate sword that, until now in its manifestation as murder weapon, decoratively hung above the till. Ellery is Chief Jack Carson’s number one suspect. Small-town shenanigans and eccentric figures abound as Jack and Ellery work together and apart, with the dubious help of Ellery’s adorable new puppy, Watson, to catch the killer. If you read mysteries for the “mystery”, rather than the characterization and wit, be warned that even a plot-inattentive reader like yours truly figured out the whodunnit about half way through. What kept me reading and delighting? Read on.

For one, Ellery Page’s characterization. Despite good looks and former-glamorous-life-aura, Ellery is funny, self-deprecating, and humble. I loved him from the get-go when he declared himself, “no one had ever accused him of being overly sensible” (Loc 85). His wit (and thus Lanyon’s adept turns of phrase) shines in our introduction to Chief Carson, ” … in his late thirties, had sun-streaked brown hair and eyes the changeful color of sunlight on restless water. His voice was surprisingly pleasant for a guy who never smiled and seemed to live for handing out construction-code violations” (Loc 246-247). Of which Ellery has plenty, including a grumpy admonition about the state of his store locks.

Yet there is a pathos to Ellery as well, that inspires, like Watson, aw-filled exclamations: “Ellery was a stranger in Pirate’s Cove. He had no history, good or bad, no one could vouch for him, probably no one would even care if he ended up being arrested and convicted. That was the way the world worked. Everybody was busy with their own thing. Even people in small towns, where he had imagined it might be different. It wasn’t different” (Loc 694-696). With every slight little sadness, Lanyon would have me guffawing by the next page. Here is Ellery approaching Janet Maples, Trevor’s ex-wife as she sits in her stationery shop, Old Salt Stationery: “Ellery pinpointed Janet in her usual spot by the front counter, her bony nose stuck in a book titled The Courage To Be Disliked”. Or, as Ellery ponders his move from NYC to Pirate’s Cove: ” … he’d worked hard at different things and he’d saved up, but he had never been sure what he was working toward or what he was saving for. And then things with Todd had fallen apart, and he’d felt … adrift. Like what was the point of any of it? Not in a dramatic long-walk-off-the-pier kind of way, but more like cue Peggy Whatsherface Is That All There Is? … None of his friends and family in New York could understand why he’d felt the need to exchange the city that never sleeps for the village with narcolepsy” (Loc 1551-1557, 1996-1997). This combination of the poignant and droll made Lanyon’s not atypical cozy stand out and make me yearn for more in the series.

Sometimes, Lanyon takes the wit so far as to be utterly meta. I heart-eyes-emoji loved:

” … if this was a mystery novel, who’s our most likely suspect?”

She considered, “Well, perhaps only in an Agatha Christie novel. But you are the least likely suspect, which makes you the most highly suspect.”

Isn’t that marvellous? Wait till you read the Murder, She Wrote allusions! Here you’re also introduced to my second favourite character (maybe my third, I can’t make up my mind, because grumpy, stern Chief Carson is pretty adorable too), Nora Sweeny, Ellery’s geriatric, gossip-mongering, mystery-novel-aficionado-and-expert shop assistant. And, if I haven’t convinced you yet, how can you resist this cat-vs-dog-person convo:

“Sort of,” Ellery admitted. “We’ve adopted each other.” The pup yawned in his ear and tucked his head more comfortably beneath Ellery’s chin.

“Isn’t he adorable?” the mayor said in the polite tone of a cat person.

Add a soupçon of incipient romance between our lovable hero and the stern chief of police and there’s only one more thing that Lanyon need do to win my undying loyalty to her series: write a Christmas-set mystery for Ellery, Jack, Watson, and Pirate’s Cove’s eccentric denizens! With Miss Austen, we say Murder At Pirate’s Cove is indicative of “a mind lively and at ease,” Emma.

Josh Lanyon’s Murder At Pirate’s Cove is self-published. It was released on February 29th and may be found at your preferred vendors. I received an e-galley, via Netgalley.