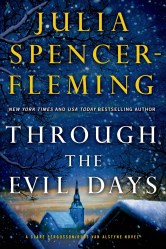 In January of 1998, I made my way to work amidst broken power lines, felled trees, and the ping-ping of ice pellets on the roof of my trusty Corolla. By the next day, Quebec, Ontario, and sundry US north eastern states, with whom we share a winter-affinity, were encased in ice, road crews, police, firefighters, and hydro crews working day and night to bring safety and light to 1000s, eventually millions. It was the first mass disruption to my daily work routine (the pandemic, the second) and reading Spencer-Fleming’s Through the Evil Days brought it back. Only someone who lives their winter like Canadians do, in this case Spencer-Fleming lives in Maine, close enough!, can render an ice storm as vividly as she did in this Clare Fergusson/Russ Van Alstyne mystery, her eighth. It is one element among many that Spencer-Fleming does well in a novel I consumed in a 24-hour period, following fast upon my too-leisurely read of One Was A Soldier. If you’re new to the series, be warned, spoilers ahead. If you’re a fan and all caught up, read on.

Through the Evil Days opens with arson and the murder of a retired FBI officer and his wife, foster parents to eight-year-old Mikayla, whose charred remains are not found in the fire aftermath. Mikayla, a liver-transplant survivor, has been kidnapped. Chief Van Alstyne and his team, familiarly beloved to long-time readers of the series, are on the case: Officer Kevin Flynn, carrying his torch for Officer Hadley Knox; deputy chief Lyle Macauley; dispatcher, Harlene, among others. We also open with the Fergusson-Van-Alstynes’ personal lives and Clare and Russ are loving and bickering and presently in professional quandaries. Clare’s bishop has censured her for being five and a half months pregnant when she’s only married for three … and Russ is faced with the financially-necessary disbandment of his police force.

The case goes in drug dealing and dangerous thugs directions, an ice storm encases Maine and yet, before the case intensifies, Clare and Russ embark on their long-delayed honeymoon at a remote lake-side ice-fishing cabin (needless to say Russ picked the location)def. Soon enough, Mikayla’s kidnapping and embroiling of her story with the drug-dealing ruthless figures converge on Millers Kill, Clare and Russ’s remote cabin, and their environs. The team is dispersed and separated by the storm, Flynn and Hadley on one end; Lyle and the part-time officers on another. Clare and Russ’s honeymoon turns into one of the most dangerous cases of their lives. The storm keeps everyone working, but apart, without each other’s support, ratcheting the suspense to teeth-gritting levels. While One Was A Soldier played with narrative time, splicing past and present, Through the Evil Days plays with space, interweaving scenes of hold-your-breath suspense chasing down the bad guys and trying to reach a little girl who will die within days if she doesn’t receive immunosuppressant medication. Add the reader agony of weather that stalls and endangers everyone and I stayed up into the night and read into the morning to finish, with a most satisfied reader sigh, Through the Evil Days.

In my romance-reader’s, character-obsessed humble opinion, Spencer-Fleming’s series has gotten better and better for focussing as much on her characters’ personal lives as on their crime-fighting. As a sleuthing pair, Russ and Clare are ideal: his rule-of-law focus matches beautifully with her priestly-spirit-over-letter perspective. Yet, they are joined by a mutual urge toward justice for the vulnerable: their methods 😉 may differ and they may argue to high heaven till they get there, essentially, they share the same values of justice and mercy. That enough would draw me to Spencer-Fleming’s series, but add a great love and realistic post-HEA marriage and she’s won me for life.

In One Was A Soldier and my previous post, I talked about how hard it was to recognize Clare and Russ in their new incarnations as vet and wise dude. In Through the Evil Days, though Clare still struggles with addictions and their marriage remains fragile from her unexpected pregnancy, the spirit-of-the-law and always examining her conscience Clare is BACK and I love her. Russ, on the other hand, truth be told, is a loving, lovable dick. His inability to be happy about the baby is maddening, but equally maddening is how protective, caring, and loving he can still be. Argh. I was in agony over the novel’s suspense and wanting Russ to “snap out of it” and rejoice in his impending fatherhood. Spencer-Fleming managed to torture me till the end, BUT my HEA-loving heart wasn’t left in the dust after all. Tonight, I start Hid From Our Eyes, which I hope to stretch out a tad longer than I did Through the Evil Days only to begin my tick-tock-molasses-clock wait for the next Clare/Russ mystery. Oh, and they acquire a dog, Oscar, only to make things more adorable than they already are.

If you’re looking to add yet another series to the many I suspect Miss Bates’s readers follow, well, let it be this one. Published by Minotaur Books, go way back to the first, In the Bleak Midwinter, start there and see if you can resist glomming the series.

4 thoughts on “Julia Spencer-Fleming’s THROUGH THE EVIL DAYS” 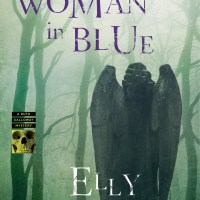