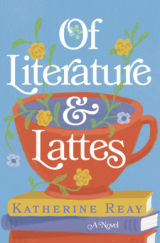 My initial response to Katherine Reay’s Of Literature & Lattes was: “this book is a mess”. Structurally, it’s all over the place. It opens in fictional-small-town Winsome, Illinois, from the point of view of the local bookstore owner, Eve Parker … whom we barely meet again. At first, I thought she was the heroine, given this is labelled a romance. She isn’t. A plethora of troubled and/or sad small-town characters show up. It was hard to keep track of what made them sad/troubled. Then, all of this within the first 20 pages, we’re catapulted to Palo Alto, CA, where one Alyssa Harrison is being investigated by the FBI because the company she worked for took clients’ medical information, ostensibly to predict future illnesses as a preventative exercise, but sold the info. Alyssa, her FBI interview still pending, gets into her car to make her way home, a journey and destination holding nothing but dread and failure. Home is, of course, Winsome, and there await her mother, Janet, an artist who works at the book shop, and father, Seth. Janet and Seth are divorced because Janet cheated and Alyssa, never sharing an easy mother-daughter relationship, has blamed Janet for her parents’ break-up. But Janet and Seth are dating again, forgiveness is in the air … and Alyssa walks right into it and hates it. We leave Alyssa and her troubled relationship with her mother to meet the new owner of the town coffee-shop, Jeremy Mitchell. He moved to Winsome and invested everything he owns in the town, sharing business responsibilities with his friend, Ryan, because he wants to be closer to his seven-year-old daughter, Becca. His marriage broke up soon after Becca was born and his ex-wife, Krista, is hell to deal with. His coffee-shop is not the success he’d hope because he doesn’t have the community spirit, as Ryan tells him over and over again.

Every page brings new troubles, new ways God pummels these characters, and new ways they have to figure out how to be better people. Sadly, they do a lot of backsliding: Alyssa fights with her mother; her mother is contrite, but proud, and fights back; Jeremy fights with Krista … neighbours die, funerals are held, new characters show up: some propose, some are happily married, some die, most are sad and no one seems able to have a light-hearted moment. Not even the plot moppet, Becca. There is also this strangely corporate high moral ground held throughout, with Alyssa’s talent with numbers and business-know-how made virtuous, as are all business ventures, as long as they’re operating in a small-town full of sinners trying to be better people. If there’s one thing I can say for Reay, for an inspie writer, at least her characters occasionally have a brew, or mimosa and they do serious sinning, like infidelity and copious anger.

I stuck to this to the bitter end, if for no other reason than I wanted one iota of humour, one ray of warmth, possibility, or ROMANCE. Which, by the way, if this is why you pick up this novel, there isn’t any. Alyssa’s head for numbers sees her being recruited to help with struggling businesses and ends up helping Jeremy and the in-the-red new coffee-shop (there be reasons and they include some high school Golden Boy employee selling drugs … where did THAT come from?). Jeremy and Alyssa share two lacklustre kisses and end up together by the last page, not committed, or declaring eternal love, but Alyssa is serving coffees at Jeremy’s new book club hosted at the coffee shop (hence the title, I guess). They seem to like each other, but there isn’t any attraction and they barely spend more than, oh, two pages together. In sum, Of Literature and Lattes has a lot of broken people in it. I think there are lessons about God’s grace and sheer human will, despite the constant backsliding, to do better and be better. Having an small-town entrepreneurial spirit is a virtue. There’s healing for Alyssa and her mother, reconciliation between Janet and Seth, and a spark of hope for Jeremy’s coffee venture. Many moral lessons are taught through literature, like Steinbeck’s lugubrious Of Mice and Men. In the end, like my previous read, I was just glad this book was over. With Miss Austen, we deem this was “downright labour,” Emma.

Katherine Reay’s Of Literature and Lattes is published by Thomas Nelson. It was released in May and may be procured at your preferred vendor. I received an e-galley from Thomas Nelson, via Netgalley.