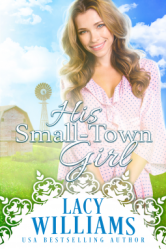 Lacy Williams’s His Small-Town Girl isn’t a perfect romance, but it is true to the genre. And that was something I wanted to read after two lugubrious duds. Williams came from one of my favourite category lines, with favourite authors too, Harlequin’s “Love-Inspired” historicals (aka inspiehistrom). Since that line shut down, she has navigated to self-publishing and this series is, I would say, “kisses-only” contemporary, ne’er a soupçon of inspie content. But it still carries her ability to draw characters, write a fine line, and create a heart-tugging romance. There is something alive about Williams’s characters: they reach out to the reader and the reader cares about them. Even though overall His Small-Town Girl is an angsty read, the quick-fire, at times banterish exchanges between hero Cord Coulter and heroine Molly English lend a light, engaging touch. Angsty as heck is what these two are: Cord has returned to Sutter’s Hollow after years away in Houston to repair and sell his legacy, his grandmother’s run-down ranch. Orphaned with his baby brother, Cord suffered at the hands of his grandmother (and she’s never redeemed, which is a good thing in a contemporary that avoids the all-sunshine label in small-town Texas). As he tries to bring order into chaos, deal with an impending mortgage, and not lose his general contracting work back in the city, Molly English comes walking onto his ranch, sunshine to his grump, willing to do any labour to stay.

Despite her cheerfulness, ace-cooking skills, the cinnamon she adds to his coffee, and her mean ranching know-how, Molly’s life is shadowed by ugliness: a man she dated a few times became a stalker. Cord’s ranch, and soon Cord himself, are physical and emotional shelters. She repays with kindness, humour, hard work, and mad skills. While the bad guy who haunts Molly plays out his nasty and the bad memories that haunt Cord come home in so many ways, Williams never loses sight of the growing relationship between Molly and Cord, built on shared work, space, mutual attraction, genuine conversation, and delightful banter. Molly and Cord are also just plain likeable. They’re kind and caring, honest and true. And though there’s struggle and resistance on both their parts to admitting how they feel about the other, given the newness of their feelings and togetherness it’s understandable, they never hide how they feel, or pretend. They simply need to understand their feelings. Then Williams does something I’ve always loved in a romance, no matter the heat level, she depicts the importance of devotion as the basis of the HEA. Too many romances, like the recent much-lauded Rakess, treat devotion as something that is binding instead of freeing. Yes, the hero and heroine love the other, but personal autonomy is uppermost. Williams never loses sight that devotion comes easily with love. Maybe His Small-Town Girl‘s romantic suspense plot is clichéd and predictable, but Molly and Cord are loveable and their care for each other is restorative in a way that romance rarely is these days. With Miss Austen, we’d say His Small-Town Girl offers “real comfort,” Emma.

Lacy Williams’s His Small-Town Girl is self-published. It was released in May and may be found at your preferred vendors. I received an e-galley, via Netgalley.