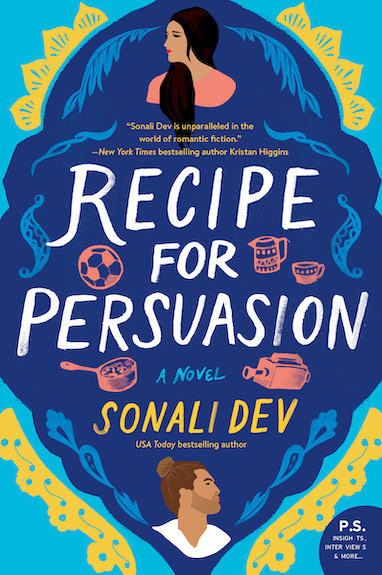 I admit I was super-pumped to read Dev’s second “Rajes” romance because I adored Pride, Prejudice, and Other Flavours. Moreover, though I can never quite come to a conclusion, it’s possible Persuasion, with its older, melancholic hero and heroine and their second-chance-at-love romance, may be my favourite Austen. And Recipe For had that rom-com publisher designation and a compellingly-Bollywood-ish storyline, signature Dev. From the back cover blurb:

Chef Ashna Raje desperately needs a new strategy. How else can she save her beloved restaurant and prove to her estranged, overachieving mother that she isn’t a complete screw up? When she’s asked to join the cast of Cooking with the Stars, the latest hit reality show teaming chefs with celebrities, it seems like just the leap of faith she needs to put her restaurant back on the map. She’s a chef, what’s the worst that could happen? Rico Silva, that’s what. Being paired with a celebrity who was her first love, the man who ghosted her at the worst possible time in her life, only proves what Ashna has always believed: leaps of faith are a recipe for disaster.

FIFA winning soccer star Rico Silva isn’t too happy to be paired up with Ashna either. Losing Ashna years ago almost destroyed him. The only silver lining to this bizarre situation is that he can finally prove to Ashna that he’s definitely over her. But when their catastrophic first meeting goes viral, social media becomes obsessed with their chemistry. The competition on the show is fierce…and so is the simmering desire between Ashna and Rico.  Every minute they spend together rekindles feelings that pull them toward their disastrous past. Will letting go again be another recipe for heartbreak—or a recipe for persuasion…?

This “rom-com” publisher hint may drive me batty. Hear this, fellow readers, Dev’s novel is light on rom and zilch on com. I had issues with Recipe for Persuasion, but I don’t fault the author on how publisher’s choose to market books.

The com part of Recipe was only evident when Ashna’s cousins were around, Trisha and Nisha. They provided that breezy, humouring-you love that is the sign of committed, long-standing connection and I enjoyed it very much. I can’t say the same for Ashna, Rico, or their backstories. The frame for their re-unification is totally cool and fun; I love cooking and cooking shows, podcasts, you name it, and the setting is a delight, as are all the scenes set in it, which are, alas, too few.

However, the novel is bogged down by Dev’s Achilles’ heel: the declarative piling-on of misery upon misery, where what could be moving melodrama becomes eye-rolling cloyness. First, she kills off Rico’s parents, orphans him in California as a teen, and that provides the frame for his meeting with high school Ashna. This makes Rico super-needy and when Ashna seemingly rejects him, he devolves into soccer-super-star who feels nothing. And yet, Ashna makes him feel too much and everything. BTW, he isn’t paired up with her, he asks to be, hoping to exorcise her forever. Famous last words.

But it’s Ashna’s misery-fest background that takes the cake: her mother, a charitable foundation Indian super-star who’s done more to improve and empower girls and women than the most feminist of feminists, but who was absent from Ashna’s life when girl- and teen-Ashna needed her. Now Ashna has steeled her heart against her. Ashna’s beloved father, in turn, left her in a horrific way … spoiler ahead, but also CW, when he committed suicide and teen Ashna found him in the restaurant kitchen. Ashna still suffers the psychological effects, understandably, and is diagnosed with all manner of psychiatric conditions as a result, none of which are given due time and care, though Ashna does seem to have some kind of yoga therapist? But the misery-fest grows like mushrooms overnight when we learn Ashna’s mother’s backstory: one comprised of parental coercion and rape. By the end of Recipe for Persuasion, I was gasping for relief.

The relief came in the form of the adoration of the mother’s and daughter’s men. Yes, Shobi was in love when she was coerced into marrying Ashna’s father. Which would be great, you’d think, don’t these two women deserve an adoring, funny, intelligent life-partner? Of course they do. Except there’s this strange thing that Dev does: whereby the hero’s identity, his fleshiness, his very being is subsumed into a love for the heroine. They are left without much personality, dissolved into a puddle of admiration and need. I guess this is nice, it could work for many readers, but it left me quizzically indifferent. I wish I could have loved this. If only there were more cooking scenes …

Miss Austen and I are not pleased and we deem Recipe for Persuasion “downright labour,” Emma.