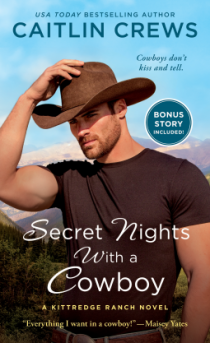 When I started Secret Nights, I thought I would end up DNF-ing; instead, it sucked me in and I read into the wee hours and again at dawn. I’m groggy and tired, but trying to understand why I enjoyed it as much as I did. To start, I think the reason I thought I would DNF is there’s something about Crews’s narrative voice that grates. When I start one of her novels, I’m instantly turned off by the feeling she’s leading me along her narrative; I can see her composing on a computer. If I end up enjoying the novel, then it’s because, despite that intrusive storytelling voice, the sheer romance-y-ness of it is compelling. In this case, it was (in others, not) and I don’t even enjoy marriage-in-trouble romance:

Riley Kittredge has always known exactly what he wanted. His land, his horses. His woman. He met and married Rae Trujillo far too young, and their young love combusted right after they said their vows. But their passion has never managed to burn itself out. Yet when Rae shows this time, it’s not a night of pleasure she demands, but a divorce. Rae should have moved on a long time ago. She knows she and Riley just don’t work. They might make great lovers, but that doesn’t make a marriage. And now Rae wants a new life, complete with a baby. But when her husband offers to be a father, to give her the family she’s always secretly desired, she and Riley will both have to face demons from their past—and choose love over fear at last.

Riley and Rae were high-school sweethearts and their young love didn’t exactly combust until “something happened” and Rae left Riley to move back in with her parents. Then, for the next eight years, Rae drove to Riley’s horse ranch, to the house he built for them, to fight and have sex. Eight years of yelling and sex doesn’t seem plausible to me because surely a person needs some peace and friendly conversation? What do I know, though, spinster that I am? A friend of mine once told me that her 30-year marriage consisted of yelling and great sex, so maybe? In any case, when the novel opens, Rae asks Riley to divorce because she wants to have a baby. Her friend Abby’s baby, Bart, has set all hormones firing. This is less of a plot point, in the end, than the blurb suggests and that was a good thing. I’m glad baby-making didn’t play such a great role, instead the working out of a relationship where’s there’s a lot of love, but not much by way of understanding, forgiveness, or communication.

Those “secret nights” in the title? Not so secret. The town of Cold River knows all about Riley and Rae and their public separation and private marriage. The only secrets are the ones Rae is keeping. While I’m rubbish at guessing the whodunnit, I’m pretty good at romance “sekrets” and I’d figured out what was going on, given Rae’s internal monologue of pain and suffering, way before she finally told Riley. Poor Riley, despite rugged good looks and elemental-as-the-Colorado-mountains stoicism, was clueless. In eight years of fighting, you’d think Riley would have demanded some answers, but I guess being as elemental as earth and sky also makes you silently forebearing. Except this also made Riley self-righteous in his patience and love and made Rae immature and mean in her temper tantrums. While I hate to admit it, this made for compelling reading.

The latest romance trend for rom-coms is about the meet-cute. I love a meet-cute (see my review of Pineapple Girl), but a convention we don’t see as much in these cartoon-cover-rom-com days is the “line in the sand”. In friends-to-lovers and marriage-in-trouble, the relationship opens in a state of stasis, where the couple has been playing out the same old patterns over and over again. Then, in place of the meet-cute, comes the “line in the stand,” the point at which one of the two protagonists seeks to change the pattern and the other reacts, that is, resists the change. I think what I found compelling about Crews’s romance was that one “line in the sand” follows another, inexorably as hero and heroine navigate relationship change, one or the other decides what they’ll tolerate/accept or not, the more “nots” the less believable the HEA; the more compromises, the more convincing the HEA. The narrative moves like a murder mystery, whodunnit and whydunnit become “Will they work it out?” If that narrative impetus is maintained with great dialogue (Crews’s is especially fine) and, in this case, family and friends who give key advice (one of Crews’s strengths), then it works.

While I remained annoyed at Crews’s storytelling tone, there were moments of good writing, which made me pause, smile, and appreciate them. Like: “Because fighting and making up was … fighting and making up. It wasn’t a relationship. War and sex wasn’t putting down roots, it was tearing them up. It wasn’t Corinthians.” That final little reference, to the Bible verse that is quoted in more weddings than Khalil Gibran (thank the wedding gods for that mercy), it was good and apt. Riley and Rae could use some “patient and kind”. Once they realize that, both of them, there’s not much left to the HEA, which came a tad too patly, but I was no less glad for Rae and Riley.

Caitlin Crews’s Secret Nights With a Cowboy is published by St. Martin’s Paperbacks. It was released in December 2020 and may be found at your preferred vendor. I received an e-galley from St. Martin’s for the purpose of writing this review.