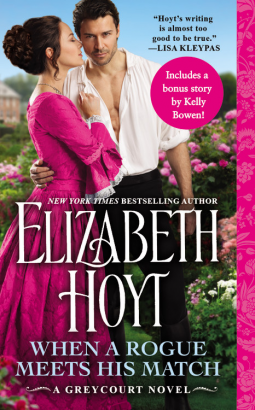 Ambitious, sly, and lethally intelligent, Gideon Hawthorne has spent his life clawing his way up from the gutter. For the last ten years, he’s acted as the Duke of Windemere’s fixer, performing the most dangerous tasks without question. Now Gideon’s ready to quit the duke’s service and work solely for himself. But Windermere wants Gideon to complete one last task, and his reward is impossible to resist: Messalina Greycourt’s hand in marriage. Witty, vivacious Messalina Greycourt has her pick of suitors. When Windermere summons Messalina to inform his niece that she must marry Mr. Hawthorne, she is appalled. But she’s surprised when Gideon offers her a compromise: as long as she plays the complacent wife, he promises to leave her alone until she asks for his touch. Since Messalina is confident that she’ll never ask Gideon for anything, she readily agrees. However, the more time she spends with Gideon, the harder it is to stay away.

There’s much more to Gideon and Messalina than a deal: she gets a portion of her massive dowry; he, gets her. In a month. Until then, it’s a waiting-game which Hoyt develops beautifully into a relationship. Gideon and Messalina argue, laugh, share dinner and a theatre outing, social events: she polishes him and shows him the pleasures of life while he teaches her what it means to be poor and desperate, what it’s like to grow up a guttersnipe in St. Giles, to fight for your life daily. Not all is rosy and understanding to start: ” ‘You, madam wife, are sheltered.’ ‘What does that mean?’ she demanded. He turned and finally looked straight at her, the anger still blazing in his black eyes. ‘You’re an aristocrat.’ She was…not hurt. ‘You’re a cur.’ ” This is how it goes between them and it’s pretty delicious banter. Gentle teasing ensues, however: “Inside was a small table by the fireplace set with various dishes. Messalina stopped short. ‘Where did this all come from?’ ‘A very mysterious place,’ he murmured as he pulled out a chair for her. ‘It’s called the kitchen.’ ” (The betrayal scene is marvellous, btw, and has breath-holding stakes and potential emotional and moral consequences.)

Gideon and Messalina, in conversation, are engaging in a way Kester and Freya weren’t. Underlying their budding relationship are romantic suspense plots: the uncle is an evil man, whose cruelty is foiled by the end, but not ended. His Nastiness will be back and, frankly, I look forward to Uncle Augustus’s nefariousness in the next Greycourt novel. The novel’s resolution? Firstly, I saw how Uncle Augustus would be foiled a mile away, which is fine. The development, however, was truncated; Hoyt could have included one particular scene-encounter between Gideon and a fascinating, thus-far secondary character, Julian Greycourt, Messalina’s elder brother, that I was eager to read. Moreover, the actual villain of the piece, with one tiny, easy-to-read hint along the way, made for an abrupt, out-of-the-blue end. The HEA and dénouement did appease the savage-reader breast. In sum, I wanted more. With Miss Austen’s guidance, I would say When A Rogue Meets His Match offers “real comfort,” Emma.

Elizabeth Hoyt’s When A Rogue Meets His Match is published by Forever. It was released in December 2020 and may be found at your preferred vendors. I received an e-galley from Forever, via Netgalley, for the purpose of writing this review.

4 thoughts on “Mini-Review: Elizabeth Hoyt’s WHEN A ROGUE MEETS HIS MATCH (Greycourt #2)”