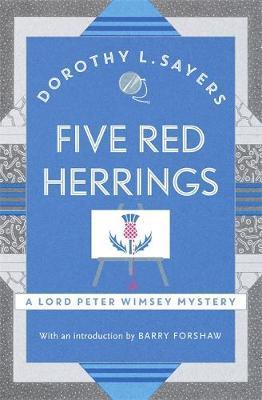 When you read a lot of bad prose as a high school English teacher, you hunger for the good stuff, which is how I ended up reading two books this brutal work week (reports to write, papers to grade, meetings to attend, you get the picture), Dorothy Sayers’ Five Red Herrings and, in one Saturday-into-Sunday swoop, Andrew Sean Greer’s Less. I didn’t think, going from one to the other, they had anything in common and they don’t, except attractive, blond, wiry, irrepressible protagonists and scenes of macabre or absurd humour.

I’m on a two-year best-laid plan to reread Sayers’ Lord Peter Wimsey books, Five Red Herrings (1931) followed one of my favourites, Strong Poison. Herrings is Vane-less, sadly, and contains a significant number of scenes sans Wimsey too; ONLY ONE HILARIOUS BUNTER SCENE, a tragedy, because we can never have too much Bunter.

I don’t care for the whodunnit variety of murder mystery: one murderee, an artist named Campbell, a hateful dude, truculent and dour, and five suspects, also artists, implicated in hating/resenting/plain-disliking Campbell. Set in a Galloway artists’ colony, Lord Peter Wimsey is taking a hol, doing some fishing (thank goodness he doesn’t seem to ever play golf), and solving a murder. Bunter is nonplussed by what the Scots call their cuts of meat and Sayers’ talent to draw character and write vernacular are brilliant. And yet, I didn’t love it. A paucity of Wimsey scenes and the detailed rendering of plottish points about who was where, which train they took, and who saw them when, take narrative precedence.

What did I love about it? Wimsey, of course. Saltimbanco-esque in demeanor, shrewd, black-humoured, he has an endless appetite, delightfully so, even for food. In a variety of scenes, he consumes: “potato scones” and “ginger cake”; “stewed beef with thick gravy and vegetables” and “cheese soufflé”; “grilled steak and chips” and a “rhubarb tart”. And yet, one has the impression Wimsey remains whipper-slim, as what consumes him is nervous energy, as Sayers tells us, Wimsey is “palpitating” as he plunges into an investigation “cheerfully”. There is something other-wordly, fey, about him. He perches on stones, pokes the ground with long, tapering, investigative fingers and, from one moment to the next, transforms from lazy, sleepy-eyed aristocrat to a wildly dangerous, perspicacious man, the one who led his men in battle in the Great War.

While I’m not a fan of methodical, let’s-strike-suspects-off-one-after-another narrative, Sayers’ literary infusions into this very thing make for pleasurable reading. There is, for example, her use of Shakespearean allusion, to keep my Bardish-love bright and present: Campbell’s death, welcome by all who knew him, is described as “Nothing became him like the leaving it.” *chuckle* And Sayers, bless her, finally helped me understand what was behind my great antipathy for Desdemona; in describing one of the suspect’s wives, Wimsey thinks of her as “stupid and dangerous, like Desdemona”. “That’s it,” I cried in mid-page, “that’s exactly it!”

There are, in turn, several passages of Sayers’ brilliant meta-mystery-narrative commentary: as Wimsey quips, ” ‘They want to find the last person who saw the man alive,’ said Wimsey promptly. ‘It’s always done. It’s part of the regular show. You get it in all the mystery stories. Of course, the last person to see him never commits the crime. That would make it too easy. One of these days I shall write a book in which two men are seen to walk down a cul-de-sac, and there is a shot and one man is found murdered and the other runs away with a gun in his hand, and after twenty chapters stinking with red herrings, it turns out that the man with the gun did it after all.’ “(129-30). Sayers comments on the absurdity of the mystery narrative and, at the same time, undermines the conceit even while she uses it just because she can. (She also pokes fun at some of the genre’s “giants”: Collins and Conan Doyle.)

The ending is a cleverly methodical pointing to the genre’s reliance on competing narrative truths: but one of these things is not like the other. Wimsey allows the police forces around him and the suspects themselves to present their narratives and then proceeds to poke holes in them like a punctured back-yard kiddie pool, until there’s nothing left but a carcase of untruths, except for Wimsey’s. (On a final note, a CW: Sayers makes free with a racist term, once, early in the novel.)

While Sayers’ Wimsey stands above us in knowledge and intellect, Greer’s Arthur Less is easy enough for the reader to look down on. About to turn 50, Arthur Less embarks on a picaresque journey running away from attending his former lover’s wedding. Less is an anti-Ulysses: not running to, but running from (it’s telling that his one successful book, Kalypso, tells the story of a gay man who helps a marooned sailor return to his wife). What Arthur is actually running from is “time’s wingèd chariot”. When the novel opens, Less sits in a hotel lobby “staring at his betrayer, the clock,” ignorant that it is behind; time runs from him and chases him all at once. But this is not a tragedy: in its own way, it’s a romance, with a definite HEA. What comes between that first scene and the HEA is Arthur’s journey, in beautifully-rendered Sedaris-esque scenes which had me snorting, guffawing, yelling out in laughter at Greer’s wit.

Even if I didn’t love Arthur Less, which I do, there is much delicious writing to enjoy. I knew the book “had me” from its first few pages, like Greer’s description of a hotel buffet “where deli meats fan across a folding table”, or Less’s description of impending middle age, “Somewhere in there he lost the first phase of youth, like the first phase of a rocket; it had fallen, depleted, behind him. And here was the second. And last.” Or the brilliance of why he broke up with one lover because “the sex was awkward, too specific” (which, btw, can double as a brilliant critique of “certain” romance novel love-scene writing).

Greer’s Less-world is a world askew: Less is either late, or early, loses luggage or finds it, ends up in the wrong queue to board his plane, even near the end, goes to the wrong writing retreat. Yet, like the Road Runner, Less outruns every danger, overcomes every obstacle, and avoids every disaster. Less is the car that makes it past the rift that will open in the road from the impending earthquake. Less is hapless and charmed. One of the most hilarious, and hence my honouring Greer with being “Sedaris-esque,” is how Less navigates language, as he enters countries where he has none, or near-none of the native tongue (his Berlin stay and attempts at German reminded me, because they’re as hilarious, of Sedaris’ “Me Talk Pretty One Day”), or those he meets also struggle with communication:

“Welcome to Mexico.” Arturo hands him a conference packet and looks up at him wearily; violet streaks curve beneath his eyes, and lines are grooved into his still-young-brow. Less notices now that what he had taken for gleaming bits of pomade in his hair are streaks of gray. Arturo says, “There follows, I am sad to say, a very long ride on a very slow road…to your final place of rest.” He sighs, for he has spoken the truth for all men.

Just this passage tells you what you need to know about Greer’s writing: who hasn’t swayed, in a too-hot bus on a too-hot day, in Mexico, Greece, the Middle East, etc. to one’s “final place of rest,” a spare hotel room with a desultory spinning fan. Like this one exemplary passage, Greer’s Less is equal parts memento mori and joie de vivre, about not understanding the world and one’s place in it and making one’s way, Road-Runner-like, in it. It’s Elizabeth Bishop’s “One Art” and Marvell’s “To His Coy Mistress”. It’s about time’s passage, the grey streaks in Arturo’s hair, and the illusion of truth and beauty that keeps us going, hoping, seeking. I read Less because I listened to Pamela Paul on the NYT book podcast sing its praises. I’m glad I did, Less was more than I ever expected it to be.

17 thoughts on “Having Read Sayers and Greer”