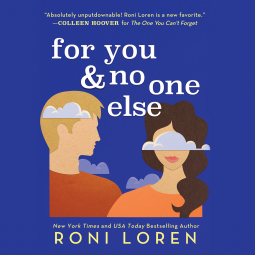 I knew I was taking a gamble listening to Roni Loren’s For You and No One Else for two reasons: one, I’ve struggled getting through a romance at all these days; and, two, I did not enjoy the first in the series, Yes and I Love You. I can’t say anything about #2 because, having been burned by #1, I didn’t read, or listen to it. And that’s the main reason why I settled on this one: I could listen to it, maybe that would help get some of my romance mojo back. It did and it didn’t. I enjoyed it, think it’s likely the best of the series, can safely assume contemporary romance fans will enjoy it, but I still grew impatient with the genre’s flaws and won’t be rushing out to read as much romance as I used to. But maybe, just maybe, I can take the genre in small doses, preferably aurally.

To start, for some background and context, the novel’s blurb:

“Eliza Catalano has the perfect life. So what if it actually looks nothing like the story she tells online? As a therapist, it’s part of her job to look like she has all the answers, right? But when she ends up as a viral “”Worst Date Ever”” meme, everything in her Instagram-filtered world begins to crumble.

Enter the most obnoxiously attractive man she’s ever met—and a bet she can’t resist: if she swears off social media for six months, Beck Carter will teach her the wonders of surviving the “”real world.”” No technology, no dating apps, no pretty filters, no BS.

It seems like the perfect deal—she can lay low until her sudden infamy passes, meet some interesting new people, and maybe even curate this experience into a how-I-quit-the-online-dating-racket book along the way. But something about Beck’s raw honesty speaks to Eliza in ways she never expected. She knows he’s supposed to be completely hands-off…but as complex feelings grow and walls come tumbling down, rough-around-the-edges Beck may be exactly what Eliza needs to finally, truly face herself—and decide who she really wants to be.”

Loren has many strengths, though I think they’d be more evident in a first-time Loren reader in her first series, Ones Who Got Away. Nevertheless, I could see what attracted me to Loren’s writing in For You and No One Else, which the first in the series had me doubting.

One of those strengths is Loren calling on her mental health counselling expertise to round out her characters and show their growth. That “show” sometimes slips into “tell”, but it still makes for often believable, likeable characters. That is certainly true of Eliza and Beck. Loren has a knack for characters who work towards revelations about themselves and act on them: this makes for a romance that is slow-moving emotionally even when the bedroom scenes (one too many and too explicit for my taste) are frequent and arrive early in the narrative.

In Eliza’s case, she has set herself up, despite her therapist’s training (Loren rightly shows how physicians can’t heal themselves) to seek, via SM, what she wants for her personal life: a loving marriage like her deceased parents had and children. Beck is her opposite: as we slowly learn, he has reason to be wary of SM, commitment, and especially marriage. Both are wrong and both are right, in that, in the end, they don’t have to change where they’re coming from: they have to redefine what they want, who they are, and how they can be together. It’s lovely.

Loren’s second strength is humour and this shines through in Eliza and Beck’s banter and the antics of their pets. How they come by their beloved animals is one of my favourite scenes. As Eliza and Beck build their friendship (also nicely done on Loren’s part), Eliza confesses to Beck her desire for a dog, part of her family-building strategy. When Beck accompanies Eliza on her foray into the pet-adoption agency, he is, instead, “adopted”, “chosen” really, by Trent, a cantankerous cat, possessive, jealous, and demanding. Their interactions are a hoot, as are Eliza’s with her adopted furry friend, the mild-mannered, people-food-begging dog, Mabel.

And those flaws? They are obvious: this thing was just too darn long, always the Achilles heel of any romance that isn’t category length (sadly, category romance, because it’s often a stop-over to the longer, more lucrative forms, now suffers from weak writing, creaky, trite plotting, and flat characterization, wish I could find some good ones). Moreover, in For You and No One Else, there are too many bedroom scenes, too much build-up to the betrayal, which flashes like a lighthouse to the reader-ship in the night, and too long by the time these two mature people learn to be honest with each other.

For You and No One Else is not a romance that breaks any ground for the genre (let’s face it, those are rare, a Molly O’Keefe or a Cecilia Grant, a Jennifer Crusie or a Mary Balogh, don’t come too often to any genre), but I don’t think it’s fair to expect that of every romance novel we read. It was great to get a dose of HEA (though the epilogue went on for ages) and a well-written romance about two deserving, eventually mature people getting the love and life everyone would want. The narration, by Desiree Ketchum, was nicely paced and emotionally engaging; her voice has a lovely timbre, though I wish her mouthfuls of Beck’s f-bombs were less forceful. On Miss Austen’s scale, Loren’s For You and No One Else rates at “almost pretty,” Emma.

I am grateful to Dreamscape Media for the audio-galley granted to me, via Netgalley, and the opportunity to listen to and review this audiobook.

17 thoughts on “Audiobook Review: Roni Loren’s FOR YOU AND NO ONE ELSE (Say Everything #3)”