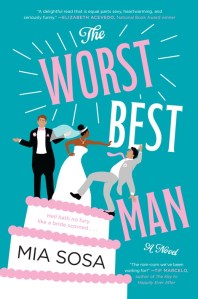 Because I’m not a great fan of rom-coms, I couldn’t believe how much I liked Mia Sosa’s The Worst Best Man. Though I’m not a fan of first-person romance-narration, especially when it alternates H/H POV, there was so much to like about Mia Sosa’s The Worst Best Man. The humour. The ethos. The secondary characters. You’ll notice that I didn’t mention the romance. I can’t say I loved the premise either, but Sosa made it work for me. Carolina “Lina” Santos is left at the altar by Andrew Hartley, thanks to a heart-to-heart the night before the wedding with his younger brother, Max. Cue three years later. Lina is up for a wedding planner job with the luxury-hotel-chain CEO Rebecca Cartright. Whose firm is assigned to work with her on her pitch? Double-nemeses Max and Andrew. To sweeten the competition, Rebecca assigns Max to work with Lina and Andrew with her competition. In a Top-Wedding-Planner showdown, Max and Lina have five weeks to prep their presentation and score the account. There is much at stake for both, financially, also professional pride and family approval.
END_OF_DOCUMENT_TOKEN_TO_BE_REPLACED

Like Clayborn’s hero, Alex Averin, I don’t like “luck” … well, the idea of it, anyway. I don’t like its randomness and I don’t like its hidden possibility in what might NOT happen. It played a much larger role in Clayborn’s third “Chance Of A Lifetime” romance than in the previous one I’d read. In Luck Of the Draw, luck was the set-up: three friends win the lottery and how they use the money puts them in certain circumstances, ones they wouldn’t’ve been in had they not won. It didn’t seem all that important to Luck Of the Draw, but in Best of Luck, it becomes an ongoing debate between hero and heroine. Heroine Greer Hawthorne has reason to believe she’s lucky, not only because of the money she won, but what fate dealt her: an illness that marked her childhood and adolescence and continues to be a daily reminder of both how lucky she is and how unlucky. What are the odds of being diagnosed with a life-altering birth-defect? As good as the odds that the surgery Greer had would help her lead a more active, engaged life. “Luck” for hero Alex is a bane and reminder of a childhood of want and neglect, thanks to his “luck-dependent”, gambling-addicted father. END_OF_DOCUMENT_TOKEN_TO_BE_REPLACED

As a spinster of modest means, Miss Bates was intrigued by Rogers Maher’s premise for Rolling In the Deep. Who doesn’t buy the occasional lottery ticket and dream big? Ramòn “Ray” Lopez and Holly Ward stock shelves at a Poughkeepsie Cogmans, a “Walmart-like” superstore. Single-mum Holly is a Cogmans veteran; Ray, a newcomer. They shoot the breeze when they share an aisle, tell each other about their lives, and harbor a shy attraction. Holly survived a nasty divorce. Brett, her ex, and she share custody of Drew, their eight-year-old son. Brett, a cheating, domineering husband, is still nasty, insulting and demeaning Holly. She is anxious and self-effacing. She believes Drew is better off with his father: there’s a marked difference between the quality of Drew’s life when he’s with Brett and his wife Emma and when he’s with Holly in a dreary apartment and sparse life-style. But she’s “too selfish” to give him up; she loves him. At first, Ray appears the cheerier of the two. Newly arrived from Queens, Ray works two jobs, at Cogmans and a local restaurant, hoping to fulfill his recently-deceased mom’s wish for him to attend culinary school. Ray carries an uprooted grief, but seeing Holly smile and chat make him happy. He wants a date, but senses her single-mum’s caution. On a lark, he asks her to go halfsies on a Powerball ticket. When they win eighty million dollars apiece, their fledgling attraction and financially-straitened lives change overnight.
END_OF_DOCUMENT_TOKEN_TO_BE_REPLACED